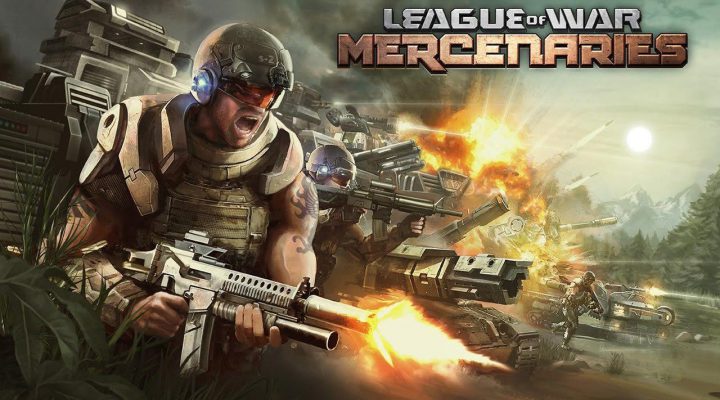 Lots of units to upgrade and collect.

Can plan ahead, against enemy configurations.

Some units are incredibly stronger against others.

Generic city-building mechanics dull the rest of the game.

League of War: Mercenaries released recently into a mobile market saturated with “Noun of Noun” city-managing, soldier-harvesting mobile games. Mercenaries’ twist is that players collect units that they deploy in real-time on a battlefield, not unlike the current king of the mobile games kingdom, Clash Royale.

Funzio’s army-management game puts players in charge of maintaining a mercenary army. Players build up their base and construct buildings necessary to farm resources over time and upgrade and unlock their army’s units. Units come in three types: tanks, recon (think APCs), and infantry, and are all divided up into color-coded specialties — but more on that in a bit. 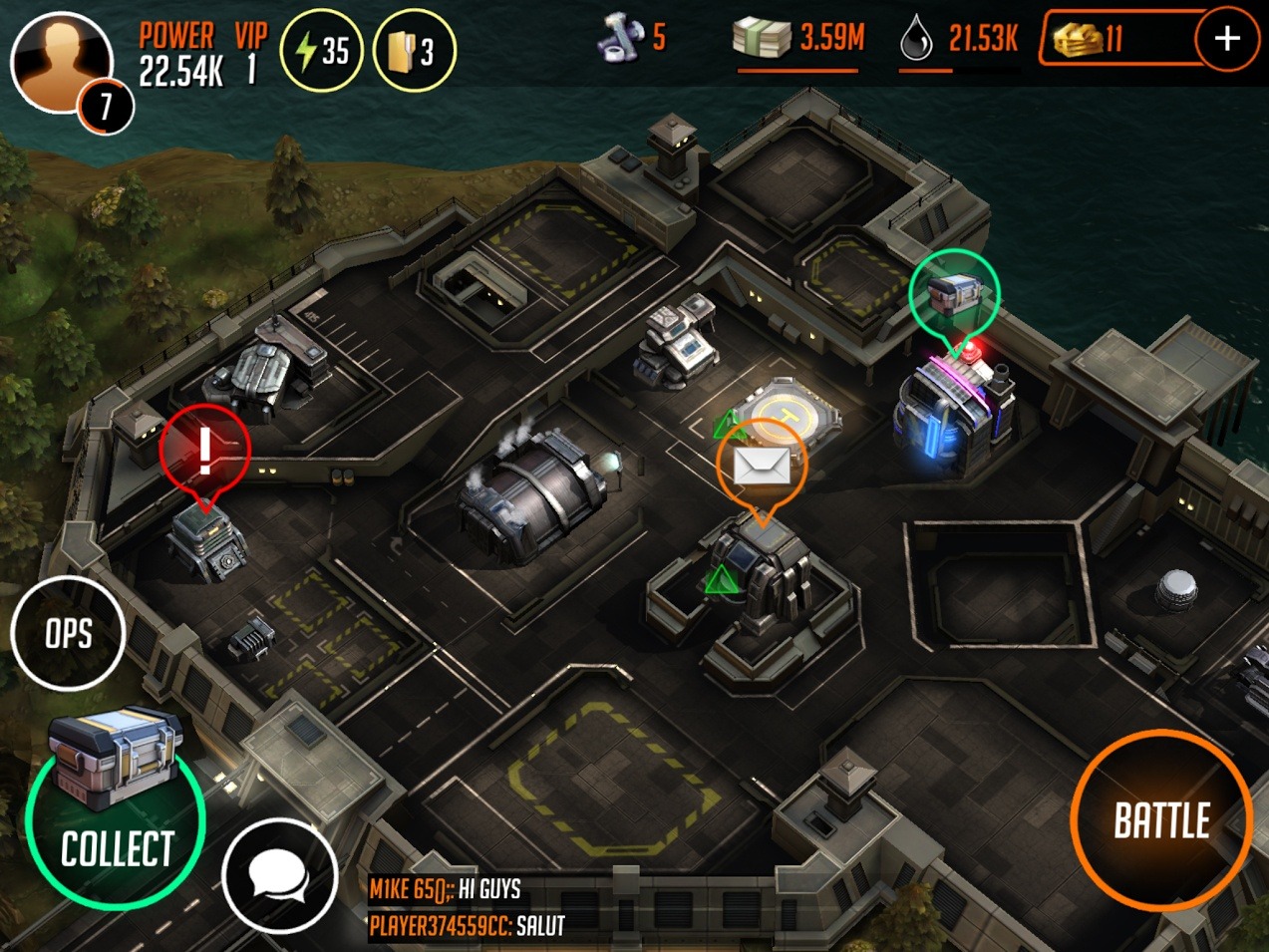 Once players learn the basics of base-building and unit management (which doesn’t take long if they have ever played a mobile strategy game before), they are ready for their first battle. In League of War: Mercenaries, battles take place in the small field between two bases: yours and the enemy’s base. Players come into battles with a chosen group of units (ideally countering the enemy units displayed before the battle begins) that they can deploy.

These units will automatically move towards the enemy base, stopping only to battle the enemy troops encountered on their short march. If no enemies are present on the battlefield, the friendly units will proceed to attack the enemy base. Deal enough damage to the enemy base and it will explode, and the battle is won. Each unit costs a certain amount of resource (the game’s variation on mana) to deploy, and that resource refill gradually over time, allowing players to continually churn out units. 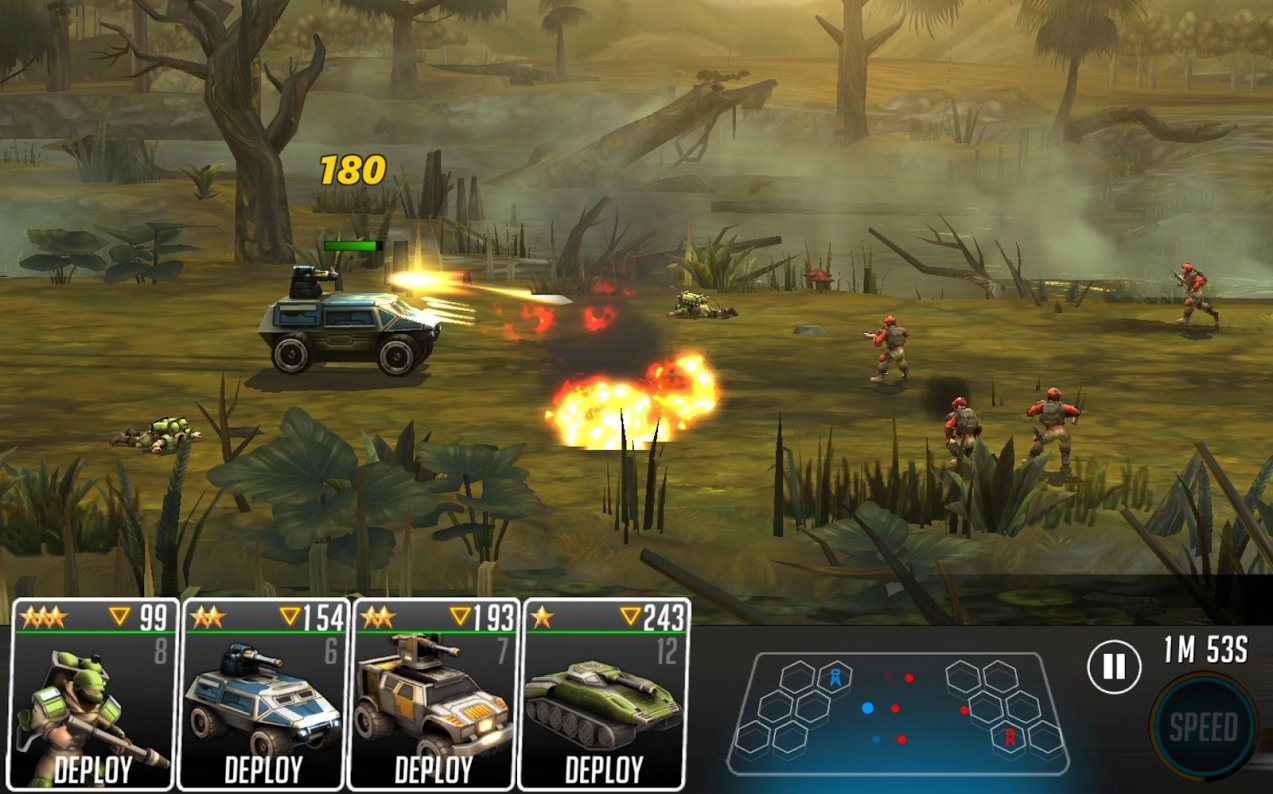 As mentioned, each unit has a specific color type that makes it more powerful against other units. If an enemy is cloaked in red it is stronger against infantry, blue is strongest against tanks, and green is strongest against recon vehicles. But any type of unit can be any color, so there is no pattern to follow beyond the one I just listed, which makes little logical sense. I found this color scheme to be frustratingly obtuse.

For a game that borrows so much from other mobile strategy games, one element that is lacking is a sensible color-coordination system. 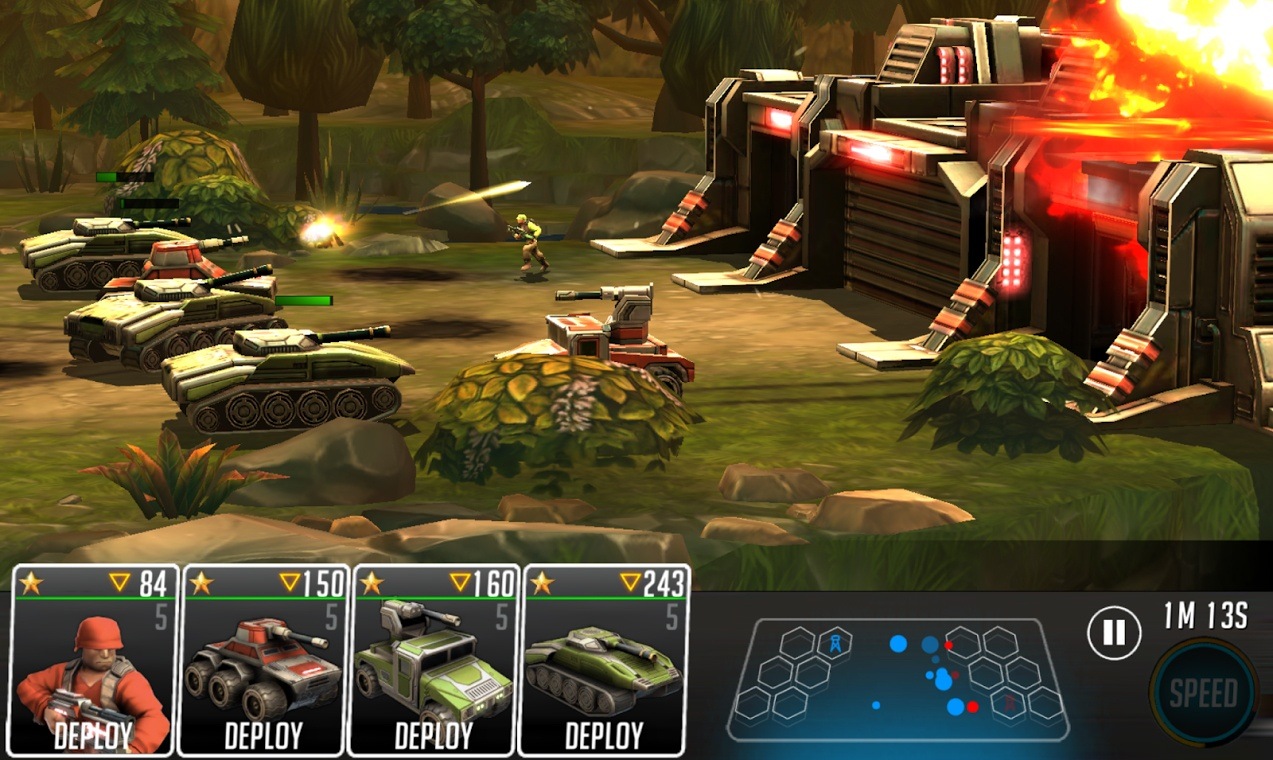 I don’t at all understand the need for the color system to begin, with because I already had the three unit types that would have made the perfect rock-paper-scissors combination.

Instead of being able to quickly counter a blue infantry unit deployed against me, I had to glance down at my notes to see that blue counters tanks, so I shouldn’t deploy a tank and instead I should deploy a red unit because red counters infantry. So I deployed my red recon vehicle to deal with the blue infantry unit. By the time I looked up I’d see that the enemy deployed a green tank, and it was back down to my notes I went. I hardly was able to enjoy the game playing it this way, and was getting tired of it very quickly.

And then I met my savior.

My savior came in the form of a three-star yellow (the game failed to explain to me what yellow does) recon vehicle named Ariel that I unlocked after completing a certain amount of missions. 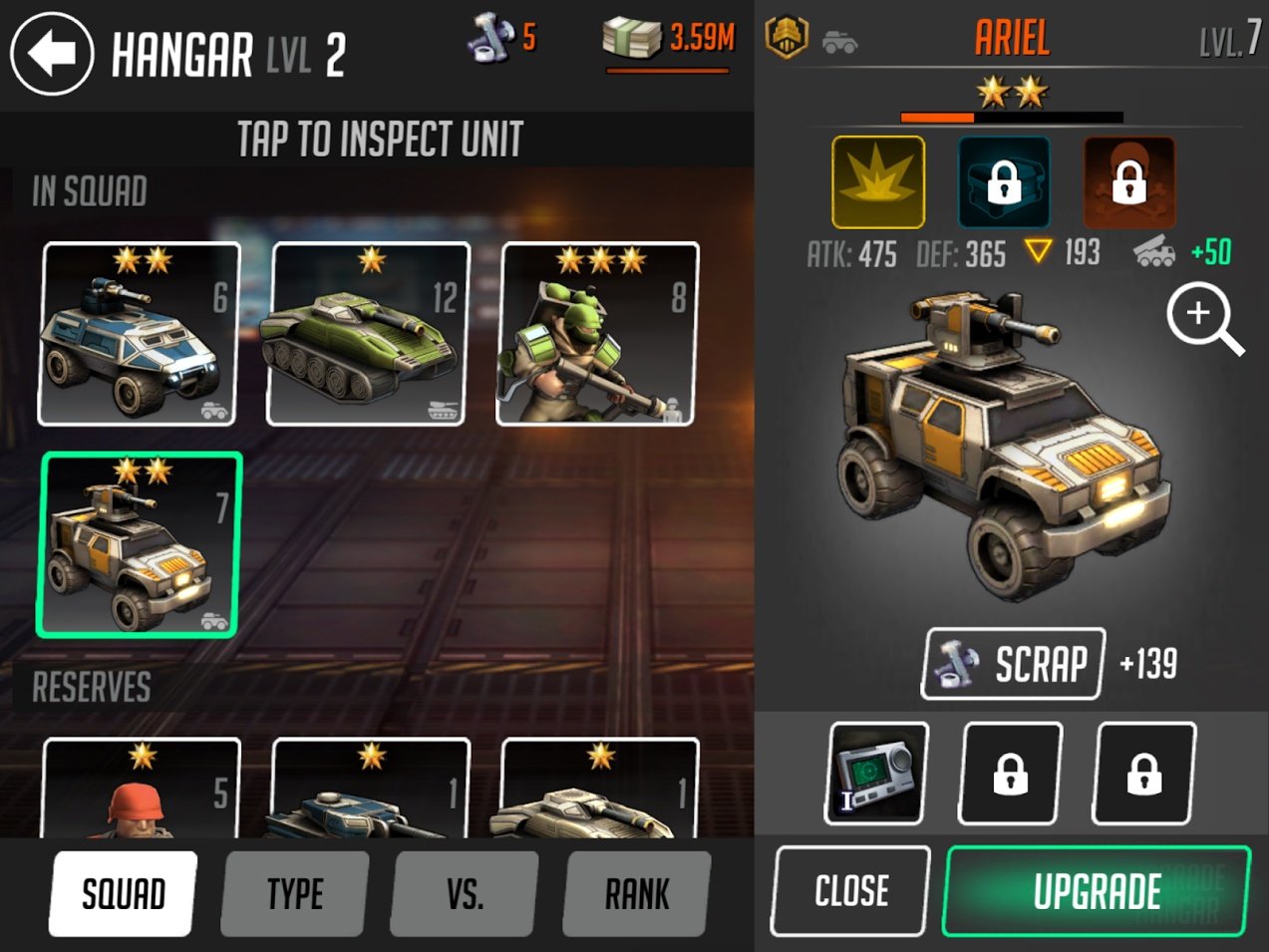 Ariel was a beast and could decimate anything the enemy team threw at me. She cost more than a usual recon vehicle so I had to wait a little longer to deploy her for the first time, but when I finally did the game was basically over. I scrapped my lesser vehicles in an effort to upgrade and improve Ariel with their salvaged scraps.

Suddenly the game went from being too frustrating to being too easy almost instantly.

I’m sure Ariel isn’t a common unit to unlock, though I did unlock a 3-star unit eventually, but for some reason Ariel was stronger than it was. It didn’t matter anyway because I was going through my energy faster than the game could refill it, thanks to Ariel.

League of War: Mercenaries could have been a great game of strategy built around deploying friendly units to counter those that the enemy deployed, but due to an overly complicated system and (in my case) and overly powerful unit, that experience was bland at best. Other games pull off the same sort of strategic element flawlessly — and some don’t even ask you to deal with city-management mechanics to get to the real meat of the game.