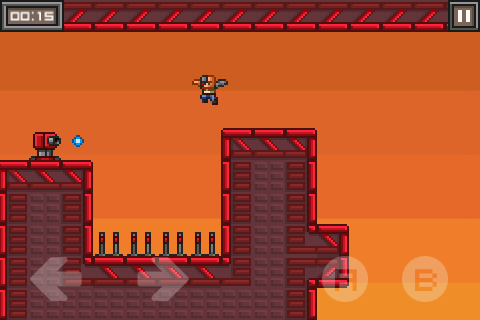 Evil scientists are never people you want to mess around with, but when they get together to form a league intent on developing a weapon of mass destruction? Sometimes you’ve just got to step in. League of Evil places you in the nimble shoes of a secret agent, as you battle your way through level after level of platforming mayhem to thwart their evil plans once and for all!

League of Evil offers 54 levels of increasingly difficult platforming action that should appeal exclusively to the hardcore gamer in all of us.

Things start out simple enough. At first, you’ll just need to wall climb and double-jump your way past electrified obstacles as you make your way towards the evil scientist that’s just waiting to receive your death blow. Then an armed guard gets added in… then a moving platform… then a swinging hammer and a turret… Pretty soon you’ll be trying to navigate a hellish nightmare with death waiting around every corner. To say League of Evil is a difficult game would be a gross understatement.

The high level of challenge is a big part of what makes League of Evil so appealing. It’s not the sort of game that will appeal to everybody; only the tough-as-nails type of gamer that remembers the brutally difficult platformers of days gone by. Gamers with fond memories of the one-hit deaths in Contra or the platforming challenges of Mega Man will absolutely revel in what League of Evil has to offer.

There really isn’t a bad thing to say about League of Evil, save for its enormous difficulty. And even as hard as it is, no single level feels impossible. Through trial, error, and repeated attempts, every level can be conquered. And if you’re looking for even more challenge, you can try to collect hidden suitcases to unlock achievements or replay a level to improve your time and unlock a higher star rating.

With 54 stages included in the app and the possibility of more to come, League of Evil offers a tremendous amount of value for its paltry 99 cent price of admission. The difficulty means this one won’t be for everybody, but if you’re a gamer looking for a challenge, expect this one to keep you busy for quite some time.