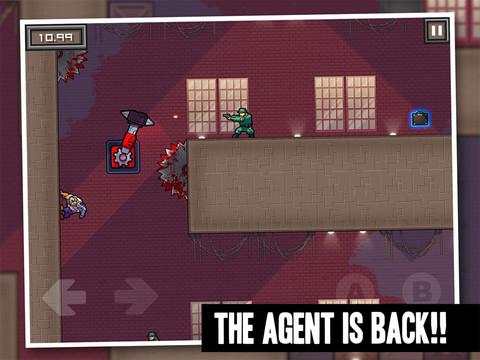 Just because you work in a high-tech laboratory and wear a prestigious lab coat, that doesn’t make you any smarter than me. The League of Evil series has become well known around the App Store for its challenging, instant-death platforming gameplay, and for giving the world’s smarty-pants scientists exactly what they had coming. But how does League of Evil 3 stand up against the same scientific bloodbaths we’ve already been enjoying for the last several years?

League of Evil 3 continues on with the huge upgrade in graphics that was first introduced in League of Evil 2, with slick and polished visuals (as opposed to a more pixelated look), and gameplay animations that are wonderfully fast-paced and smooth. The goal of the game remains the same: reach the end of each blistering platforming stage as fast as you can, and then punch an unarmed scientist so hard in the face that his body literally explodes. Because who cares that much about scientific research anyway?

Now let’s get one thing straight: I like to think I’m a pretty seasoned player when it comes to tough-as-nails platformers. I grew up playing the original Mega Man games on the NES, and currently boast a proud 100% game file in Super Meat Boy. So believe me when I say that League of Evil 3 is an extremely difficult game, which not only walks the line of frustration, but bounds over it entirely at regular intervals. After playing the game all weekend, I barely made it into the second level set by the time of this review (and any tips on level 1-15 are still more than welcome, please).

All in all, League of Evil 3 boasts an impressive 80 levels, which are spread across four different level sets with varying themes. Now 80 levels might already seem like a lot to begin with, but given the amount of time you’ll spend trying to 3-star every level and make it out alive with the hidden briefcase collectable in each one, don’t be surprised to find your overall game time skyrocket before you know it. And of course, this is all without even mentioning the bonus five “Impossible Missions,” which after seeing a bit of them in action, look to be a strict lesson in trying not to make your own head explode.

For the most part, the controls in League of Evil 3 are fairly precise, with two virtual arrows to move left and right, an A button to punch, and a B button to jump. However, the A and B buttons are placed oddly far apart: so much so, that when playing on an iPad, you’ll actually have to stretch your thumb to make a fast punch immediately after a jump. Luckily, you’ll only need to worry about punching every now and then, like at the end of each level or when the occasional enemy soldier is on patrol, so it doesn’t become too much of an issue, but it’s still there all the same. There was also more than a few times where I could have sworn I’d hit the left arrow, only to have my character run to the right instead, and into a whirling saw blade.

But sadly, there still comes a point when you realize that League of Evil 3 rarely does anything new that we haven’t already seen before in the previous two titles. Aside from the changes in scenery, new character costumes, and maybe a little bit more blood and guts when you make those scientists explode, all of the obstacles and hazards are pretty much identical from the last game, and you might have a hard time matching a video or image still from a random level with its corresponding game. 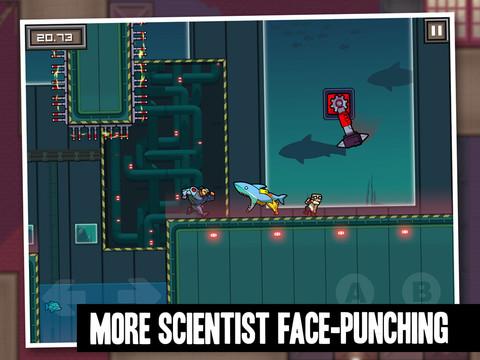 In the end, League of Evil 3 is still an incredibly solid game, and the series as a whole remains one of the very few quality platformers available on the App Store today. If you liked the first two League of Evil games, then be prepared to get your thumbs back up to speed, because this third installment offers much more of the same. But if you’re looking for a drastically different experience, or if the idea of killing scientist after scientist has grown a bit stale, then you may want to hold off on this one and find some new kind of evil that might be lurking elsewhere.