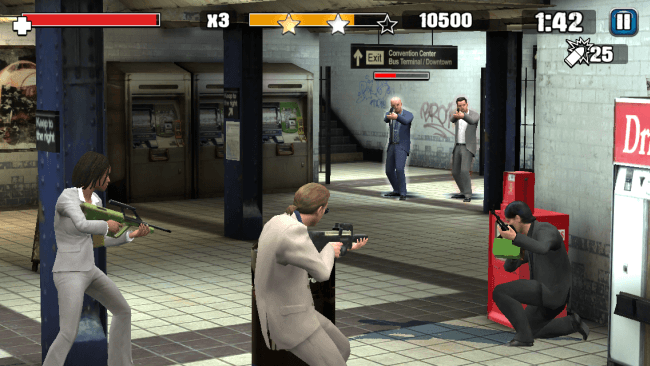 Two tickets to the Gun Show

Mix one part Virtua Cop with a scoop of collectible card game and you have Lawless: a freemium action game that’s all about relatively precise shooting and collecting lots and lots of guns. It makes for a surprisingly entertaining bite-sized arcade shooter, actually – although regrettably, some of the typical Mobage gouging does come into play.

The majority of your time spent playing Lawless will involve tapping the screen to shoot people. It’s a rather basic idea, certainly, but there are other elements thrown into the mix to keep things from getting stale. Enemies move around, duck behind cover, and attack with their own firearms or even grenades (which must be shot out of the air to avoid damage). People you don’t want to shoot, like civilians, run all over the map because logically the best place to go during a gunfight is right between the two shooters. Sometimes you’ll be asked to maintain a certain accuracy percentage to earn a reward bonus. Other times you’ll be required to use a specific category of weapon. 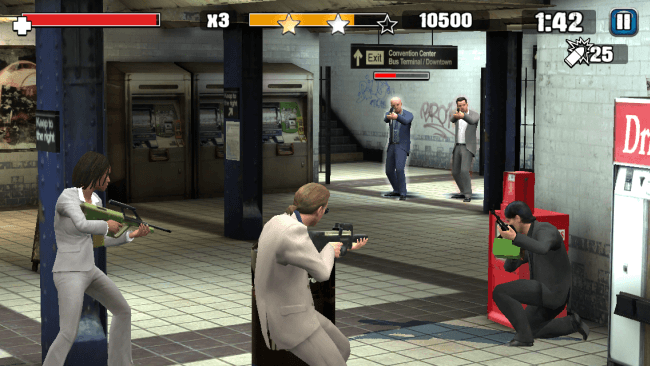 In between firefights you’ll be able to upgrade the guns you’ve earned, buy new ones, or sell off the extras. This is where Lawless‘ card-collecting elements come into play, as each gun is essentially like most cards used in similar Mobage titles. They have rarity, you can pour money into improving their stats, and even upgrade them into more powerful (i.e. higher rank and rarity) versions given enough time and cash. A similar system is used to improve characters, although they can only be leveled-up through completing levels. Still, once they hit their maximum, you can spend gold (a special upgrade-only currency earned by achieving 1-3 stars in each stage) to have them Rank Up and start the leveling process (they keep their stats, but can improve even more now) all over again.

Lawless ticks almost all of the boxes required for a mindlessly fun arcade game. The controls are simple, progression is relatively quick, levels can be replayed as often as you’d like for extra cash and experience, and the amount of time spent playing a stage rarely exceeds a minute or two. It’s great for quick bursts of play. There’s also the allure of possibly nabbing rare guns; either by chance through a boss fight, or by other chance through a random draw after completing a level. As expected it mostly results in doubles, but whatever you don’t need can be sold for a rather tidy profit. And when you finally do get a really awesome gun it gets even harder to stop. 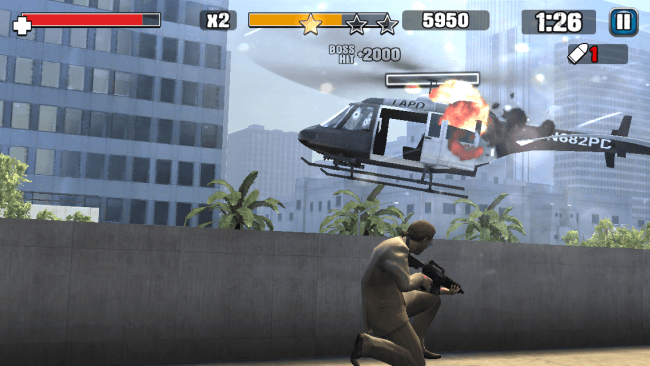 I also really appreciate how it doesn’t beat you over the head with wait timers. The only significant one is tied to extra lives: players have a bank of 3, and if they lose one it takes 20 minutes to come back. The thing is, when it’s so easy to jump back into earlier levels for some extra cash and experience it ends up being a non-issue. If I hit a tough spot I can just replay the 30+ previous missions for loot and such until I’m ready to try again. This can get a bit repetitive of course, as can the levels repeating later on, but ultimately it’s not a big deal.

Lawless does have a bit of a problem with price-gouging, however. There are some truly impressive firearms to be had, but all of them require special coins to purchase. And these coins can only be bought with real money. They can’t be earned in-game or by any other means. If you want that ridiculously powerful shotgun, you’re going to have to pay for it out of pocket. It wouldn’t be so bad except for the fact that the game constantly reminds you of these weapons. “Here, rent this rifle. See how great it is? Now you can buy it for $3. No? Guess it’s back to your middling assault rifle then!” It wears on the nerves. As does the unresponsive reload button and the often poorly-placed special action button (toss grenades, heal allies, etc.) that often ends up with an enemy hiding behind it. 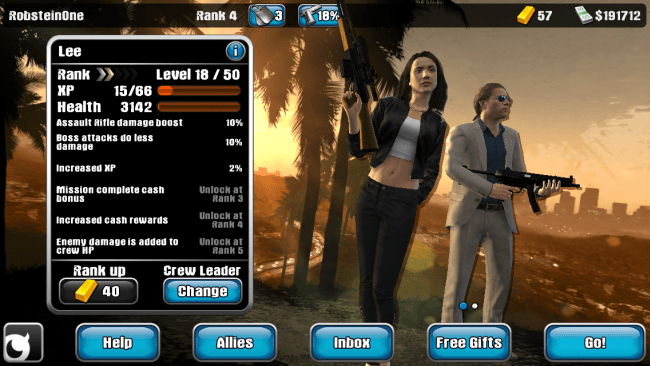 Despite the interface annoyances and rather tacky monetization, Lawless still makes for a shockingly good time – especially for arcade shooter fans. It can get a tad repetitive at times, but it’s easy enough to switch to playing something else for a little while.