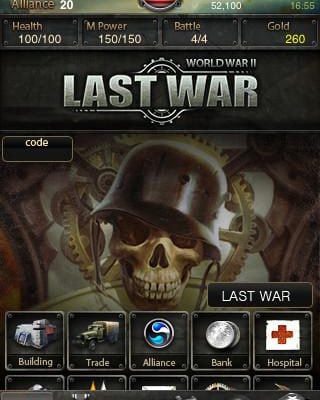 For the love of all things holy, let’s hope Last War is Gamevil’s last attempt at freemium

They say the dogs of war never sleep, but some dogs are best left lying. Gamevil takes a stab at freemium gaming on iOS, but playing through Last War is like fighting a losing battle.

Last War is a strategy game in the vein of the original Mafia Wars for Facebook, offering a presentation that is all too familiar to social gamers. Rather than navigate environments in real-time, you’ll simply be sifting through menus and tapping a tab that says “Do It” over and over. Though there’s a sort of symmetry to the gameplay that glows like a soft bulb, Last War is neither fun nor engaging.

The game is loosely set in World War II, and at the outset you’ll choose to represent either one of the allied or axis powers. Last War sets its tone with a busty blonde who will walk you through a meager selection of basic functions, but there’s far too much left unexplained. However, with the exception of managing resources, Last War will have you doing little more than repeatedly tapping on a single icon in order to complete missions. A single, crusty battle animation is all you’ll get in terms of action.

One of Last War‘s biggest issues is that the various components of the game feel far too convoluted for what is, at its core, an extremely pedestrian affair. You’ll need what’s called M. Power and income in order to execute just a single portion of a mission, but first you’ll be required to purchase said mission with silver. The balance of progression quickly runs off the rails, and you’ll be required to continuously level up your supply depot in order to keep up with demands on income.

The other main problem is the game lacks any real sense of purpose. The social elements are barebones, and without any story, action, or lure to keep tapping the same button continuously, Last War fast becomes a game you want to forget about. 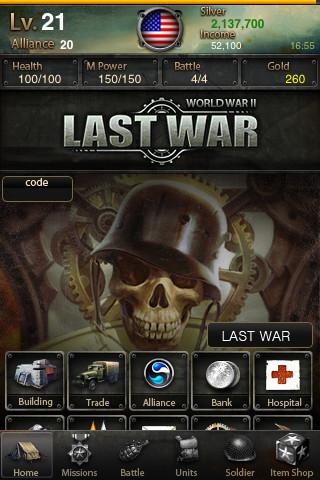 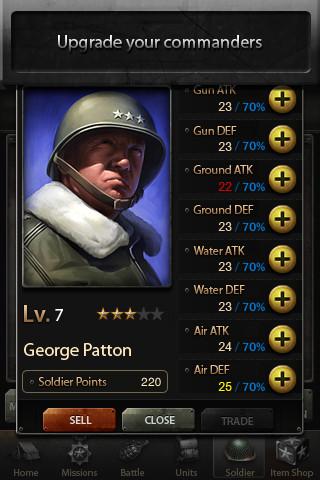 It doesn’t help that the presentation is drab and generic. World War II is a chapter in time to be remembered solemnly and celebrated with pride. Here, it exhibits all the personality of a convenience-store hotdog that’s been rotating under a heat lamp for far too long. The visuals are lackluster, the sound effects almost nonexistent, and the Engrish isn’t amusing or endearing.

With its paltry presentation and discombobulated gameplay, Last War not only fails to deliver an entertaining strategy adventure, it suggests that Gamevil may be having a bit of an identity crisis. After enjoying the publisher’s many successes on iOS, Last War seems like a dire turn in the wrong direction. Not only are in-app purchases completely out of the question, this is simply a game you shouldn’t waste memory space on.