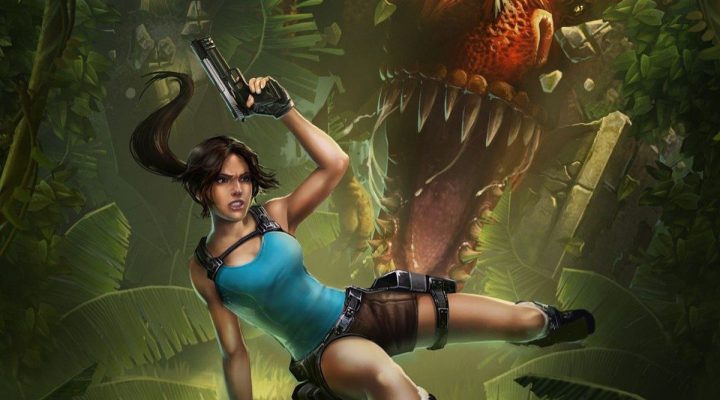 With lush jungles, rich architectural ruins and a beloved heroine, Lara Croft: Relic Run from Square Enix is a relentless, exhilarating experience… once you figure out how to get more than a hundred yards without dying.

The gameplay is quite simple: run through the environment on three tracks, avoid obstacles by swiping, collect relic pieces, and occasionally shoot baddies by tapping. But the combination of disorienting cut scenes, a wildly swinging camera, an ever-changing course, an occasional swipe-response lag and the unrelenting speed of obstacles made progressing much more difficult than I was anticipating.

In short, I really sucked at it. 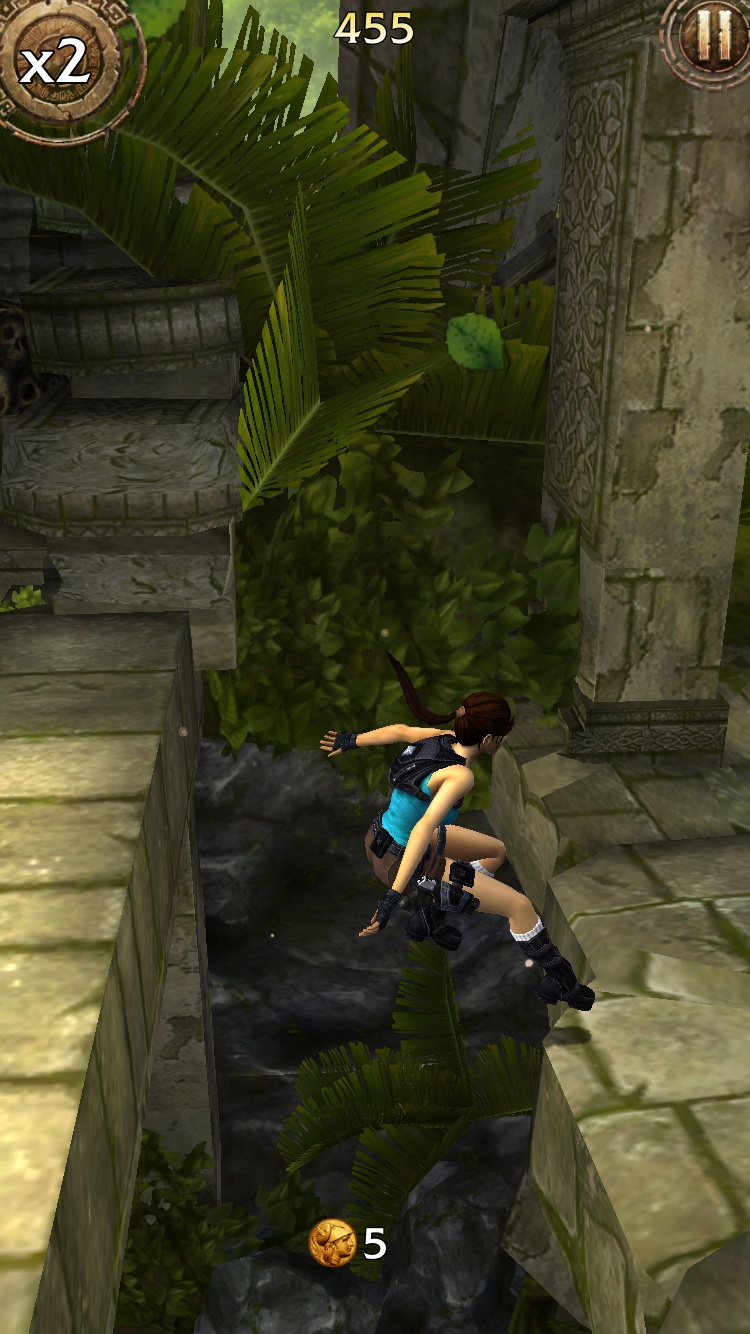 I must confess that I prefer side-scrolling endless runners to behind-the-back runners, because I have a hard time orienting and coordinating myself that quickly. As such, the learning curve for me in this free-to-play game was likely exponentially higher than for a fan of Temple Run or its game brethren.

Determined not to give up, I took full advantage of Relic Run’s unlimited replays. If there had been any friction to try again, I would likely have given up on this game. But the quick respawn time and the lack of energy system made trying again painless- until, of course, I ran into my next collapsed column or fell from a broken bridge. Early on, the beautifully rendered parkour cut scenes were the only smooth moves I was able to really enjoy. 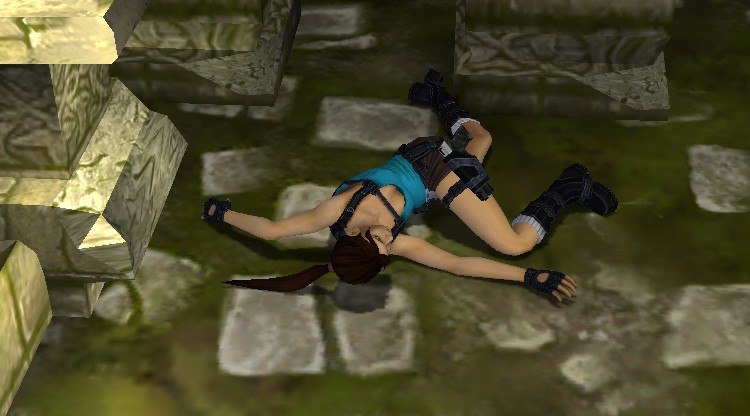 One benefit of being awful at the game was I got to experience (over and over again) the incredible ragdoll physics; the game is worth trying just for that. The run is different each time you restart, so you really have to rely on your reflexes instead of memory. Because I noticed an occasional lag in responsiveness, my timing had to be perfectly precise to make any significant progress.

With practice I was able to get far enough to be invested- the kind of investment that gives you a real thrill the further you get. This was about the time I made it onto my ATV and I truly felt like I was a badass. No more lame stumbling into rock piles! Now I was flying through the air, past waterfalls into the jungle, and ferociously blazing through ancient trails. 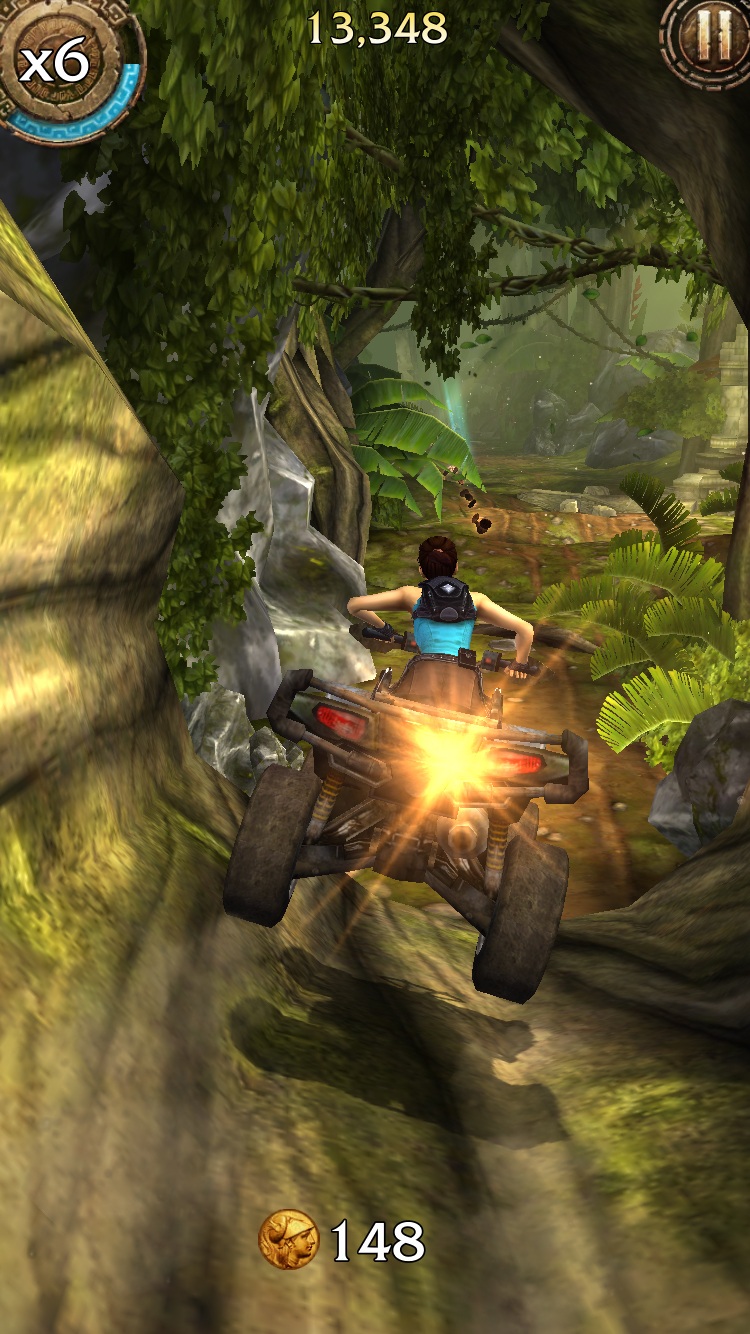 The pacing is exhilarating and the graphics are gorgeous. The scenery’s polygonal edges are noticeable once you crash and die, but if you’re playing well you will barely notice them. The parkour cut scenes are impressive and invigorating to watch, though they may interrupt your flow if you have coordination challenges, like myself.

When I finally died after collecting some relics and taking down some hordes of bipedal lizard enemies, I was faced with the decision to revive Lara using the “Resurrection Ankh.” If I didn’t revive her, I’d have to start over from the beginning (again) and that was when I truly started to see the value of the in-app purchases. Gems are the hard currency that get you Ankhs and clothing. With the gold coins you earn easily through gameplay, you can purchase consumables, upgrades, power-ups and weapons. 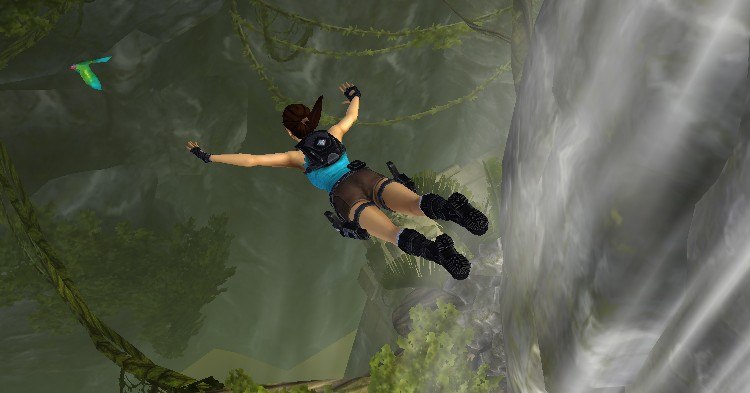 I was impressed by the reasonably fair economy that offered most items for coins even though I needed Ankhs if I were ever going to make it to that rad Tyrannosaurus Rex the splash screen promised.

Overall, the game is worth the free download and at least a trial run, if you will. Whether you’re great at endless runners or can barely stay on your feet, Lara Croft: Relic Run offers lush visuals, entertaining effects, and a thrilling pace that will certainly get you going.