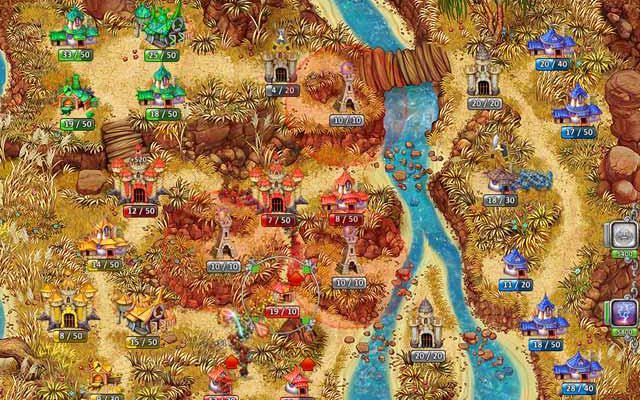 LandGrabbers is a sort of a Risk-like area control game that’s inspired by real time strategy and even a little bit of tower defense, though you neither build towers or control units directly. You’ll be in charge of an army tasked with taking over all the control points of each map, marked with buildings. Your job is to swarm and take over each of these unoccupied or enemy buildings using your units.

Each map is a series of buildings that could be a little hamlet or village. Some are controlled by you, some by various enemies, and other are unoccupied. The round plays out with the various factions charging and capturing the various points around the map. There’s a back and forth and points are won and lost until a someone takes over everything and wins. 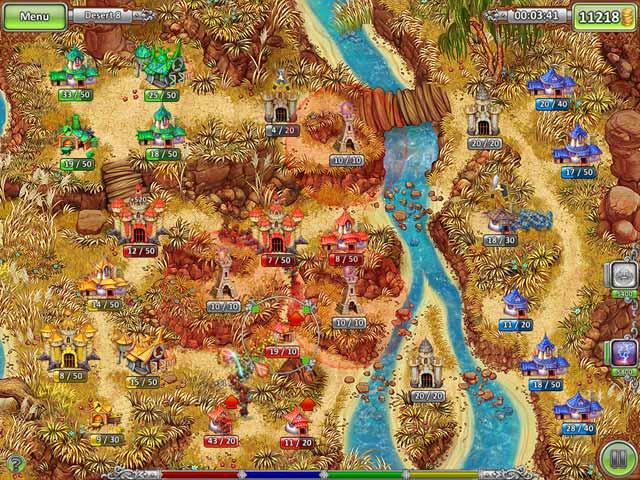 To attempt a take over a enemy or neutral territory in LandGrabbers you simply click the building you want to use then the building you want to attack. Half of your available troops come running out of your base and charge their intended target. If you outnumber the target building, you take it over and it starts generating units for you. If need be you can select multiple buildings to swarm the enemy, though you need to be sure you don’t send to many units, as the excess tend to just be wasted.

Your controlled buildings constantly generate new units, and can by upgraded to hold more by temporarily sacrificing half your units. So it’s a simple numbers game. If a building has 20 units in it, using it to attack will give you 10 units to work with. Need to take over a building with 25 enemy units in it? Then click on 3 buildings to attack with and outnumber your enemy.

In addition to the standard offensive buildings that you can upgrade to hold more units, you also have access to defensive structures like watchtowers which don’t generate units, but will pepper the enemies with gunfire. It’s not a tower defense game though, you don’t build these buildings, you can only take them over. Control may switch back and forth over the course of a game, but they never get destroyed.

It’s what I would call “casual strategy” as there is definitely some strategy going on here but unlike the hardcore Real Time Strategy games you’re not managing resources or unit production. The units replenish themselves and there’s no resources to collect, so you only need concern yourself with when to invade different points on the map and with how many units. 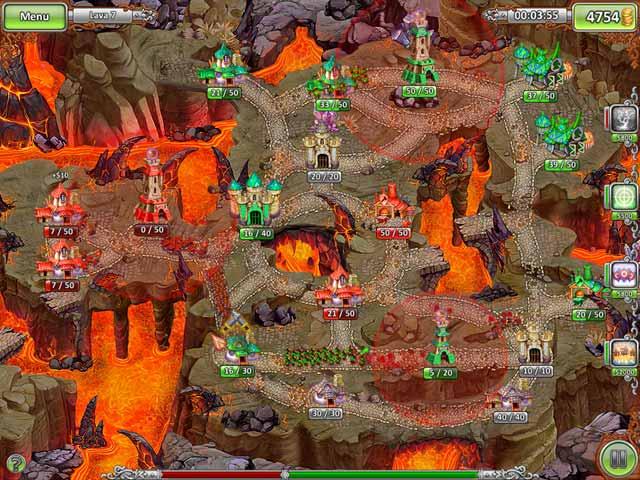 If I had one complaint about the game it’s that a game like this is screaming for online play against live opponents. Sure, the AI is competent and provides a good strategy, but this would be great if I were able to play against people online somehow. Because while the computer is good, there’s just no compelling reason to play though a level more than once, which means once you’re done the game there’s no reason to fire it up again.

I was surprised at how much I enjoyed my time with LandGrabbers, to be totally honest. When I first booted it up I figured it was going to be too simple, too casual for me to enjoy. But that casual aspect is exactly why I think I liked it so much. Letting you concentrate on the one thing, moving units around, offers a game where I can just click around and have fun. Sometimes you just want to hit that zen feeling of not having to dance all over your keyboard to play a game, and that’s when a game like LandGrabbers fits the bill.