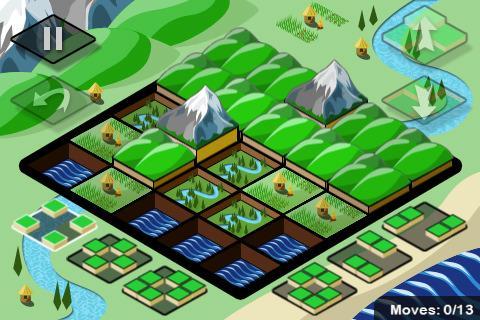 The premise of Landformer is incredibly basic. Use a set of limited tools to either lower or raise the landscape to get all the land back to a flat position. It reminded me of the God game Populous or SimCity’s terraforming aspects. While in that game flattening the land was just the beginning (since you then needed to build on it), here making the land flat is its own reward… and the only goal you’ll be chasing.

It needs to be said up front that while the premise is basic, the gameplay shines for the complexity it offers. Limiting the player to six basic patterns covering a 3X3 portion of this 5X5 grid lets the game start off easy but escalate in difficulty pretty quickly. But I’m getting ahead of myself, let’s talk about how this all works.

Landformer is at its heart a puzzle game where the goal is to both raise and lower portions of the landscape to get everything back to perfectly flat. Raising them above that leads to hills and up again gives you mountains, lowing it gives you rivers and then oceans. It depends on how far away from center you are.

So you choose different patterns to place over the landscape and can then raise or lower the landscape to your heart’s content. You change between the patterns to get all the necessary tiles up and down enough to all be perfectly flat. Do this in the number of moves dictated and you beat the level and move on. Early in the game solutions are easy to see, but that really only lasts for the first 10 levels.

Landformer is a freemium game, and sadly only includes those 10 easy levels for free. It’s unfortunate because those levels are SO easy that I think it might turn some people away, there’s just no challenge there. But for $1.99 you get access to 50 more levels and those get incredibly hard. There’s an intense sense of satisfaction when you beat a difficult puzzle. There are no timers, just the maximum amount of moves allowed, so the game rewards patience and thinking ahead at your own pace.

The look of the game is cartoonish but fits perfectly for the tile layout that exists. There’s an optional “Disco” theme you can buy but it much too abstract for my tastes. I like seeing rivers and mountains, as it gives me a good hook into what I’m trying to accomplish. Also, I found it easier to associate needing to lower the landscape when seeing a hill, and not just a color. 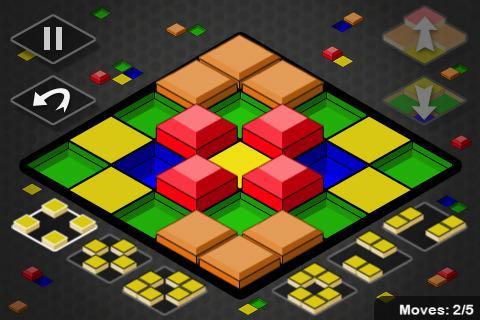 There’s a level creator built in and even a feature built in to share your creations with friends. Sadly at the moment the only way to share those files is over email, where an URL is sent to download the level. So if you don’t have email set up for your device, there’s no way to do it. Personally with an iPod touch I’d like to see some different options to share. However, this is a small stumble in an otherwise fantastic game.

With only 10 levels included you barely get a taste of what Landformer really has to offer, and if you want to really see it in full bloom you have got to spring for the extra levels. I think they really should have included a few hard levels in the free version to really get puzzle fiends jonesing for their fix. Those that pony up for the 50 extra levels will not be disappointed. Landformer accomplishes exactly what it sets out to do, and I think I’ll be carrying it around on my device for quite some time.