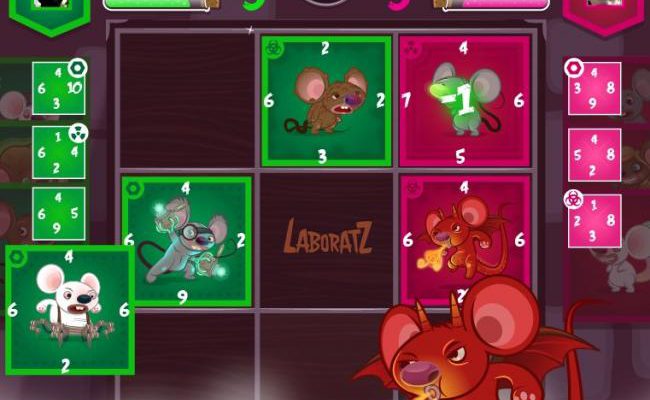 Not bad, but not Gouda either.

On my list of “most wanted, never gonna happen” games, a standalone, licensed version of Triple Triad is right at the top.  The brilliance of this card-battling mini-game from Squaresoft’s 1999 Final Fantasy VIII is the one thing fans and non-fans can agree on when not trading blows over the Junction system.  While Square Enix refuses to take our money and create this instant bestseller, other developers are tweaking the idea of Triple Triad and attempting to cash in—sometimes literally, as is the case with Laboratz.

The basic gameplay behind Laboratz and Triple Triad features multiplayer card battles on a 3×3 grid.  Opponents have five active cards within their deck during a battle, with a numerical value assigned to each card’s four face sides.  Players take turns laying single cards on the grid; any card that is played adjacent to a lower numerical value will capture the existing lower value card.  The player with the most cards under their control when the grid is full wins the battle. 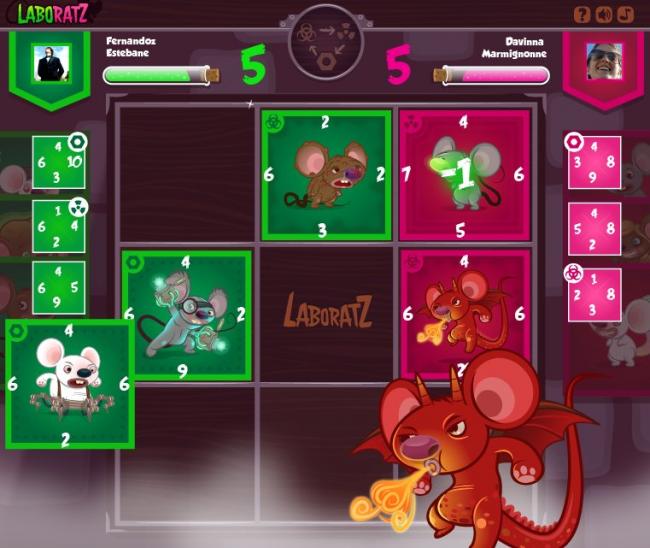 Laboratz wraps its Triple Triad-inspired gameplay in a theme all its own.  You are a new enrollee at Labanoir High School, where students spend most of their time experimenting on and then battling their mutated pet rats.  Each rat is featured on a card with its elemental attribute and four numerical strengths used in battle, while its rarity and personal bio can be viewed from the Lab menu.  The rats vary greatly in appearance, from the light saber-wielding “Ranakin” to the radioactive and glowing “Transparat.”  Although these “personalities” have little bearing on the rat’s performance in battle, they are charming and naturally encourage having favorites (mine is the bulbously-inflated “Heliumax”).

But that Lab menu is not just for admiring your pets; unlike its inspiration, each card in Laboratz can be upgraded for increased power and eventually evolved into a stronger type of rat.  This is done by feeding them a specific number of pills and waiting for the upgrade process to complete.  Low-level rats require only 60 pills and five minutes to upgrade, but evolutions take 300 pills and a full hour before they are ready. Luckily, even while a rat is upgrading he can be included in your deck and used in battle, just in pre-upgraded form.

Those battles are strictly multiplayer-only and can be accessed in two ways. Quick Duel pits you against a random player, or you can specifically challenge anyone online that you have saved to your “buddies” list.  Both methods result in the same battle rules. Five cards are chosen at random from each player’s nine-card active deck (you can have more rats in your Lab, but only nine active).  Players take turns—the first turn is chosen at random—placing their cards on the 3×3 grid.  Opponents can see each other’s cards in full throughout the battle, including strength and element.  If an elemental card is played next to an element it’s strong against—mechanical beats mutant, mutant beats radioactive, and radioactive beats mechanical—then the weaker card will lose one point of strength on every side.  The player with the most cards captured once nine cards have been played is the winner; both players receive pills and weekly points, while the winner earns ranking points (and the loser loses some). 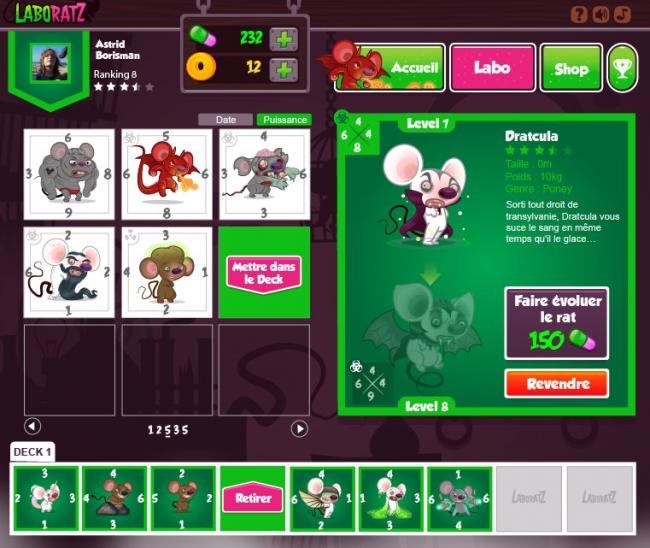 Weekly points are used to score in the weekly participation tournament and earn prizes, while ranking points increase your player grade.  Besides being a general indication of how experienced a player is, grade also unlocks “dirty tricks”—items that can be used in battle for an advantage—such as the “super cheese” that adds one point to every side of a selected rat’s card, or the “tazer” that stuns an opposing rat so he cannot be played for one turn.  Dirty tricks cost pills to use in battle, but they can often turn a losing fight around in one blow.

All of this may seem complicated when written out, but in practice it makes for a very straightforward, simple game.  Part of Triple Triad‘s appeal (and, at times, frustration) was its staggering number of rules and twists that affected the strategy required.  From combo flips turning over non-adjacent cards, to the potential to physically win any of the cards you capture, many details had to be accounted for.  Every round of Laboratz plays like one of the simplest rounds of Triple Triad, with only the Elemental rule and dirty tricks adding any additional strategy.

The result is most battles being determined by the strength of players’ rats and not their ability to plan ahead or strategize.  This wouldn’t be an egregious error if not for two other problems: first, the matchmaking system seems to be entirely random.  In my first handful of battles as a grade one, I was matched up against other grade ones, a grade 11, and a grade 33.  I had no chance against these latter two, who had at least dozens of rat upgrades behind them and access to dirty tricks I hadn’t even unlocked.

Second, new rats are extremely hard to come by, unless you purchase them with real money.  The game awards you one new rat card for completing a number of missions—the number increases as you complete them—that include tasks like “Win 10 Quick Duels” or “Upgrade 5 rats.”  Over multiple days of playing and aiming for missions, I earned only two new rat cards; the rest of my deck is made up of beginner cards I’m slowly upgrading with pills.  Players who are dissatisfied with this process and have coins—the in-game, real cash currency—can buy their way out of missions, or simply buy packs of rare and powerful rat cards.  Considering that the low-strategy battles favor strong rats above all else, a player can literally purchase their way to advantage and victory. 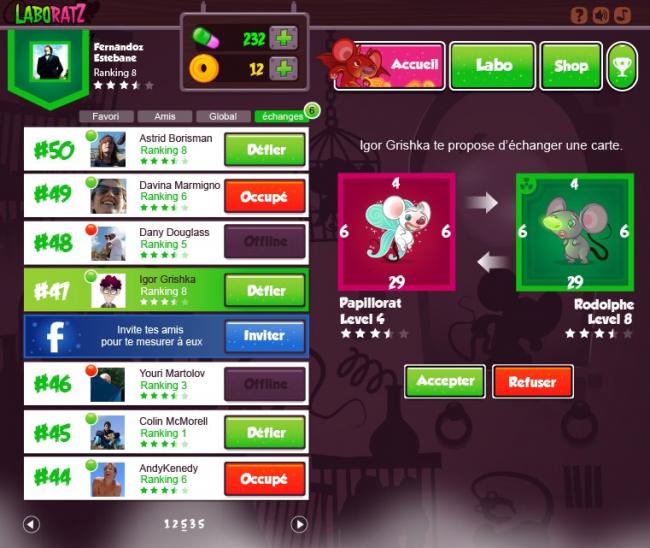 These issues might be less pronounced if different game types or rules were available, or even an option to play the AI instead of human opponents with money.  The rewards for winning could also be weighted more favorably towards beginners: as it stands, the number of pills and grade points earned are based on how well you win, not who you are playing against.  That means that capturing all nine cards will earn you a significant bonus as opposed to only capturing six, but with no consideration to whether you were playing a grade one or a grade 31.

Laboratz is a reasonable quick-fix for a Triple Triad itch, with cute characters and extremely easy matches to jump into.  Unfortunately, it suffers heavily from lack of gameplay variety, unbalanced matchmaking, and overly preferential treatment for paying users.  A lack of polish on top of this—the help menu in French, an inability to back out of choices or forfeit games—reiterate that this is not the card-battling game we’ve been hoping for; the wait begins again.