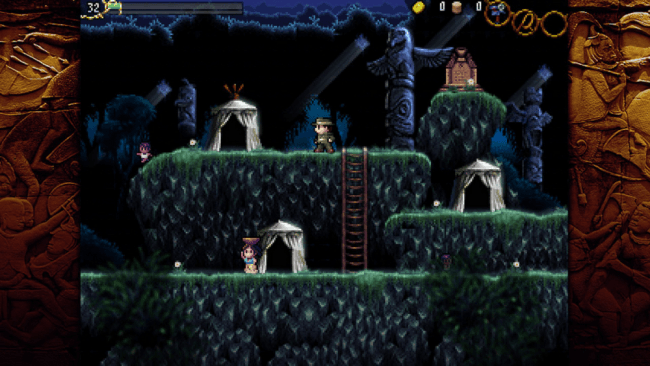 And you thought nails were tough

As I write this review, my mind is clouded with the shame of defeat. Despite several attempts on my behalf — and a metric ton of patience — I couldn’t beat La-Mulana. Some would take this as a sign to give up and move on to the next game, whereas others would grit their teeth and give it yet another shot. I happen to fall into the latter camp, but if you don’t, you may want to get your gaming fix elsewhere.

La-Mulana is a 2D puzzle-platformer about an archaeologist named Lemeza, who decides to embark on a dangerous journey through the La-Mulana ruins. His quest is a long and tumultuous one; his path often impeded by obtuse puzzles and roving enemies. Staying alive isn’t too difficult, but figuring out where exactly you’re supposed to go – as well as how to solve the game’s many difficult puzzles – is extremely challenging.

As if that weren’t enough, the game also provides you with very few opportunities to save, and it isn’t uncommon to lose between 20-30 minutes of progress when you die. Granted, that isn’t a ton of time, but it could be a harsh pill to swallow for those who don’t play a lot of retro games. The only thing harsher, really, is the scarcity of items like ammo for sub weapons and health. In fact, if it weren’t for your trusty Castlevania-esque whip, you’d be pretty much doomed from the get-go. Thanks, whip!

And did I mention the backtracking? Unless you’re an incredible player and somehow make it from start to finish with no trouble, chances are good you’ll be walking through some areas more than once. Thems the breaks, I’m afraid.

If all that sounds like shoddy game design, I assure you it isn’t. The developers went into the game with every intention of making a tough-as-nails puzzle-platformer, and that’s exactly what they ended up with. Despite being a part of a genre most of us are very familiar with, it’s about as polarizing as a game can get. This is all just a longwinded way of saying that La-Mulana hates you, and cares not if you throw your controller or keyboard at the wall in anger.

And yet, La-Mulana is an incredibly charming game. Nearly every conversation between Lemeza and other characters had me smiling, as did the notes left behind by those who died in the ruins. My favorite piece of writing, however, comes in the form of emails sent to you by the elder of a nearby village. He has a tendency to contact you when you encounter something new or potentially confusing, and despite the importance of these emails, there’s usually a little humor baked in. In fact, it’s those very emails that kept me from giving up on the game when I was at my most frustrated. Laughter really is the best medicine!

La-Mulana feels like an over-the-top response to the handholding and lowered difficulty of games in the modern era. It’s a tough-love reminder of what gaming was like in the good ol’ days, back when save points were either few and far between or wholly nonexistent. More than that, though, it’s a cleverly crafted experience that’s overflowing with charm, clever puzzle design, and respect for the player’s abilities. If you’ve been looking for an excuse to create a controller-shaped hole in your wall, here it is.