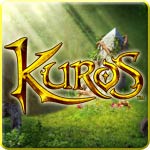 As Katya, you’re in a bit of a high-pressure situation in Kuros. Someone has been tampering with the glyphstones that keep the world in balance, and you’re the only one who can restore them. Unfortunately, you’ve woken up with no idea of who you are, where you are, or what you’re supposed to be doing. Hope you’re a fast learner, or it’s the end of everything.

Kuros bills itself as a hidden object game, but that’s a bit misleading. You will have to scour locations for items, but they’re the tools you’ll need to solve the game’s many puzzles, so it’s more like a classic adventure game.

The most important items you need to find are map pieces; you can’t proceed to a new location until you track down all ten bits of the map that will lead you there. You can also find chromatic lenses that will reveal hidden items in a location, but even more valuably, they’ll tell you when you’ve found everything there is to find in a particular level. Several of Katya’s quests will have her searching multiple locations for a particular set of items, and knowing when to move on is extremely helpful. Scrying orbs will give you a pass on puzzles, but like the chromatic lenses, they’re quite rare – use them wisely.

In her travels to save Kuros, the world where the glyphs are kept, Katya will travel through five elemental lands: wood, fire, water, ice, and metal.  Given that the world’s in danger, you’d think that the guardians of those lands would be eager to help Katya on her quest, but they all want something in exchange for their assistance. You’ll have to find ten seeds scattered throughout the wood land, figure out how to forge an orichalcum rod, restore life to a field of wilted metal lilies, just to name a few.

Some of the tasks are simple fetch quests, but most require some amount of puzzle solving, and this is where Kuros really shines. The puzzles are varied, both in type and in difficulty, colorful and clever. Whether you’re reconnecting pipes, guiding a ball through a maze, or figuring out the correct pattern of crystals, the puzzles of Kuros are never boring or repetitious.

Your final task before leaving a land is restoring its glyphstone. After you clear away the detritus that surrounds it, you’ll have to complete the inscription carved into its face by figuring out the pattern of symbols. This is the one area of Kuros that may frustrate some players. The patterns are logical, but if you can’t tune into the particular sense that they make, this part of the game can be a bit of a roadblock. The glyph puzzles can be solved just with trial and error, but they reset after three wrong guesses, so it’s faster to try and figure it out the proper way.

Kuros has smart puzzles, gorgeous graphics, amusing characters and decent voice acting. It’s a wonderfully entertaining journey and it’s over far, far too quickly. If you’re a puzzle aficionado, or a hidden object pro, you’ll be done in just three hours.  Katya drops some heavy hints about a sequel, which I can only hope come to fruition; it feels like Kuros barely scratches the surface of its potential. You’re given a wand and a scepter, but hardly have to use them at all. There could have been more puzzles in each elemental land, too – it feels as though you’ve just gotten to later levels, like the library, when it’s time for you to go.

Hopefully we’ll have a chance to join forces with Katya again sometime. For now, this delicious appetizer of a game will just have to do.