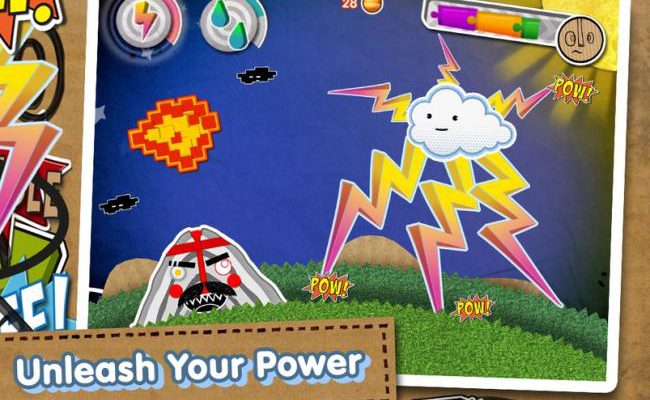 “I like hats. I think it’s nice that the little terrifying clouds are wearing hats now.” – The Planet

From the moment I heard about Chillingo’s newest “rain ’em up,” I knew it was going to be something.  That something was always accompanied by positive expectations: adorable, creative, hilarious, fresh, which have all been met and exceeded.  Unfortunately, these adjectives don’t necessarily describe a good game.  Kumo Lumo, I wanted to love you, and in many ways, I do.  This review is going to hurt me more than it does you.

As the only storm cloud present on an initially desolate planet, our cloud-hero, Lumo, will need to use his rain to help the laid-back and talkative Planet cultivate itself.  Tapping on Lumo to rain on trees will create forests, on rocks will create mountains, on buildings will create cities, and so on.  Lumo has a limited amount of rain, which also acts as his health bar, so he’ll need to collect smaller clouds to replenish his water supply and prevent being evaporated.

Don’t be fooled by the cheerful premise and gorgeous, storybook graphics.  Lumo is a man’s cloud, with a baritone voice and five o’clock shadow, who isn’t afraid to get his wispy tufts dirty.  The land Lumo hovers over is also fraught with danger, as it’s slowly being invaded by pirate foxes, pixelated smog clouds, and mustachioed, headband-wearing volcanoes that need to be washed or zapped away.  The Planet frequently warns Lumo of impending danger with a smile on his face and brazen claim that “We’re all going to die!”

What I love about this game is that the preceding description is 100% true.  Kumo Lumo is an utterly bizarre, often random experience in which nothing is ever really explained, but merely accepted as part of the natural order; it wasn’t until about 20 levels in that the devilish alien creatures were identified as “pirate foxes.”  Sheep live on mountains and if you rain on them, they will puff up and float to Lumo, acting as a source of water for his ever-drying self.  Occasionally, even cuter mountain pigs will appear, which serve an entirely different—and hilarious in its surprise, so I won’t spoil it—purpose.  Possessed teacups start invading the planet in later levels, and spew out top hat-wearing finger monsters once they are “cleaned.”  Again, 100% true.  This randomness wrapped in youthful charm works for Kumo Lumo and keeps it engaging: what will we encounter next? 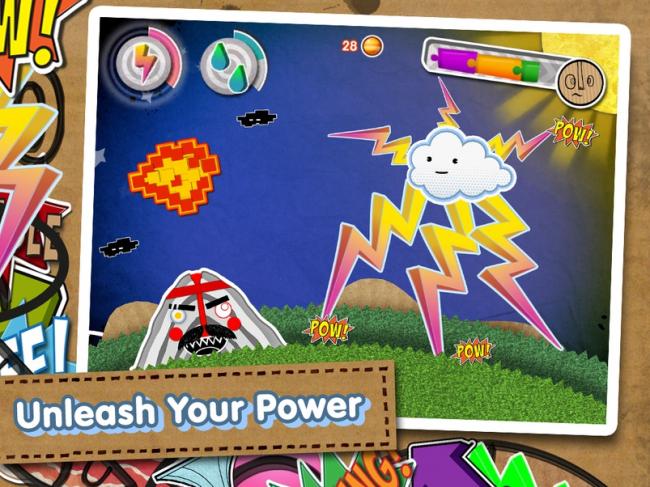 Unfortunately, what doesn’t work well is the gameplay itself.  Although the premise, graphics, and presentation of Kumo Lumo are all original and endearing, its gameplay becomes repetitive quickly.  Lumo is a storm cloud, and as such has two abilities: rain and lightning.  Developer Blitz Games Studio has done a nice job of creating a variety of objects and villains to storm upon, but ultimately you will be doing just that each level: rain on X number of Y items.  Rain on ten trees to create ten forests.  Zap twenty pirate foxes with lightning.  Rain on thirty fires to put them out.

This repetitiveness would have been more acceptable if the game’s star system for levels presented a challenge or variation on gameplay.  As with most level-based games, each stage of Kumo Lumo gauges your completion on a three-star scale.  Everything you grow, destroy, or collect in a stage will award you points towards these stars.  However, this means that achieving three stars requires you to spend extra time floating around each level, raining on things that have no relation to your actual goal.  You may need to kill ten pirate foxes to pass a level, but in order to earn three stars you’ll also have to rain on five mountains, collect ten sheep, destroy three volcanoes, etc.  The later a level, the more extra, and ultimately repetitive, work you’ll need to do to three-star it.  Of course, you never need to achieve three stars to move on, but it makes the achievement system feel like a chore. 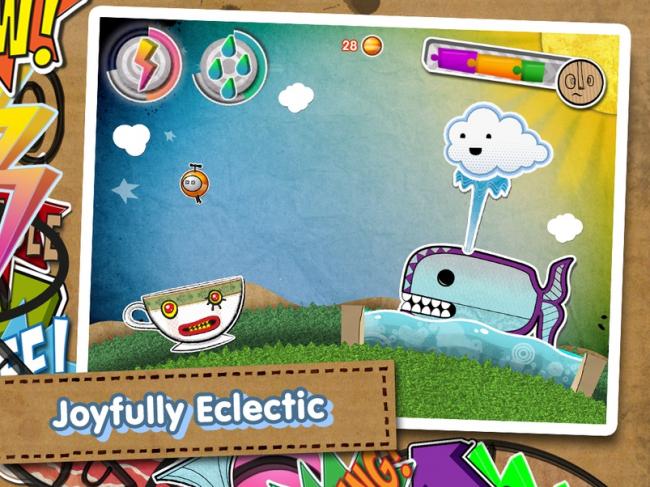 The third, and most egregious gameplay issue, is the game’s lag.  Kumo Lumo uses a unique two-tiered movement system:  Lumo can be moved around the screen by dragging him (useful for collecting clouds or avoiding dangers), and the world itself can be moved by dragging the bottom of the screen left or right.  This causes Lumo to fly around the world, finding new areas to rain on, or eventually making a full circle back to where he started.  On early levels, and at the beginning of stages, the game plays smoothly with both Lumo and the world responding to your directions immediately.  As stages get harder, or you stay within a level longer (trying to earn three stars, no doubt), they will fill up with more and more enemies and other items, which eventually creates nearly game-breaking lag upon moving the world.  It’s extremely frustrating to be near the end of a level, only to drag the world lightly and have it zip forward at a ridiculous speed, throwing Lumo into hordes of enemy clouds and lava bombs.  Attempting to correct this usually results in Lumo being forced back into the same lava again and again, until he’s evaporated and you have to start over.

This is, hopefully, a correctable issue that Chillingo will address in a future update.  As it stands today, Kumo Lumo is an adorably strange game that has stolen my heart, but not a spot on my must-play list.  A rainy day game, for now.

Edit: As of a server update this morning, the predominant lag issues affecting Kumo Lumo‘s gameplay experience have been mostly resolved.  I’ve revisited some of the laggiest stages and they are infinitely more playable.  The Kumo Lumo team seems to be working hard to keep making their unique game even better, and for that we tip our (rain) hats to them.