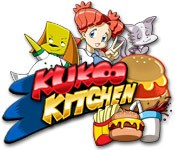 The premise of Kukoo Kitchen involves space travel, a talking dog with telekinetic powers, an empire of slugs, and an obese frog as President of the Galaxy. The story is… cuckoo… but very much what you’d expect from an anime-style children’s cartoon.

Kukoo Kitchen is a time management game that has you preparing fast food for some very bizarre characters. It’s lots of fun and very quirky, but probably best-suited for young manga fans and people who gush over all things "cute and cuddly."

Kukoo Machines Automated Culinary Arts makes amazing cooking machines for space cooks. Unfortunately, there are no space cooks, so the business is a total flop. With the space ship rent due, inventor Jessica needs cash fast, so she sends her friendly puppy named Chill-Li to work. Aside from being able to talk, he also happens to be a psychic with telekinetic powers, and he’s a chef. That certainly makes finding employment much easier if you’re an animated canine.

Chill-Li’s job as a space cook involves reading the minds of customers, and preparing their orders. There’s an assembly belt which moves the trays from one end of the screen to another, and the objective is to place all of the food on the tray before it reaches the hungry customer. If you do it right, you’ll earn enough cash to meet your goal for the round.

You can view two orders at a time, but must assemble them in order. Preparing most foods involves clicking the dispenser and waiting for the product to appear. Some foods  require a multi-step process, like putting together a pizza out of a base and sauce and toppings, or assembling chicken fajitas. There are many food types and upgrades, along with plenty of optional additions to earn you extra cash, like adding cheese toppings to come foods, or adding a toy to the meal. The toys, in particular, have a huge impact on your score, since they can earn you nearly double the cash.

Should you get confused, you can tell if an order is complete by looking at the color of the tray. Red means done, while gray indicates a missing item. If you mess up, you can right click to instantly delete an item. However, there’s no power ups to help slow the conveyor, so you have to be precise. Luckily, this is not too hard until the very end of the game, so you should be able to earn the expert “golden fork” quite often. If you didn’t do as well as you’d like, you can always replay rounds for a better score.

Before you advance from one of the four map regions to the next, you’ll have to beat a tough mini-game. This varies slightly as you progress, but includes tasks like memorizing orders, or using the process of elimination to guess at what a customer wants.

What stands out most about Kukoo Kitchen is the animation. It’s very polished, and could easily be straight out of a television show. The cut scenes are really fun to watch, and have great voice overs with full animation. While the story is absurd, it’s intentionally so, with plenty of goofy humor. The music is good too, and there’s at least 4 hours of game play to enjoy.

There are lots of upgrades you can buy, but you are tutored very gradually on how they work, so it’s never too difficult. If anything, the first 34 out of 36 boards are very easy to beat. The pace is fast, but you still have plenty of time to do everything. This can be a plus or a minus, depending on who’s playing.

On the downside, those numerous upgrade machines are often unmarked, making it confusing towards the end. For example, the carmel and catsup dispensers look very similar, and are right next to each other. Also, the directions can sometimes be unclear, especially when it comes to the four mini-games.

Those of you that don’t like shooters might be disappointed to hear that the second half of the game features occasional alien attacks. These require you to rapidly click the mouse on the invaders. It breaks the speed a bit, but thankfully doesn’t happen too often.