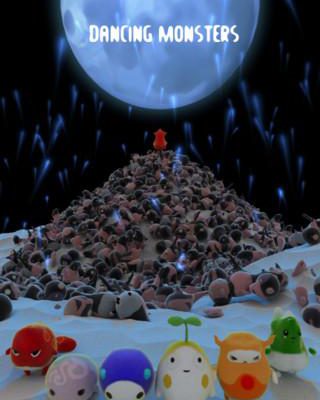 Kotomon down, you’re the next contestant on “What Went Wrong!?”

When Kotomon hit the App Store, I literally jumped at the chance to review it. And if I didn’t, you certainly can’t prove otherwise. A game boasting dancing, monsters, and shooting from key members behind Q Entertainment’s iconic titles Rez and Lumines? Where do I sign up!? Yet our fearless Editor-in-Chief Jim was a little skeptical: “I’ve come to realize that ‘from the makers of…’ always spells disaster on iOS.” Oh well, what does he know? I thought, hitting “buy.” A lot, as it turns out.

From the comfort of the App Store, Kotomon has a lot of promise. Buoyed by delightful cel-shaded graphics and naturalistic vistas, it depicts a world filled with fantastical blobular creatures trailed by bulbs of multicoloured light. Read the description and things get even better, as it sets the scene for a sort of weaponized Pikmin; an adventure where you discover and corral “friendly monsters,” and juggle their unique powers to blast them at scores of enemies. But then you play it.

Right from the outset, Kotmon is beleaguered by obtuse design choices and an overall lack of guidance. Plopped down into the main “hub” world, you’re told how to move – with an inexplicably shifting virtual joystick, by the way – but not given any sense of where you’re supposed to be moving to. And while this would be one thing in a title billed as an adventure game, it proves unsettlingly vague here, especially when shortly after you begin, a prominent “play” button appears. “Play what? I’m still trying to figure out the points at which my joystick disappears!”

The same issues pervade actual gameplay, as you begin a level and are told to move towards the tiny blue on-screen figure to hitch up to him, and tap once more to shoot, but not given a clear sense of what your objective is beyond that. I’m not demanding a step-by-step manual, and enjoy it when a game is relatively hands-off, but Kotomon offers you instructions, and splits them up into unhelpful chunks, which proves particularly off-putting for early-game immersion. 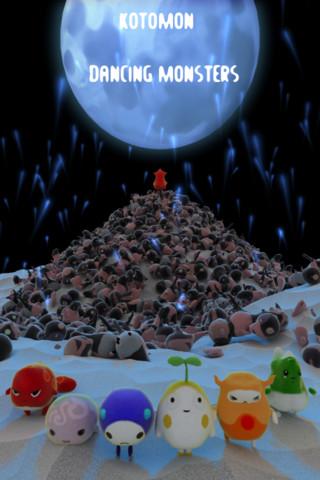 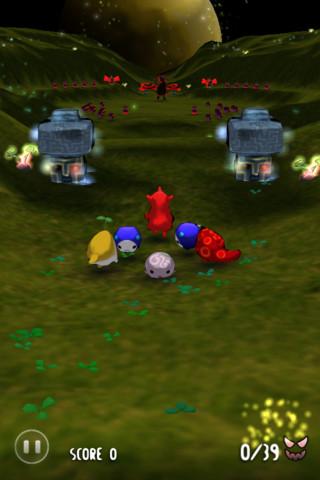 Not that it makes much of a difference, as both mid and late-game immersion aren’t really an option here either. Once you get around to figuring out where it is you’re headed – to the flagged zone in each level with your squishy bullets in tow – getting there is almost always an ordeal. First and foremost, Kotomon‘s solution to the admittedly less-than-perfect virtual joystick craze is a disastrous one. By arbitrarily telling you to use the any part of the screen, the game has you moving at a haphazard pace as you readjust to compensate for approaching enemies and projectiles, frequently having to choose between keeping track of what’s going on, and leaving enough room to manipulate your character and its living weapons.

Speaking of which, virtually nothing in the way of play is intuitive. Whether it’s turning around to chase a waddling projectile you’ve shot, running away from approaching baddies who have you forked, or taking down a row of enemies with what you thought was the perfect shot, everything seems to take multiple tries and painstaking setup. None of which Kotomon seems to have any patience for, as one hit – or fallen comrade – results in an automatic retry. Like a professor quizzing on material they clearly never taught in class, the game expects you to keep a pace it hasn’t equipped you to match, and unreservedly frustrates if you can’t outperform its flaws. For those who download it – who shouldn’t be any of you, by the way – you’ll know exactly what I mean when you reach the first lava stage. 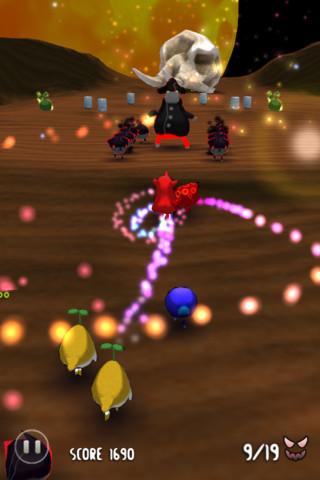 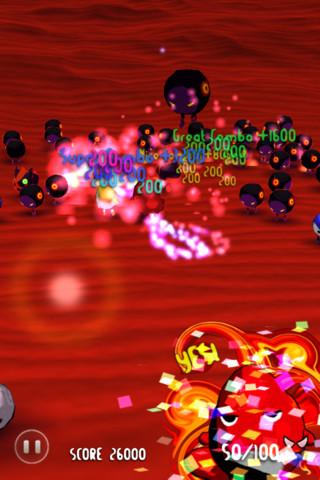 The worst part of it all (and reason Kotomon earns the stars it has)? There was clearly a great idea here. In flukey moments, I find myself smiling at an expertly (read: luckily) curved shot as it bowls down 15 enemies, or fascinated to meet the new creature I’ve just hatched. The eclecticism of a game like Pikmin mashed together with the iOS-friendly dual stick shooter genre? It’s a match made in geek-out heaven crafted by people who’ve got several virtual paradises under their belt. Unfortunately, the team at the fledgling Monstars Inc. has a lot to learn about this platform if they want Kotomon to join the ranks of their other titles. As it stands now, I find myself stressed at the end of one level, dreading the beginning of the next, and ultimately, pressing the home button pretty quickly.