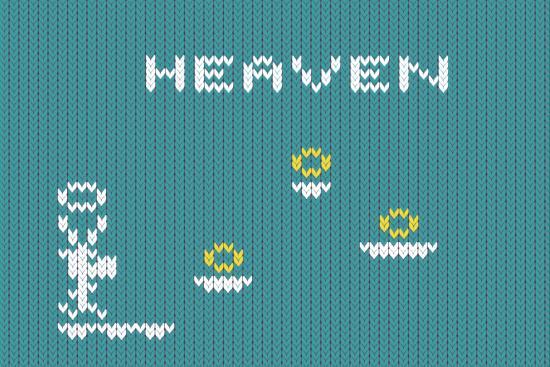 Knitted Deer tries hard, but it’s not equipped to survive in the endless runner jungle.

Oh deer. At first glance, Knitted Deer is a unique take on the endless runner, which is arguably the most crowded genre on the App Store. The game’s graphics are not built from 3D models, or even pixels, but knitted patterns, which gives Knitted Deer a cuddly, warm aura—at least until a bat rips your head off and carries it away by its prongs. Problem is, aside from its unusual graphics, Knitted Deer isn’t particularly original or interesting.

You play through Knitted Deer as a few bits of yarn that are knitted into a vague deer-like shape. Think about the tacky Christmas sweaters your grandmother knits for you every year, and you should get a good idea of the game’s protagonist and the world he inhabits. Incidentally, it’s interesting how closely basic knitting patterns emulate Atari 2600 graphics.

Deer runs continuously from left to right. He can jump and double-jump over traps and obstacles. He must also shoot down enemies that attempt to swarm him. The bad guys are made of yarn, too. Maybe you own a sweater with a deer on it, but has your grandmother ever produced a garment decorated with bats and bear traps?

Knitted Deer‘s running and jumping action takes place on three planes: Heaven, Earth (which is where you begin your run), and Hell. Gameplay remains more or less the same through all three realms, and you can expect to wind up in Hell often enough since you’re automatically transported there when you die on Earth.

Outside of Knitted Deer‘s unique visuals and frankly awesome soundtrack, there’s not a whole lot going on with the game. Deer just ambles along and you need to jump and shoot at the right moments. The App Store’s endless runner category is packed with top-notch offerings like Rayman’s Jungle Run, so a game has to be super-special if it hopes to stand out. Jumping over boxes just doesn’t cut it anymore, no matter how interesting those boxes look.

It doesn’t help that Knitted Deer‘s hit detection is a bit off, and that it penalizes you in weird ways. When most endless runners trap you behind an object, you need to scramble over it before the screen catches up and squishes you. In Knitted Deer, you die as soon as you touch the side of a box. If you even catch on the corner of a box when making a jump, you’re thrown down into Hell. In other words, if you don’t land squarely on top of a box when making a jump, you’re dead. It’s sloppy programming, and incredibly frustrating.

You can collect coins and upgrade Deer’s weapons and abilities, but you might find that the upgrades don’t alleviate the frustration much. Worse, the store is difficult to navigate thanks to its hard-to-read “knitted” text. And to think people complain about Comic Sans.

Knitted Deer boasts cute graphics and a great soundtrack. Its knitted world is an interesting place. Unfortunately, if an endless runner doesn’t excel in every category—and Knitted Deer doesn’t—it’s going to get run down and left to bake on the asphalt.