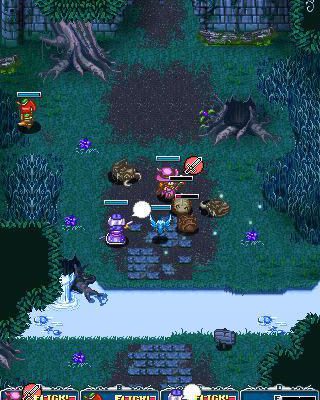 Fighting monsters is a tough job. Sometimes all it takes is a hero. Sometimes it takes six. Knights of the Phantom Castle is a unique strategy title that puts players in control of an army of knights, bouncing back and forth between controlling each and every one of their actions in real time.

The object of the game is fairly simple. Complete a variety of missions using a hand-picked group of knights. Fight monsters, work together, and above all else – survive. It’s how the gameplay unfolds that makes Knights unlike anything we`ve ever seen before – and that’s a good thing.

Players will pick and choose from a variety of fantasy archetypes to assemble the best team for each mission. Soldiers, assassins, healers, rangers, defenders, and mages will all be at your disposal – each with their own strengths, weaknesses, and abilities.

Since these archetypes are fairly standard fantasy fare, most players will immediately know what to expect from each class of knight. Rangers and mages are great at a distance, for example, while “defender” is simply a polite way of saying damage-absorbing tank. Understanding these class-based basics will give you something of a leg up, because once you get into the abilities of each – and then the actual combat – things can get a little hairy. 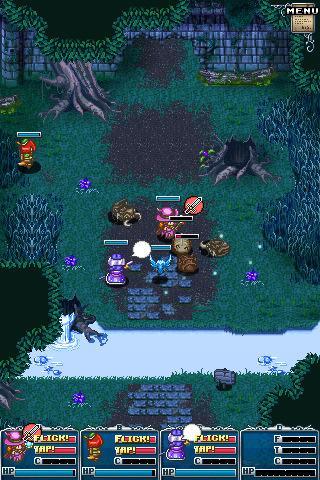 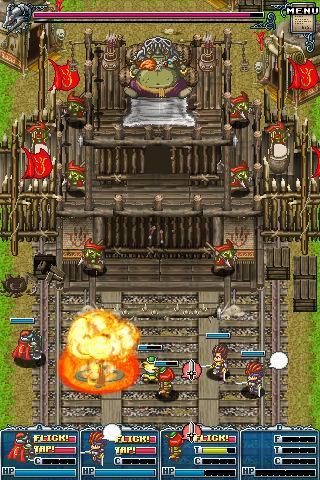 Each type of knight has three special abilities that make them unique – one that’s activated by tapping, one that’s activated by flicking, and one that’s activated by holding your finger down as a gauge fills up. The ranger, for example, can make an explosive, fire a laser arrow, and remove status impairments like poision. The healer on the other hand, can heal those near her, fire a ranged bolt of healing, and resurrect her fallen comrades. Remembering all 18 abilities (6 classes x 3 abilities) can feel daunting early on, but it only takes a few missions with each class for these to become second nature.

Managing these classes in battle, however, is a whole other beast entirely. Depending on which knights you decide to bring into battle, you’ll find yourself swiping and tapping like crazy to make sure everyone stays in the right position. Knights of the Phantom Castle is a real time strategy game in the truest sense of the word. You may not be gathering resources and building bases, but you’ll need to think strategically, and in real time.

It can be a real challenge to make sure your defender is keeping the onslaught of enemies at bay while your healer hides behind keeping him alive and your ranger tries to peg the collective hordes off with laser arrows – but that challenge becomes all that much harder in the face of the game’s two biggest flaws; inconsistent controls and major spikes in difficulty.

It’s not that the controls are broken, but the game doesn’t always know the difference between an ability-related flick and a simple attempt to guide your knight to a new location. Likewise, ability taps don’t always register on the first try, costing you precious moments of your attention that really should be spent on the next knight in need. Movement can be frustrating too, as your knights will always move in a straight line after you’ve directed them, often getting stuck behind other characters or obstacles needlessly.

Combine the control-related frustration with the occasional mission that out of nowhere ramps the difficulty from a 2 to a 10, and you’ve got the makings of an excellent formula unravelled by poor balancing and design issues.

Originally released back on the iPad back in April, the app was recently updated to offer universal support making it playable on the iPhone as well – all included in the single purchase price. In most releases like this, the iPad version ends up feeling slightly superior to the iPad, but Knights turns that experience upside down. Control issues were less frequent when playing on the iPhone, and the 16-bit graphics looked much crisper when shrunk down.