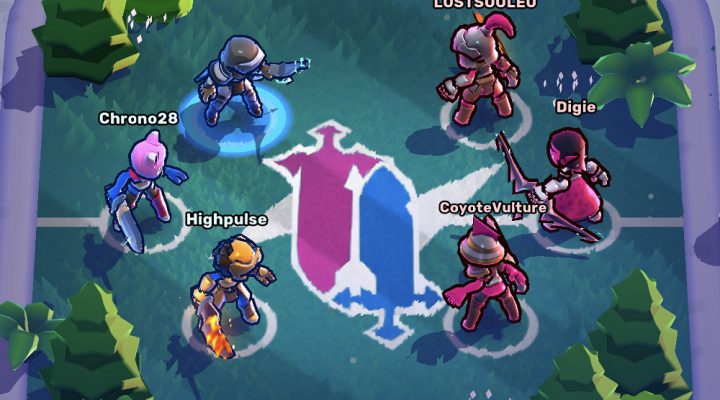 Always something to do

Lacking a bit of depth

Can get a little grindy

Knight’s Edge is a multiplayer midcore dungeon crawling hack-and-slasher that lets you jump in and out of fast-and-furious battles to the boss. It’s got some neat ideas, and while it might be lacking in depth, it certainly isn’t lacking in fun.

The game sees you and two other players teaming up to tackle the monsters in a bite-sized dungeon. Kill all the monsters in the room and you’ll move on to the next. After a few rooms you’re faced with a boss – kill the boss and complete the challenge.

The twist is there’s another team of players attacking a parallel dungeon and you need to finish your run before they do. You can also move across to mess them up, fighting against them and bringing back bonuses to your team.

When you’re not fighting, you’re opening chests, equipping new gear and toughening up your warrior. The weapons you equip change the way your character plays – bows turn you into a squishy ranged damage dealer, blades make you a stronger, up-front slasher.

A match takes just a handful of minutes, and as you fight your character will get more powerful. You’ll unlock new perks, and depending on the level of your weapon be able to choose from different ones as you level up. The scraps are tight and challenging, and there are other obstacles you need to navigate as well.

There’s a compulsion to Knight’s Edge that the best midcore games need to have to keep you interested. You’ll want to open the next chest, get the next weapon, complete the next challenge. You can invite friends to come and join the fight as well.

This is a game that balances mobile sensibilities while still giving you enough control to make you feel like you’re involved. It isn’t super deep, but there’s enough entertainment here to keep you coming back for more over and over again.