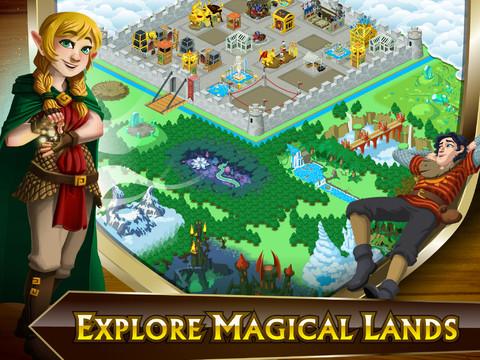 Protecting and rebuilding a freemium kingdom is fun again!

Most free-to-play games adhere to a fairly strict set of rules, and doing so tends to make them far less interesting than they could be. However, as with most other games of any genre, taking a familiar theme or idea and doing something even slightly out of the ordinary with it can make a huge difference. It’s probably the reason I’ve been enjoying Knights & Dragons: Rise of the Dark Prince so much.

An evil prince – more mischievous than malevolent, really – has been harassing the land with his monstrous minions. Shrouding the kingdom in fog, spreading mass panic, that sort of thing. Players take on the role of a lone knight commander tasked with putting a stop to all these shenanigans, which is a little weird when taking normal military hierarchy into consideration but hey, it’s a video game. Anyway, the kingdom is in shambles and resources are spread fairly thin, so they’re going to need to start gathering and rebuilding straight away. The typical themes of constructing buildings to access new features, levelling up to access new buildings, collecting cash from money-generating structures, and completing a constantly updating list of quests are all present and accounted for. In addition, players can run their knight(s) through an assortment of dungeon-like combat missions for experience and crafting items as well as a PvP arena for some extra cash. The crafting items can, in turn, be used to create better gear for the knights and increase their combat efficiency.

Much of Knights & Dragons‘ mechanics are about as simple as one would expect for a free-to-play title, but that doesn’t mean they’re without merit. What’s important here isn’t the lack of skill required for fighting or the lack of complex strategy in utilizing equipment, but the fact that this kind of stuff is actually the focus. See, unlike many freemium town builders the actual building has a much smaller role. It’s there and it brings in some cash, but for the most part it sits in the background doing its thing while players are otherwise occupied. Developers take note: this is a great way of handling the pacing of a free-to-play game. All that time consuming stuff that requires actual minutes to complete is still there, but a number of other activities are present to keep players engaged. Sure, it’s possible that the knights will need to heal up after too many excursions or that players will eventually run out of arena fight attempts for a time, but that stuff takes a while to happen and by the time it does there are bound to be other tasks to complete.

Of course none of that means that Knights & Dragons is immune to many of the typical free-to-play issues. The quests’ introductions leave something to be desired, for one thing. I can only take so much cheesy dialog about missing wands (it was a graduation present!) and clumsy squires before it starts to become a grind. Being able to skip these scenes lessens the irritation, but it doesn’t make the attempted jokes any more effective. It doesn’t help that the text for all this is so tiny on my 3GS’ screen. It’s also rather irritating that I’m unable to swap between different knights during combat. Rather than being able to switch to a less injured knight -possibly at the cost of diminishing the special attack meter – I just have to sit there and steadily work my way through the ranks. It seems like a small gripe, but I think even such a small feature would add a little more strategy to the combat. At the very least it would make it feel a bit more engaging. 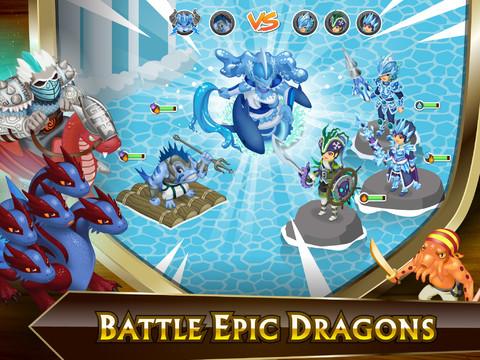 Many of Knights & Dragons‘ bits and pieces seem like familiar mechanics that probably wouldn’t stand out in a free-to-play crowd, but it’s the combination of all of them – plus a shift in gameplay focus – that makes such a difference. Despite my initial impressions this is very much a kingdom worth saving. Even worth fighting for.