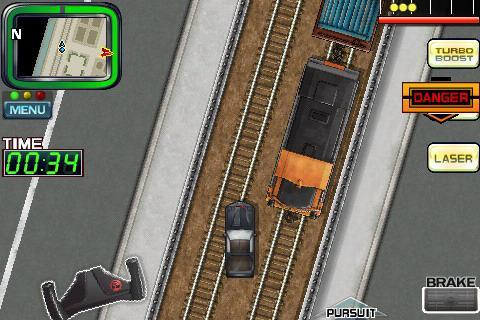 If you were around in the 1980s, then odds are you watched the TV show Knight Rider. It starred a pre-caricature David Hasselhoff as a rogue crime fighter who drove around in his super talking car KITT (Knight Industries Two Thousand, thank you), finessed the ladies with his manliness, chased bad guys down, and saved the day. Knight Rider for the iPhone is absolutely nothing like this.

In a weird parallel story of Michael meeting KITT, The game’s 15 missions have you traipsing around a small cityscape running errands, getting from point A to point B, ramming cars and street racing. Sure there is a plot somewhere in there, but it really isn’t worth mentioning. When you realize that it pales to the plot of an 80’s action show, you know you’re trouble.

Beginning with a typo in the very first sentence you read, Knight Rider is missing all the witty banter and over-the-top silliness that made the show great. Rather than cruising around in their cool big rig, Michael just sort of starts up in the middle of the city. Your first objective? Drive to your boss Devon’s house. Then, drive to your partner’s house. Then drive back to your headquarters at Knight Industries. Congrats, that’s the first out of 15 missions.

You don’t even get all of KITT’s cool gadgets right away; they must be earned by completing missions. In the end you can upgrade KITT to have all his trimmings, like the oil slick, laser and the infamous Turbo Boost, but trying to access it on the fly is nearly impossible.

Play control issues plague Knight Rider. It’s like the developers were trying to give you too much control of KITT, and end up giving you very little. You have to tap on KITT to start him up, then try to steer him with the tiniest steering wheel icon on the lower left. Since KITT automatically accelerates, you’ll need to slow him down around corners by tapping the brake in the lower right. But if you need to go faster, you’ll need to tap the Pursuit button to give him a speed boost. Using a weapon involves tapping a tiny button along the right side of the screen.

You see the problem.

On top of all that, there is an overly-useful radar in the upper left of the screen that tells you exactly where to go. It gets to the point where you actually aren’t even bothering to watch the main screen, but rather follow the radar to your objective.

Those objectives, too, are either silly or obtuse. For example, the fourth mission has Michael competing in a street race (no reason is given, but you have to win or else you must repeat that part of the mission). In spite of having beaten the cars to the finish line, I still “lost.” It turned out that I needed to pick up every “skill” icon along the path in order to win, but Knight Rider failed to mention this.

Other times, Knight Rider talks too much. In the middle of a mission, tutorial menus or dialog boxes pop up at inopportune times, such as when you want to try to see the screen to pursue a bad guy, but a headshot of Michael and some speech covers up the bottom half of the screen. It breaks up the already poor pacing and ruins any momentum. 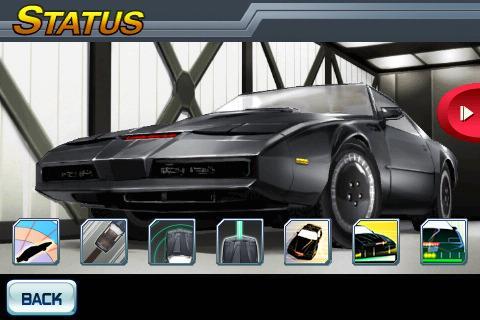 On top of that, the main reason to play is to see some very short clips of the original TV show, many of which would be easily viewed on YouTube. Also, after each mission, you are graded on how well you performed. If you achieve an A ranking in all 15, you can open up a special extra mission.

The plus side is that the missions are fairly diverse and there are some fun references to the show. When following a bad guy, KITT will enter Silent mode (along with a clip of all KITT’s lights coming on from the original show). You’ll have to keep a good distance and, if the baddies stop, so will you. These moments are great, but few and far between.

The graphics hardly help to draw you in. The top-down view makes it hard to see obstacles, and every part of the city looks the same. The cartoon look of Michael, Bonnie, Devon and the other characters just don’t look right, especially if you’re familiar with the show.

It’s amazing that a show like Knight Rider can’t be turned into a good game. It has all the right elements: sassy characters, over-the-top action and a cool car. But, like every other Knight Rider game before it, Knight Rider on the iPhone fails to deliver any of the thrills of the show.