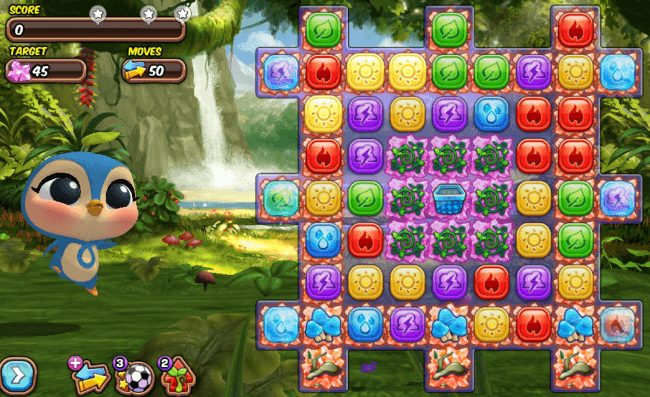 It’s early spring and you’re out for your first walk of the season. As you trot along, something catches your eye: an egg, one quite unlike any egg you’ve ever seen before. You hatch it and guess what pops out? The adorable Kiwi with eyes as big as bowls of milk! Your new little friend needs help moving through the forest, so it’s your job to clear tiles out of the way one match at a time.

Kiwi & Me takes place on a map with a path that leads from puzzle stage to puzzle stage. Simply tap to enter a level, and then let the tile swapping begin! Each level has a goal you must meet in order to proceed. Usually these are simple things like score a certain amount of points or clear all the crystals out of the way. Your moves are limited, so you have to conserve swaps and use them only when you’re sure it’s a good idea. 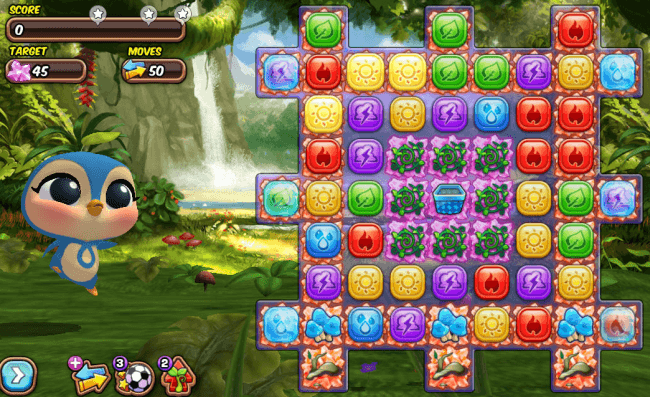 Matching four tiles creates a power tile, a colored orb that will unleash a powerful tile-clearing move when matched that’s unique for every color. Blue power tiles, for example, clear a horizontal path, while green tiles clear a localized area in all directions. By creating bigger matches you can produce leveled-up power tiles that are even more effective, and if you swap a pair of power tiles, be ready for nice things to happen! Naturally, you’ll want to unleash these bad boys as often as you can.

Special items are also part of the Kiwi & Me experience. Each level has a hidden item that can appear for Kiwi to unwrap, but it isn’t guaranteed to appear, which means you’ll want to replay stages as often as you can. Drop the item to the bottom of the screen and complete the level to see what item Kiwi gets to play with. These items have practical uses, too, such as the soccer ball you find early on that lets you clear roadblocks on the map screen.

Kiwi & Me isn’t about speed, so unlike Bejeweled and Zookeeper you can’t continue making matches while tiles are settling down. Make a match, wait for everything to disappear/restock, and then make another one. This cuts combos almost entirely out of the picture, but the game wasn’t really designed around that in the first place. Kiwi & Me is all about big matches, special items, and power-ups. 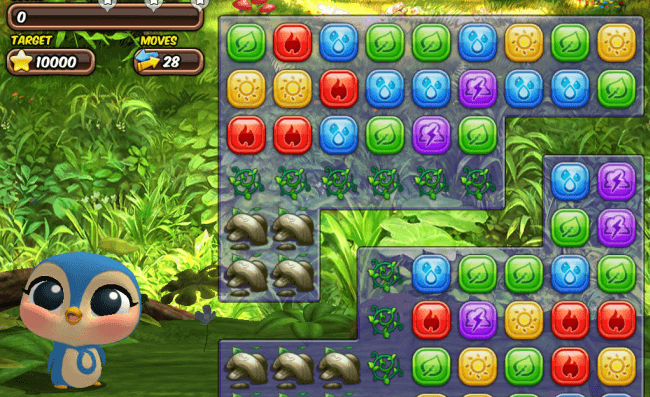 Kiwi & Me is saddled with a rather pointless freemium model that has some very poorly priced purchases. For example, if you run out of moves in a level you can buy a handful of extras. This carries a small price tag, but when you consider the moves are only for that level, it would be absurd to actually pay for it. There’s also the option to get big packs of moves and other boosters, but here the prices are so inflated that once again it’s absurd to fork over the money. Kiwi & Me is perfectly enjoyable without the in-app purchases, so if you simply ignore them you’ll have a much better time.

With one or two questionable game design decisions (in-app purchases, and a frustrating move limitation), Kiwi & Me falls just short of perfection. It’s a simple game with a simple goal in mind, and because it’s so adorable it’s going to attract some attention. Be patient and try not to shout at the IAP section, and you’ll be rewarded with a very pleasant casual puzzle game.

Skulls of the Shogun Review