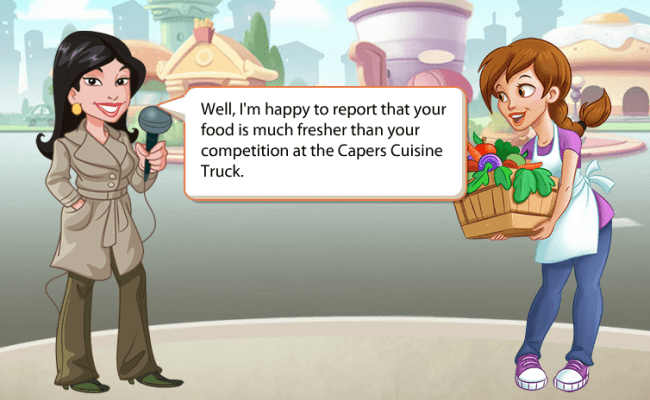 City-dwellers know that some of the best food in the world comes off of food trucks. These mobile kitchens serve up deep-fried delights, grilled goodness, and fresh fare (but mostly deep-fried delights). Kitchen Scramble on Facebook is a time-management game based around an entrepreneuse who aims to dish out a diverse menu from the back of her own food truck. It’s a noble ambition; too bad the core gameplay is basically the same meal we’ve been served over and over.

Your driver and cook in Kitchen Scramble is Pepper Mills, a young woman harboring big dreams about serving healthy food to the masses. Unfortunately, her friend Candace is bent on starting a business that serves up wads of processed fast-food garbage. Pepper doesn’t believe she can strike out on her own. She’s devastated until she gets support from Chef Crisp, who advises her to operate a food truck. Pepper agrees, and begins serving meals on wheels. 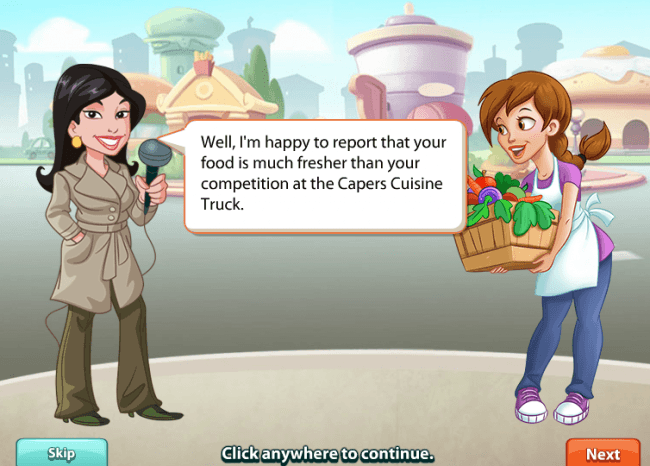 Chef Crisp shows you the ropes, and in no time at all, you start rolling through towns with delicious names like Waffleton, Pittsburger, and Molassessippi. There are several levels in each city, and each one is teeming with hungry men and women. Kitchen Scramble plays much like a simplified version of Diner Dash. There’s no seating and no clean-up: your job is to focus on feeding your ravenous customers.

That’s not to suggest that Kitchen Scramble is easy, though it starts off gently. Your first customers only want simple dishes, like baked potatoes (made by putting potatoes into your oven) and fried eggs (made by cracking eggs into a pan and waiting for them to fry up). In time, you unlock more ingredients, more recipes, and more appliances. You’re expected to combine ingredients to make more complex dishes. For instance, preparing an omelette requires you to blend an egg, onion, and tomato, and then pour the batter into a frying pan. Similarly, fixing a hamburger requires you to fry up a patty, and then assemble it with a bun and vegetables. This multi-tasking becomes complex and frenzied quite early in the game, which might turn off some players. 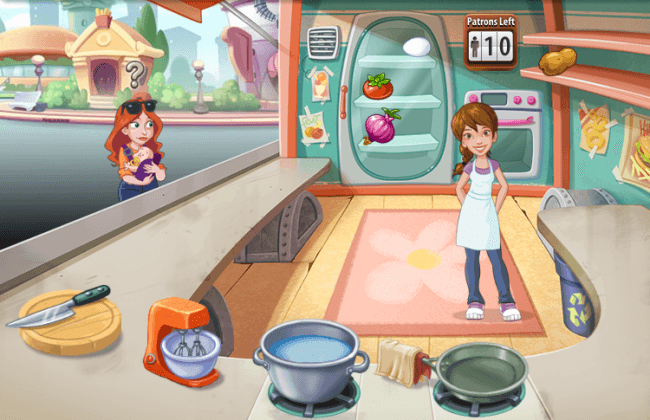 Your customers’ patience ticks down the longer you make them wait for their food, but if you serve them quickly, you’ll get paid well and will receive a big tip. Whenever a new customer shows up, you have a few seconds of grace while he or she decides on what they want. During this time, you can guess at what you need to prepare based on the physical appearance of your customer—truckers like fried food, the reporter likes salad, the college student likes potato-based dishes—but if you guess wrong, you waste time and food.

Despite its cute food truck theme, Kitchen Scramble‘s frenzied time-management/food preparation mechanics aren’t anything you haven’t experienced before. You’re still in for a mouse-clicking good time if you decide to play (and it’s liberating to not have to bother with seating), but don’t expect to be blown away. Worse, don’t expect to be able to play for long before you’re forced to rest and/or pay up for more energy. Slamming into the ol’ energy paywall just when you’ve found your groove is like biting into a sandwich and finding half a roach. 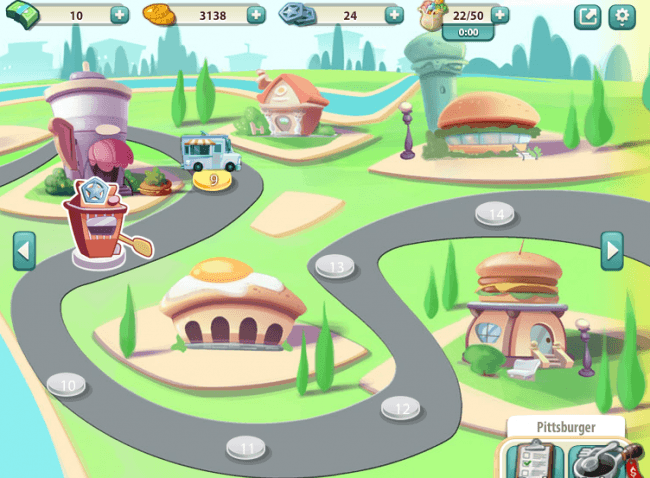 Playing Kitchen Scramble is like indulging in comfort food. It’s good stuff if you’re in the mood for a familiar taste, but it’s just stomach-turning if you’re not.