Home / Reviews / King’s Quest I: Quest for the Crown Review

King’s Quest I: Quest for the Crown Review 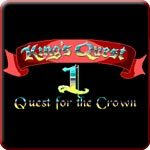 Sierra’s King’s Quest holds a special place in the hearts of many veteran PC gamers (this writer included). The recent release on Steam of the King’s Quest Collection – a package that bundles the first seven games together as a single download – allows fans to enjoy the series all over again in a new format. King’s Quest I: Quest for the Crown is the game that started it all.

King’s Quest is set in the fantasy kingdom of Daventry, which has fallen on hard times. The land is being ravaged by monsters and its three most valuable artifacts – a magic shield, magic mirror, and magic chest – have been stolen. King Edward is too old and frail to do anything about it and has no heir, so he calls his most trusted knight Graham to the throne room and sends him on a quest to retrieve the items and save the kingdom. Edward promises Graham that if he is successful, he’ll become Daventry’s new king.

King’s Quest originally launched back in 1985, when adventure games that actually contained graphics (instead of just paragraphs of text describing each scene) were still fairly new. Instead of pointing and clicking on the environment with the mouse, you actually had to use the keyboard to type the commands you wanted your character to perform, like "open door," "look in well" and "take dagger."

The version of King’s Quest included in the King’s Quest Collection is an updated version from 1990 that contains better graphics and somewhat of a mouse interface: you still can’t click on items very effectively, but you can use the mouse to move Graham by clicking on the area in the scene you want him to walk to.

Given that King’s Quest was on the frontier of these new techniques, it’s easier to forgive its simplicities and occasional frustrations.

Besides walking (at adjustable speeds) Graham can jump and swim, which might not seem like a big deal but it was exciting back then, believe me. The keyboard isn’t all that precise, which makes navigating around rocks or trees challenging at times, and things like climbing beanstalks or walking up a curvy set of stairs downright treacherous.

As Graham explores the countryside of Daventry he’ll encounter various characters and objects to interact with. Although the graphics were overhauled in 1990, they’re still primitive by today’s standards, as is the "bleeps and bloops" sound palette.

Daventry borrows many of its situations, inhabitants and puzzles from European fairytales. So, for example, when you encounter a witch in a gingerbread house and she bends over her oven, you should know exactly what to do next. And when there’s a stubborn troll who won’t let you cross the bridge, and a goat in a pasture nearby, the rest should be obvious. And what do you do with a handful of magic beans? Well, duh! For those of us who grew up with these stories the answers are all second nature, but for those who weren’t, the solutions to puzzles may not present themselves quite so easily.

Aside from that, the challenge is quite manageable. In general, the items that are supposed to be picked up and/or used will stand out and look unique from the background, and it’s blatantly obvious that you’re supposed to investigate the various caves, doors, houses and suspicious looking large holes in trees and logs.

The game’s save and restore capabilities will come in handy, as it is quite easy to die: be it through falling accidentally, drowning, or being killed by various monsters. Some deaths are more ignoble than others, for example one of the puzzles calls for moving a rock out of the way to reveal a hole in the ground. If you happen to be standing south of the rock it will roll onto you and crush you.

A nice thing about the 1990 revamp is that it’s now much harder (and maybe even impossible) to become "stuck" in the game – that is, reaching a point and then realizing that you’ve done something wrong along the way and can’t continue. That said, there’s more than one way to go about beating King’s Quest, and the "best" solutions will earn you the maximum number of playthrough points: 158.

So there you have it. A light-weight adventure that makes up for with charm what it lacks in substance. If you’re interested in the history of adventure games, this should be on your list of "games to play in my life at some point." Maybe it doesn’t deserve to be at the top of that list anymore, but it’s still a nice little chunk of history.

She is a Shadow Review

Many Years Ago Review