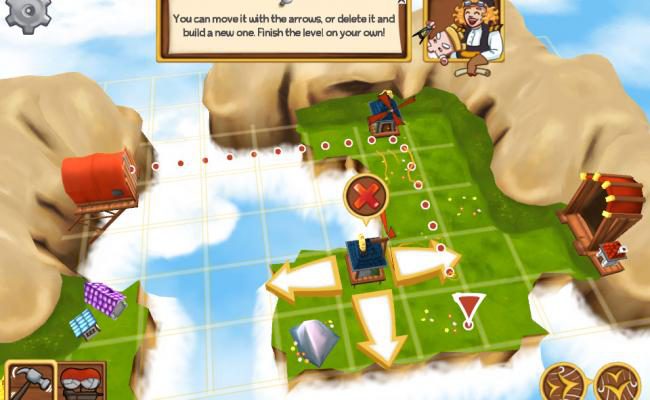 Castles in the Sky

Kings Can Fly is an infinitely charming and deviously clever puzzle entry from Firedroid. In this Steampunk-inspired pathfinder, a bored and aging king is suddenly snapped out of his ennui when his chief Captian suprises him with a plan to explore the Sky Kingdom via a caravan of zeppelins. Of course, this is easier said than done, and it’s ultimately up to the player to strategically place fans of various types along a path filled with calamity in order to push the airborne caravan exactly where it needs to go. It’s a simple concept that’s very well executed, and it’s a whole lot of fun.

The game begins with a nicely illustrated world map that shows the player the scale of the game. From there, a quick tip to get the player acclimated with the controls and then it’s off to an overhead 3D view of a level that resembles a modern version of Populous (that can be rotated and scaled as needed to better plan your caravan route). From there the player can press the build icon which is represented by a “hammer” button in the lower left corner of the screen, and choose where to place his series of fans that push the caravan in the appropriate direction. Once you’ve worked out an acceptable route, you can press the airship button which sends your caravan on its way and watch as they round corners one by one and desperately try not to crash into the side of a mountain or drift into a hungry vortex–until they finally reach safety on the other side of the playfield. Or maybe not. The later levels are anything but a breeze, and all it takes is one misplaced fan to put the kabosh on your skyward travels. But if that happens, it’s quite easy to destroy one fan and plant another in its place. And helpful advice on fan placement is always a mere button press away. There’s also a nice fast forward button that speeds up the caravan travel animation in case you get stuck on a level. This feature helped to nip frustration in the bud more than any. 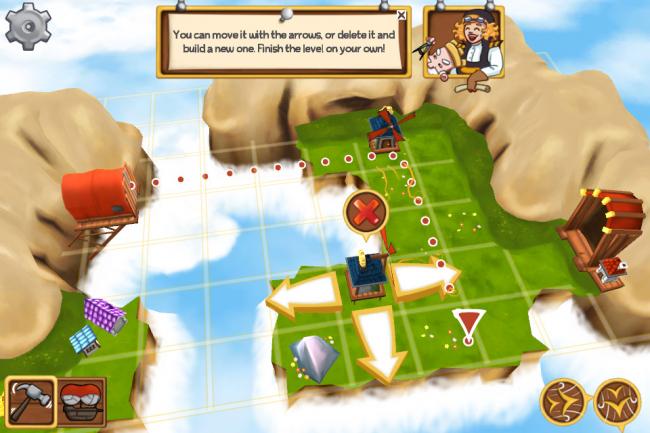 The graphics make an effective package. Nice 2D character art accompanies smile-inducing storyboard sequences, and the 3D level design is rendered very well. The world map that shows the level layout is filled with little details like rolling clouds, spinning windmills and puffs of smoke pouring from tiny houses below. Kings Can Fly isn’t going to win any awards in this sector, but the art adequately conveys the fantasy steampunk feel the game was going for. It’s kind of sketchbook-y, but it’s an inviting style. The actual 3D playfield is a bit more impressive while simultaneously maintaining the flat-shaded toony aesthetic the entire game is wrapped in, and just like on the world map, fine details such as drifting clouds, and flowing banners add a very nice touch. I was also impressed by the character design. The king and his captain were a joy to watch and I would love to see them in future adventures.

The music did get on my nerves after a while. It’s a medieval mishmash of period instrumentation. A bit generic, and I eventually switched it off. Shame it wasn’t a bit more catchy. 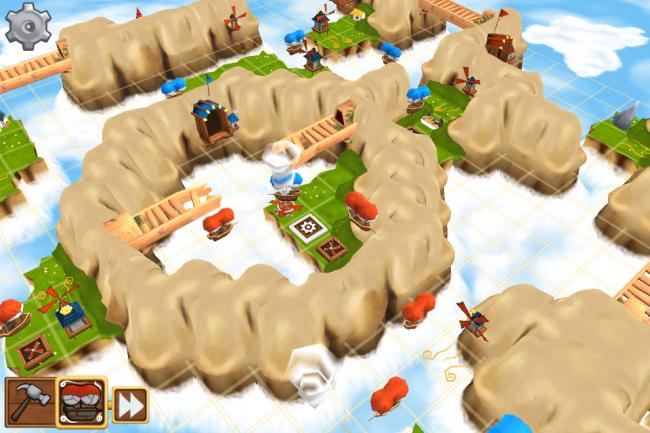 All in all, Kings Can Fly was a fun little adventure. Just difficult enough to be rewarding, but with just enough helpful gameplay features to ward off frustration. The core concept is well executed, and mistakes in planning are easy to correct which gives Kings Can Fly that coveted “just one more round” appeal. If you’re a fan of puzzle adventures you should give this one a shot. You could certainly do far worse.