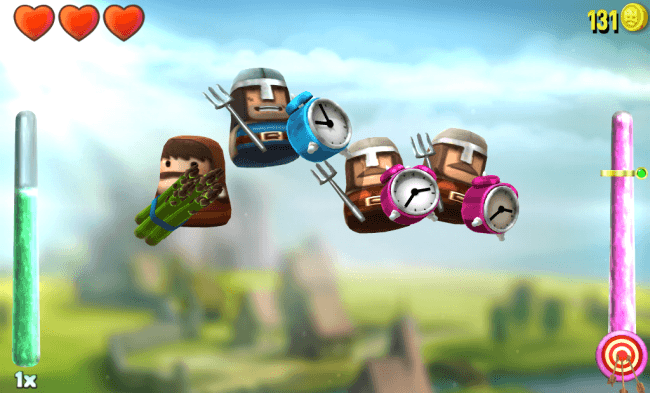 Billed as “The Next Generation Slicing Game,” KingHunt is here to serve as a fitting reminder of why Halfbrick’s Fruit Ninja was such a huge hit, and to give us some food for thought on what a deeper “slicing” experience could really be like in 2013. The evil Chef has taken off across the kingdom, wreaking havoc on the world as only evil chefs can do, and you’ve been tasked to travel in his footsteps and stop him. In each level, hoards of enemies, items, and even food products will be tossed up in front of you, and it’s your job to swipe on the screen and cut them all into tiny little pieces.

Anyone who has ever played Fruit Ninja before will immediately feel right at home here in KingHunt, and it will only take newcomers to the genre a few seconds to get accustomed to the game too, for that matter; all you have to do is swipe your finger on the screen to slice stuff up, and away you go! In addition to the addictive slicing gameplay, KingHunt also benefits from paying close attention to the smaller details, like the different aftereffects of the enemies and objects you’ll be chopping up: fruits will explode in delicious bouts of juice and seeds, while birds will burst in a giant cloud of feathers. But be careful though: there will also be plenty of bombs thrown into the mix, and later enemies can even slice back at you, which will deplete your health meter in a real hurry. 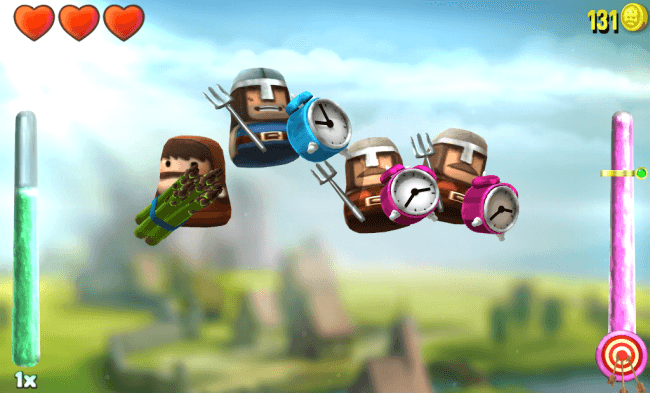 The graphics in KingHunt are just as much a highlight as the pitch-perfect gameplay and simple slicing controls. Everything you can slice in the game is positively bursting with color and flavor, from the mouthwatering 3D fruits, cakes, and veggies, to the adorable little villains and quirky boss fights (which are an insanely awesome touch, by the way). The different environments that you’ll move through are wonderfully vast and unique, and each one has their own respective enemies and items that adhere to its fun and refreshing theme: from deserts and swamplands, to snowy castles and caves, I was constantly surprised to see how many new and exciting levels continued to pop up on the vibrant world map during my pursuit of the ever-evasive Chef.

However, in KingHunt‘s quest to take the basic Fruit Ninja formula and expand it into a sweeping adventure that’s fit for the next generation of mobile gaming, a lot of different bells and whistles are thrown into the mix. Unfortunately, a lot of these extras are never explained to the player in the least bit. Sure there’s not much instruction needed for slicing everything that’s tossed up in front of you, but the game still assumes that you know a whole lot more than it ever cares to share upfront: like how combos are derived from slicing through multiple enemies or objects in a clean, single swipe. The overall lack of explanation in KingHunt wouldn’t have been so bad if there weren’t so many oddball design choices that cover the game’s foundation. 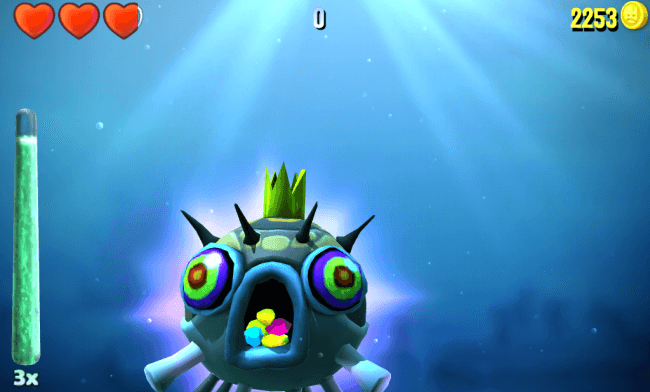 For instance, after finishing every level, a bunch of different colored gems become hidden around the game map. After some trial and error, you’ll ultimately discover that rubbing your finger across the map will cause the different land masses to ripple right under your touch, resulting in more of these colorful gems to turn up for the taking. Interesting enough, but it would then be another hour or two before I found out the actual purpose of these gems in the game: to access the bonus lighthouse stages that pop up periodically in the center of the map. It’s also very easy to accidentally enter into a level when you’re trying to scrounge up more gems in this manner.

These lighthouse stages are another big source of confusion as well. A new one will pop up every so often on the game map, where you’ll be treated to an extremely brief underwater stage that culminates in a quick boss battle with a giant blowfish creature that’s spewing gems out of its mouth. These stages and their boss fights are more or less identical every time you encounter them, and completing one will award you with a pixelated collectable like a goblet or a crown. Not only does the strange 8-bit nature of these 100 collectables sharply contrast from the stunning visuals seen everywhere else in the game, but they don’t really seem to serve any kind of purpose other than sitting in a display case of sorts. 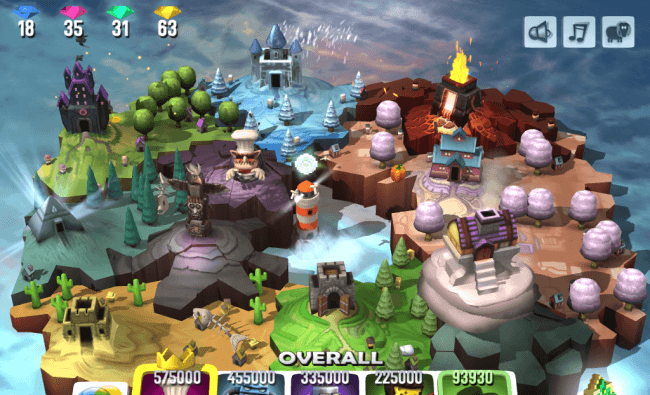 And finally, after you’ve hunted down the evil Chef and rid the kingdom of his tyranny once and for all in an epic battle that is easily one of the biggest highlights of the game, he simply just starts hopping all over the map again like nothing happened. You’ll then allegedly be tasked with going through the motions all over again, although this time the levels will have different objectives for you to work towards as you play, like scoring a set amount of coins before finishing off the boss. But once again, most of these bonus objectives are extremely vague and suffer from an overall lack of explanation (I still have no idea what the deal is with the objectives that put a static health meter on the side of your screen that seemingly has no bearing to your own health or the health of your enemies).

But despite all of its odd quirks and weird inclusions with no explanations, I still found myself coming back for more, time and time again. There’s just something that’s so inherently satisfying about this simple style of gameplay, and KingHunt‘s shining presentation works in perfect harmony with the intuitive slicing mechanics. In fact, it almost made me wish that the developers stuck to the basics more often, as there’s a reason why Fruit Ninja wasn’t such a complicated game: sometimes slicing stuff for the sake of slicing it is really all you need to have a good time.