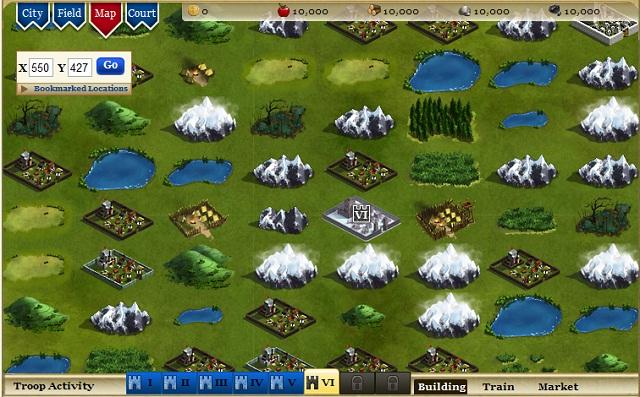 Build a frozen city of your own and meet the mysterious Fey in Kingdoms of Camelot’s latest expansion, the Winter Court.

Kingdoms of Camelot has lead the charge to bring deeper gameplay to games on Facebook. It’s effectively Kabam’s flagship game, despite featuring the sort of complex grand strategy that people associate with boxed retail games. The new Winter Court expansion adds new content for advanced players who’ve built up enough power and resources to found their sixth in-game city. Story-wise, the update introduces the “twilight of Camelot” story material from the legends, including characters like Morgan Le Fay and Mordred. Visually, the update introduces Kingdoms of Camelot’s first set of new building icons, to match the update’s wintery theme.

Beyond this, the Winter Court material doesn’t drastically change the feel of the game, merely expanding it so high-level players have more things to do. Building up your sixth city from scratch doesn’t feel dramatically different from building earlier cities. If you’ve made it far enough into Kingdoms of Camelot to be able to build your sixth city, though, chances are you aren’t going to find the process too repetitive. Kingdoms of Camelot is a game that rewards patience and diligence, in start contrast to the ten-minute time-wasters that otherwise appear to rule Facebook.

You unlock your sixth city in the same basic way you unlock all cities beginning with your third. You amass special King Arthur’s Crests and Fey Seals until you gain your sixth deed. You also gain a Fey Standard you can choose to fly (or not fly) in your Court. You can purchase some of the Crests and Seals you’ll need using the cash-based virtual currency Gems, or you can earn them by attacking unclaimed wilderness areas. Chances are you’ll have a sizable army at your disposal by this point in the game, so all it will demand is the sort of patience it takes to really get into Kingdoms of Camelot. 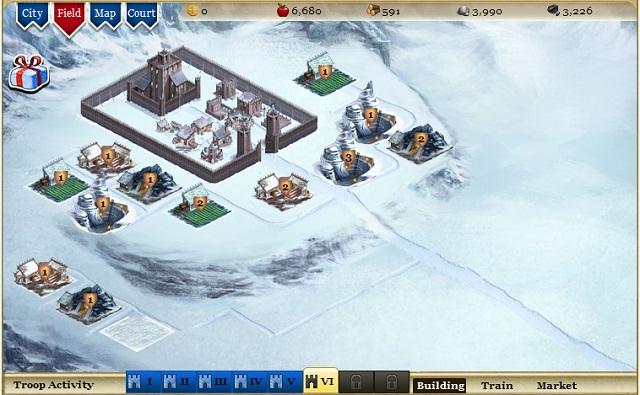 There’s nothing bad about the new expansion, perhaps beyond how long it will take a newer or more casual player to unlock it. The Winter Court content right now is very much a reward for veteran and more serious players who’ve had plenty of time to amass a lot of resources. Most games similar to Kingdoms of Camelot on Facebook move equally slowly, though, and you can spend Gems to speed up certain processes. You can’t spend Gems to simply speed through the entire game, though, as acquiring building resources like food, ore, wood, and stone simply takes time. 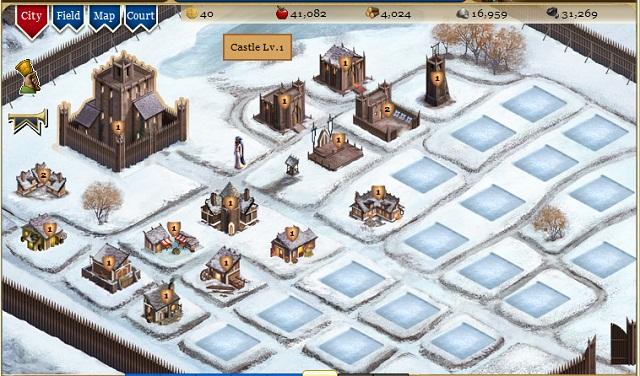 Kingdoms of Camelot is more immersive than most Facebook games, despite the simple graphics and heavily menu-driven gameplay, simply because it requires so much planning. Developing each of your cities demands equal care, as does building up an army and fortifying your defenses against other players. You can further amuse yourself with in-game chat and alliances that let several players work together. Kingdoms of Camelot is perhaps not the most social of the Facebook social games, but it offers solid strategy gameplay and good-quality production values that you may not find very often elsewhere.

Players create a complex world in Kingdoms of Camelot

I have played role playing and strategy games all my life and Kingdoms of Camelot for Facebook is as good if not better than many of the console games on the market. They have melded the tried and true formulas of several previous games to create a multilayered world that can be complicated for those expecting a standard castle sim.

King Arthur has just appointed the player as a Lord and has provided a modest kingdom to manage and build. While the game is heavy into player versus player combat, newbies are given a week long protection called the “Mist of Avalon,” so no other kingdoms can attack until the time is up or their castle reaches level 5, whichever comes first.

The game has an extensive tutorial in the form of various recommended quests that the player should undertake in order to get a stable beginning kingdom. The simulation and castle building aspect of the game is broken into three distinct layers.

The city is the world inside the walls of the city and houses the ruling castle, troop facilities, homes, markets and other areas not having to do with resource production or harvest. This is also where the player can change the tax rates, increase happiness through paying gold and collect gold from the people. Needless to say, grabbing gold will lower their overall happiness.

The field is the area just outside the castle walls and houses the farms, mines, saw mills and quarries. In order to build buildings and feed the troops, the kingdom must have resources and this is where these resources are collected. Here players train troops and build weapons for your city walls.

The third layer is the map where players can invade enemy camps, conquer woodlands and mountains to increase the amount of resources the player receives and find areas to develop new town and expand the kingdom.

While on the surface, this game seems overly complicated with its multiple layers and numerous buildings, each with a special purpose. The alchemist researches new technology, the knight’s hall allow friends to help manage your troops, the tavern increases happiness and homes give player’s the people necessary to complete all the jobs.

In reality, the quests tutorial basically tells you how to do everything. By the time the player has completed it, he will have an understanding of most everything and can concentrate on upgrading, growing and defending the kingdom.

While the Kingdoms of Camelot uses gold to purchase things like happiness, power-ups require the use of gems, which are primarily purchases using real world money. There are many power-ups that will allow players to have everything from increases attack and defense, increased production and increased gold. Player can also play Merlin’s Magical Boxes and choose a random chest and earn a prize such as resources, power-ups and gold.

The game is expansive, but flows easily and progresses at a good pace. Once you get past the giant tutorial quests, the players can focus on doing what they want such as conquering new areas, fighting other players and developing fun new technologies.

Kingdoms of Camelot is a fun game, but the tutorial is so long and drawn out that you can lose the feeling of building your own kingdom and instead feel like a glorified button pusher. You need to literally invest hours just to get your kingdom in a position to where you can go on your own way. While the tutorial quests are not mandatory, straying from the path will keep you in game limbo until you get back on the track.

Kingdoms of Camelot is a great game for those who like being deeply involved, but can be a lit boring if you don’t like being on a set plan. Overall, the game sets itself apart from many other games, but players have to decide if it’s good to be the king…or lord in this case.