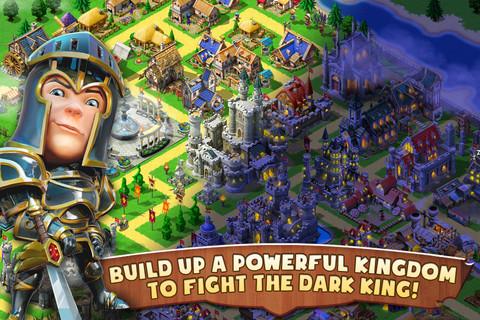 Gameloft has been riding the free-to-play game market like a medieval charger, and its latest offering, Kingdoms & Lords, is an interesting mix of strategy, simulation, and role-playing. There’s a strong and engaging game at the core of Kingdoms & Lords, but unfortunately Gameloft’s constant attempts to grab thy cash via in-app purchases sullies the experience like the stink of a drunk ogre.

You play through Kingdoms & Lords as the young leader of a hamlet. Though your realm has been largely untouched by the rest of the world’s wars, that’s all changing. A new conflict is boiling between the realm’s kingdoms, and worse, an ancient evil has decided he’s ready to rise and throw his shadow across the world. Your town is woefully unprepared for combat, and it’s your job to change that.

Most of your time in Kingdoms & Lords is spent in the game’s simulation mode. You need to turn your backwater into a fortified kingdom, which means building houses to increase your population, farms for income, libraries, stables, and barracks. Stables and barracks are used to train mounted soldiers and footmen, which are necessary to access the combat portion of the game.

The battles in Kingdoms & Lords is arguably the most attractive part of the experience. Some of the soldiers you can train are swordsmen, axe men, and spearmen, and each warrior has a weakness against a certain weapon (think of the weapon triangle in the Fire Emblem games). The fights are turn-based, and you can use magic (purchasable with premium currency) in addition to weapons.

Neither the fights nor the simulation portion of Kingdoms & Lords is overly original: There’s little here that you haven’t played in an old Super Nintendo game. The two gameplay styles still complement each other well, though, and riding off to battle is a nice change when you’ve had enough of tending to your townspeople. 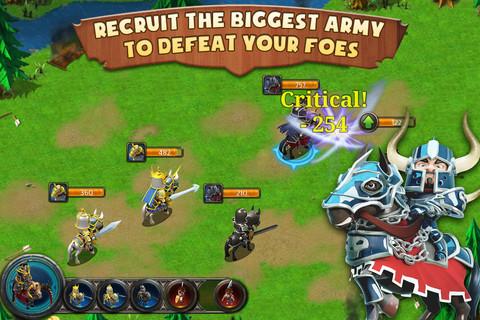 Unfortunately, the pacing in Kingdoms & Lords lurches and balks like a hobbled donkey. Every task requires energy to perform, and you don’t have a whole lot of the stuff to use—unless you want to pay for it, of course. Harvesting crops takes energy. Building takes energy. Battles take a lot of energy. You can expect to play for maybe ten minutes before you run dry.

Moreover, Kingdoms & Lords wants premium currency (in this case, diamonds) out of you at every turn. Recruiting your conquered enemies costs diamonds, as does gaining access to spells on the battlefield. There are even seemingly simple quests that can only be finished if you buy designated items with diamonds.

What’s really a shame is that Kingdoms & Lords would be an easy recommendation if it was a complete game with a $4.99 price tag. The genre mash-up makes for a playful and memorable game. If you have the patience to endure long waits and panhandling for diamonds, go ahead and pick this one up. Otherwise, leave it in the Dark Ages.