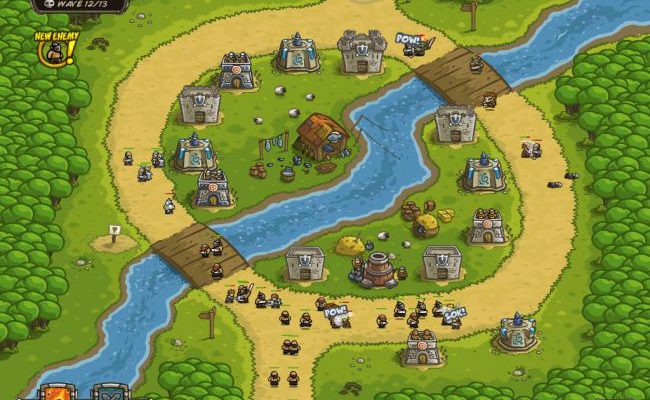 I’ve reached the point where I tend to groan when a new tower defense game comes out for iOS devices. There are so many of these games —and so many of them feel identical to one another— that they kind of blur together after a while. That’s why I was so surprised this week when I started playing Kingdom Rush, a game that I found myself playing for hours at a time.

Kingdom Rush takes place in a fantasy world where you are the commander of His Majesty King Denas’s forces. At first, you have to put a stop to the outlaw raids at the town of Southport, but you quickly find yourself working to thwart an invasion of orcs, goblins, and other sorts of evil beasties. 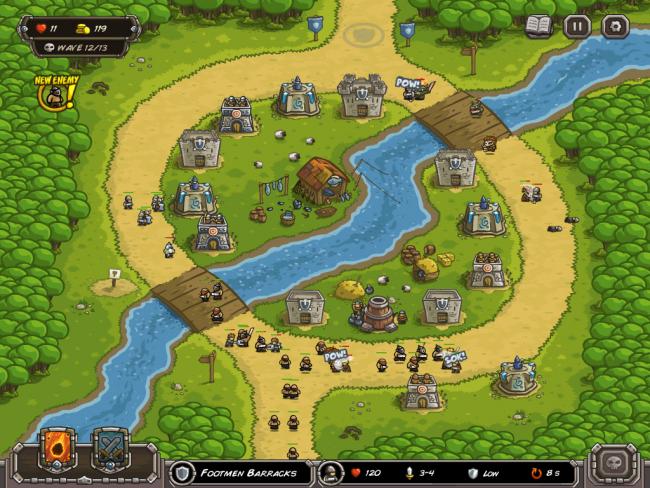 One of the first things you’re likely to notice in the game is just how great its presentation is. The top-down graphics have a hand-drawn look to them. Levels sport unique designs that never feel even remotely repetitive, while towers and characters are bright and cartoon-like, sporting lots of detail and fluid movement. There’s also a great soundtrack, and your units will often throw out goofy little one-liners that sound surprisingly great.

The second thing you’ll undoubtedly notice is just how much fun Kingdom Rush is. There are the basic tower defense gameplay elements here, like where you build towers at pre-ordained spots and then upgrade them. You’ll have four different tower types (archers, fighters, mages, and cannons) to choose from; once you’ve leveled them up past a certain point, you can start choosing what types of towers they’ll evolve into and exactly what powers/abilities they’ll grant to their units. Within a few levels, the game lets you pretty much set up formations that fit how you want to play.

But there are also some RTS and RPG elements here, too. When you clear a level, you can earn up to three stars which can then be spent on bonuses for your various units and spells. The RTS-like features come from the ability to cast spells and summon backup units. There’s only one spell available, which is a controlled meteor strike, but it’s incredibly useful if you have a group of enemies clustered in an area (as they tend to be when they get caught in a melee brouhaha). The backup forces are small groups of conscripted soldiers who start out as farmers and gradually become more powerful as you spend your stars. While they’re not exactly the best fighters, these backup units can distract some invaders as your other towers engage in armed crowd control. 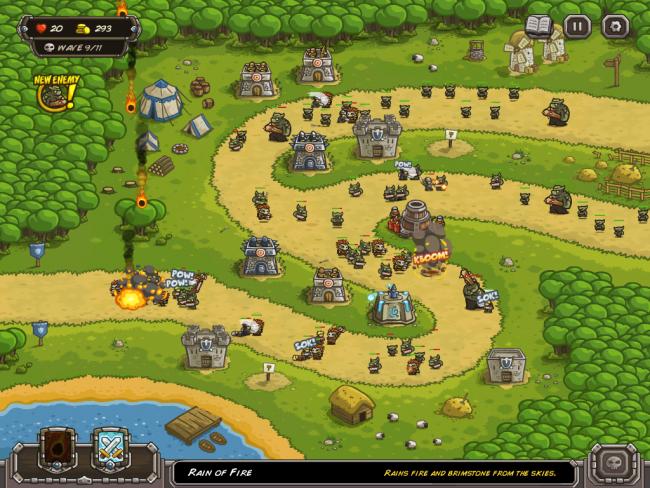 Unlike your magic, the backup units can be summoned about once every ten seconds, and cost nothing to bring onto the battlefield. As a result, you’ll find yourself dropping these little guys around the map in order to give your regular units some breathing room. It’s a lot of fun, since the strategy surrounding your backup’s positioning can make or break your success on the battlefield.

Even though the game is great, there are a couple of shortcomings, minor though they may be. Unlike most tower defense titles, there’s no fast-forward option here to speed things along — meaning that the slow pace of your enemies can sometimes feel a bit maddening. Also, there doesn’t seem to be any integration with Apple’s Game Center; instead, there are only in-game achievements to be unlocked. That really isn’t a big deal, but it does seem like an odd design choice.

Kingdom Rush deserves a lot of goodwill, simply because it’s able to make tower defense gameplay feel fresh and fun. In addition to the deep, challenging gameplay, the game’s production values are simply outstanding. This is easily one of the best tower defense games currently in the App Store. Check it out; you won’t be sorry.