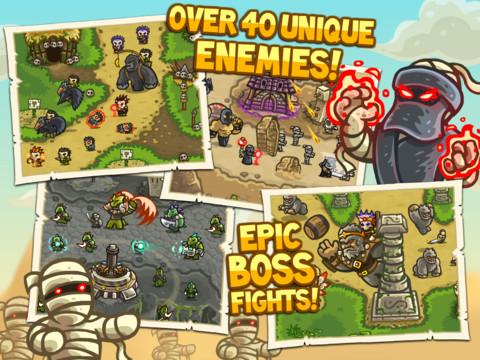 Rushing on to the great frontier.

Hopefully, you’ve been able to pull yourself away from your favorite tower defense game for a minute or two in the last few weeks, to know that Kingdom Rush is back with a brand new sequel called Kingdom Rush: Frontiers, which brings us more of the same fantastic tower defense gameplay, while throwing in some new ideas as well along the way. So pick your hero, choose your towers wisely, and get ready to defend against all of the frontier’s fiercest foes, in another excellent installment of this quickly growing franchise.

In case you’ve somehow never played the first Kingdom Rush game before, Frontiers wastes no time in bringing players up to speed on the simple and high-speed tower defense gameplay, and proves to be incredibly accessible to everyone, even as a sequel. The sharp, cartoony graphics are just as bright and vibrant as ever, and the new desert and jungle environments which populate the majority of the game are a breath of fresh air from the grassy fields and snowy plains that dominated the first game. The enemies who try to evade your defenses are just as fun and engaging, from vicious Sand Hounds who dart past your defenders in the blink of an eye, to gorillas who are willed along by a banana hanging over their heads on a string.

The attention to detail in the game is simply astounding, but all of the tiny characters are so miniscule on the actual game screen, that it almost makes me wish there was some sort of zoom feature, which I could use to make my hero bigger, or appreciate the action from a more “up close and personal” perspective. A few times I found myself subconsciously trying to pan the camera in this regard to no avail, and while you will be able to see everything on the field that you need to in this one stationary view, I couldn’t help but feel a little restricted in the total and overall control of my surroundings.

Kingdom Rush: Frontiers brings with it four basic tower types, like the Archer Tower and the Dwarven Bombard, with more advanced tower types unlocked the further you progress. But unlike most passive tower defense games, Frontiers actually lets you get your hands dirty and assist in these battles yourself, by controlling a single hero on the game screen and telling him or her where to go, and who to fight next. The touchscreen controls are always incredibly simple, and it becomes such a breeze keeping track of everything on your plate, that technical aspects such as these become fully absorbed by the experience, and you almost forget they exist after a while. 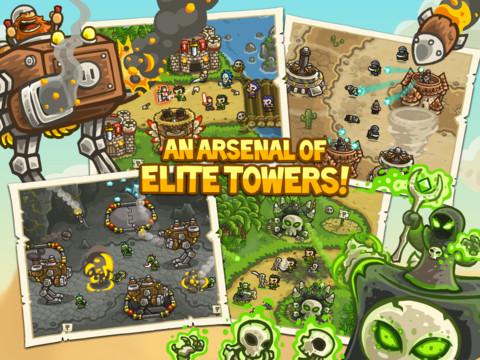 There’s actually an incredibly deep upgrade system ingrained in the game, which lets you spend stars you’ve earned through gameplay to personally enhance your TD aspects, like improving the range of your Archer Towers, or producing more resilient soldiers from your Barracks. You’ll also unlock new additional abilities as you conquer more stages, like upgrading your towers to more powerful tiers, and a special “emergency” attack that rains flaming boulders onto an area of your choosing, after a lengthy cool down period.

Because of this careful setup, it becomes great fun returning to previous stages and earning those three-star completions, now that you’re much more powerful than you were when you first played the stages before. In addition to the game’s initial 25 stages that take you everywhere from the Dunes of Despair in the Azsare Desert, to the Temple of Ethereal Evil near the Emberspike Mountain, every TD stage in Frontiers comes with two bonus challenges that are unlocked upon a 3-star completion and boost the overall replay value by tenfold (the Heroic and Iron Challenge, respectively, which introduce much stronger enemies and place some additional limits or restrictions on your strategy). 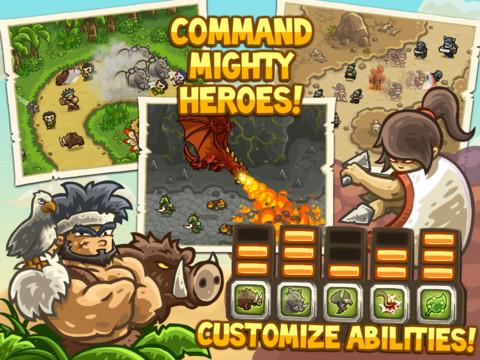 One of the biggest drawing points to Kingdom Rush: Frontiers is a whole new roster of awesome heroes that you’ll be able to control during battle, and level-up with new powers and deadly abilities. All players will start off the game as the swordmaster hero Alric, before unlocking Mirage and Cronan through regular game progression. However, there are six other characters in the game available, and these are decidedly the cooler of the choices, like the swashbuckling Captain Blackthorne, the stone-faced golem Grawl, and the fire-breathing red dragon Ashbite. It’s a shame that there’s no other way to obtain these characters other than hard in-app purchases, as these can get pretty pricy, and range anywhere from $2.99 to $6.99. I can understand their higher stats would render a clear advantage in some of the earlier levels of your quest, but unlocking Ashbite costs more than the actual purchase of the HD version of the game!

But in the end, what it all boils down to is if you loved the first Kingdom Rush game, then the odds are you’re probably going to find a lot here to love in this impressive sequel; and even if you’re new to the world of Kingdom Rush, well then there’s probably still a lot you’re going to love as well. So the characters may be a tad bit too small, and so some of the more impressive heroes are pretty expensive to buy; these complaints are easily dwarfed by the impeccable tower defense gameplay, the vibrant and lively cartoon visuals, and the deep and lengthy campaign that all make Kingdom Rush: Frontiers a serious force to be reckoned with on the App Store today.