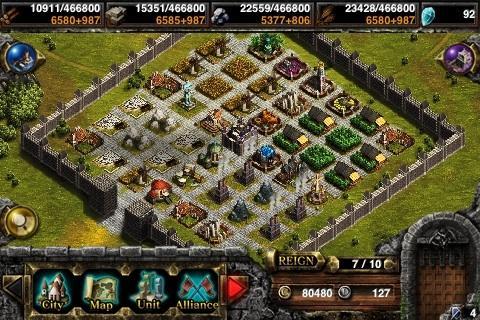 Kingdom Conquest bites off more styles of gameplay than it can chew.

Amassing a giant army of monsters and taking control of a fantasy realm sounds exciting in theory, but in Kingdom Conquest it’s actually rather dull. A unique mix of an MMO, strategy game, city building sim, and dungeon crawling RPG, Kingdom Conquest somehow manages to be both complex and shallow at the same time.

In the land of Magna Gul, monsters have taken over the land and colossal towers dot the landscape. To make matters worse, the previous ruler of the land has mysteriously disappeared, leaving his throne open. This has led to an influx of adventurers looking to claim the kingdom as their own. And that’s where you come in. You play as a budding king looking to take over Magna Gul, but of course you’ll have to deal with not only monsters but other aspiring adventurers as well.

You can choose from three different classes of character, but there is no character customization at all. Aside from the name, your character is pre-made and there isn’t even a female option. From that point there’s a lot you can do. You’ll have control over your own city where you can erect structures that can produce resources and train monsters. Resources are used to continue to upgrade your city, while monsters can be dispatched in groups to take over neighboring plots of land, allowing you to expand your empire. Like in many Facebook games, every action has a time limit attached to it. Building and upgrading structures takes a few minutes, as does sending monsters off to conquer lands.

You’re also able to go dungeon crawling, tackling various towers and clearing them of monsters. This amounts to some fairly simple hack ‘n slash combat. Each tower is made up of multiple floors, with each floor consisting of a single room filled with monsters. Once you clear one floor you’ll move onto the next, and eventually you’ll make your way to a powerful boss. These battles can be tough, but thankfully the game lets you team up with other players online. For some of the tougher battles this is pretty much a necessity. 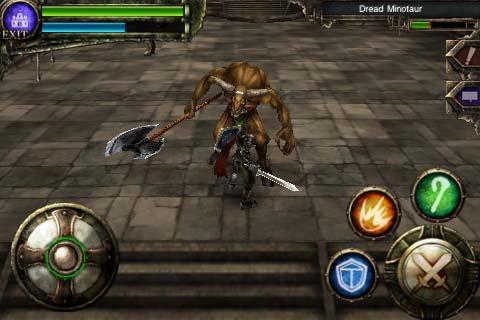 As an RPG, a big part of the experience comes from levelling up your empire. You can level up your monsters units, your buildings and city, and, of course, your character. There’s also a ghoulish skeleton character who will give out quests to keep you on track. It sounds like a lot to keep track of, but once you come to grips with how everything works it can actually get a little boring. Upgrading your city and conquering neighboring lands takes no real skill – you simply pick what you want to do and then wait. Likewise, while challenging at times, the combat is pretty basic and can be boiled down to simple button mashing.

Still, it’s definitely satisfying to watch your empire flourish, even if the process of doing so can be a little dull. Kingdom Conquest attempts to merge a number of different genres into a single game, and as a result no aspect of the game feels deep enough to be truly satisfying. It can be a fun diversion for a few minutes a day, but it’s far from being a truly engaging strategy game.