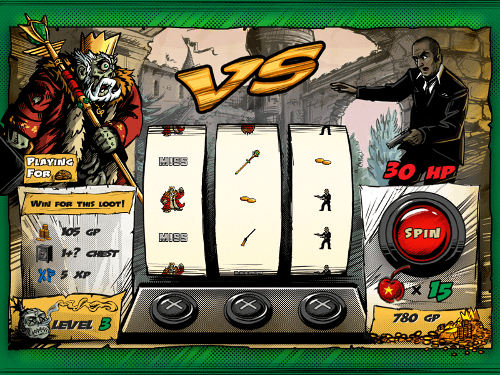 Who said slots and RPGs can’t be friends?

Video game sequels can be tricky business, as the folks who made Duke Nukem Forever can explain ad nauseam. They’re somewhat easier when the original game is good but not mind-blowing, which is why King Cashing 2 feels so fresh. The marriage between slots and RPG elements is intact, but Productions Multimage layered on more strategy and more zany fun to create an unusual but entertaining mobile experience.

King Cashing 2 drops you right into the story, unveiling it through a series of interactive comic book pages. You read a few panels, then tap a button to enter combat. As for a plot summary… look, I’ll be honest. I have no idea exactly what’s going on. Your character is an undead king who comes to possess a device that can bring other dead folks back to life. Instead of hungering for human flesh, this king seems to be content just restoring his former wealth, but those pesky humans keep getting in his way.  So I think the zombies are the good guys and the living are the bad guys, but the real story here is that there’s a story at all.

Battles play out on the slot machine in similar fashion to the original game. Characters in your party appear on the first reel, weapons on the second and enemies on the third. The object is to stop the reels (either all at once or individually) so that your party members and/or weapons line up with your opponents. Every time they do, they’ll inflict damage, with critical hits administered if the right character and weapon are on the same line. Each spin costs you three cherries, and your job is to reduce the enemy to zero hit points before you run out of cherries.

Six different categories of weapons and characters (humans, robots, potions, animals(!), guns and melee weapons) add some extra wrinkles to the mix, as enemies may have resistances or immunities to some of them. They can also have weaknesses, making it a good idea to acquire a varied mix of helper zombies and gear so you can swap in and out as needed. Defeated baddies sometimes drop loot-bearing safes, and there are stores every so often where you can buy and sell gear. The same gold used to buy stuff is also needed to start every battle, so you’ll find yourself weighing how to spend your dough fairly often.

Leveling up allows you to boost the capabilities of one of your zombies, increase your starting number of cherries or bump up the chances of activating special powers or finding loot. Advancement feels a little slow, and you may have to go back and grind a bit to move forward again. The gold, silver and bronze medals for how quickly you beat each battle return from the first game, but this time there are secret stages that only unlock when certain medal-winning conditions are met.

If you’ve made it this far into the review and are convinced that the game is somewhat tongue-in-cheek, then congrats: you should definitely trust your instincts. The art and audio work together to keep the tone light, and even the gory zombie bits are primarily played for laughs. The human villains are mostly humorous stereotypes too. 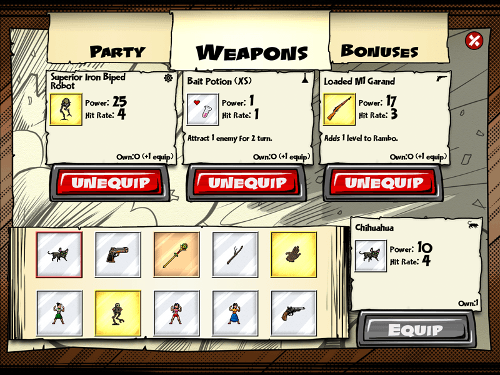 One drawback of King Cashing 2 is that it’s fairly short. I was able to knock out two of the three volumes in less than two hours, though the difficulty definitely ramps up the further you go. A fourth volume is marked as “Coming Soon,” but unless you are one of those masochistic completists who needs all gold medals, this is a game that feels more fling than long term romance.

Even so, this is a sequel that improves upon its predecessor in multiple ways, and it’s hard to ask for or expect more than that. With its strangely compelling mix of skill, luck and strategy, King Cashing 2 is a second trip worth taking. Dare we hope it becomes a trilogy?