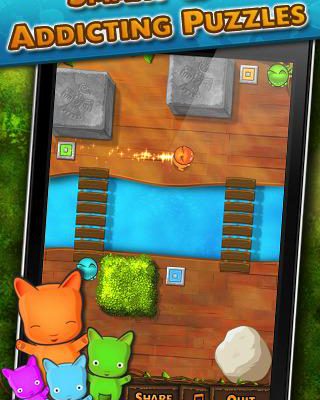 Kiko only had one job to do: guard the Last Totem of the Gods. It was a sweet gig, on a pretty island in the middle of the tropics, and the idol actually provided a protective field around the Kiko’s home. Unfortunately, the cartoony cat creature let the item get stolen on his watch, which means it’s now up to him to find and reassemble the missing pieces of the totem, ASAP. So begins Kiko: The Last Totem.

There isn’t much more of a plot for gamers to enjoy, but the challenging gameplay manages to make up for the lack of narrative. The game is a rather unique puzzle title, requiring you to slide various versions of Kiko across the screen until you can get him to rest on a target. Levels can contain up to four Kikos (orange, blue, green, and purple), and you have to get each color onto a corresponding target.

This is easier said than done. Kiko will slide all the way across the screen until he hits an immovable object. And since the targets do not have any stopping power, Kiko will sail right over them unless they’ve got an object just past them. There’s no way to dynamically stop Kiko as he moves. Instead, you’ll need to either strategically direct the little guy at other objects on the map, or even place other Kikos in his path. 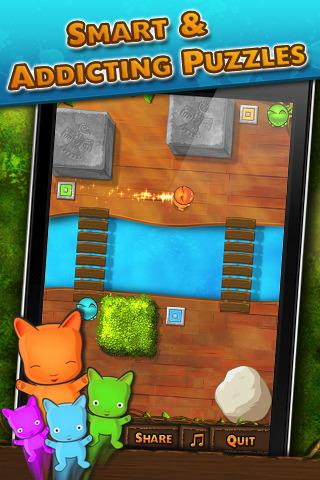 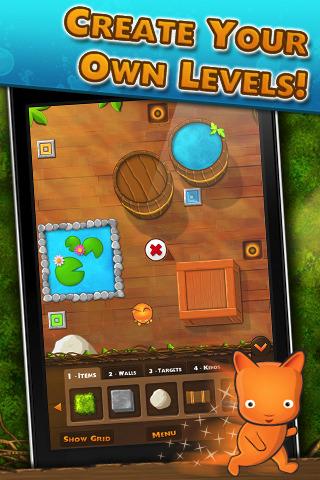 There are three different difficulty modes, each sporting 50 maps apiece. While none of the maps should take you more than a few minutes to solve, there’s a lot of content here, and it’ll take you well over a dozen hours to beat the included maps.

Even the Easy maps are challenging. Kiko’s constant impression of butter on a Teflon-coated skillet often proves maddening. This is especially true on later levels where you’ll realize that you’re better off just restarting because you needed to move the various Kikos around in a specific order if you want to solve the puzzle effectively. When you beat a level, your performance is evaluated with a star rating, based on how many moves you made.

Now, at some point, most gamers will probably encounter a level and think “I could have created something better than this.” Kiko: The Last Totem gives you the ability to put your money where your mouth is and create your own puzzle maps.

From the moment you fire up the title, you have the ability to create your own levels using any item that can be found in the main campaign. Even better, the level editor won’t let you create a map that doesn’t actually work: a message will appear if you’re missing critical items or have placed more specialized objects than you’re allowed to. After you finish a level, you’ll also be given the option to play through it and see how well it works.

While the level editor itself is great, the best part about the feature is that you can share custom maps with your friends. I could totally see my friends and I trying to one-up each other with increasingly-devious maps, so hopefully a few of them will pick the game up in the near future.

Kiko: The Last Totem is a competently-made, challenging little puzzle game. It’s definitely worth checking out, especially if you can find some other players to exchange levels with.