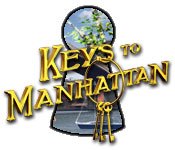 Emily – a young artist who wants to make her dreams come true – returns to her abandoned childhood home in New York City to search for her missing uncle. Instead of finding him, she discovers many keys, clues and a rundown townhome in the hidden object game Keys to Manhattan.

The keys in Uncle Stanley’s home lead Emily to his office and 12 other places around New York where she hunts for clues leading to money. She uses the money to clean up and redecorate her uncle’s home. As she buys furniture and cleans the space, she reflects on her childhood memories and her relationship with her uncle to tell the story. Story vignettes appear after you finish a scene or pick up a new set of keys.

Emily visits the different rooms of the townhome where she finds keys to open Stanley’s other buildings to hunt down three items at a time for up to 20 items per scene. The game lists three objects you need to find. It lets you see a picture version of the item. Once you find one object, another appears until you clear the list. Lest you think this makes the game too easy, it doesn’t. For one, many objects appear behind other items.

Instead of the objects having some part of the item peering for you to find, you move your mouse until an item pops out. While this sounds unique, it can have a dizzying effect and makes the game feel like it moves at a mouse’s pace. You’ll move your mouse around carefully to look for pop ups in hopes it matches one of the three items currently in your list. Sometimes several objects are so close together or obscure, they’ll never pop up unless you take teeny steps with your mouse pointer. When you tire of looking, you can grab a hint to get a break, but you need to wait between hints until the meter refills.

The only change of pace you get comes after you find all scene’s items. Somewhere in the scene, something will open to reveal treasure that contains more money to use in fixing up Uncle Stanley’s house.

When you return to the house, new furniture or some other house décor greets you along with a flashback or thoughts from Emily. All you need to do is turn around the furniture to fit where it belongs and put it down in the active room. Each room in Keys to Manhattan has a handful of hidden object scenes where you’ll find the hidden treasure to buy things for that room. Once you find all the keys for that room, you’ll move to another room.

The decorating lays the groundwork for a good idea, but doesn’t have much going for it. The only game in it is putting it in the right place. You could say it’s like a doll house where you can only do one thing: put it down. There’s no playing or interacting with the house.

The game gives you a set amount of time per scene with the time shrinking as you progress. Those who don’t like timers won’t feel zen-like in Keys in Manhattan as it has no stress-free or time-free mode. The game turns more stressful in the later levels with crowded scenes and less time to find objects.

New York has a distinctive look about it that shouldn’t be hard to capture in the game. Although we visit a theater, office, park and other typical New York spots, Keys to Manhattan fails to emanate New York.

Experienced hidden object fans complain that the items are too easy to find in many games. Keys to Manhattan will challenge them with objects completely hidden. It doesn’t help that lots of the items appear and reappear in the 13 scenes spread over many levels. The hunting, mousing around and tracking down of items feels like a heavy-burden especially on the eyes. Steady hands instead of sharp eyes will prevail in this game.