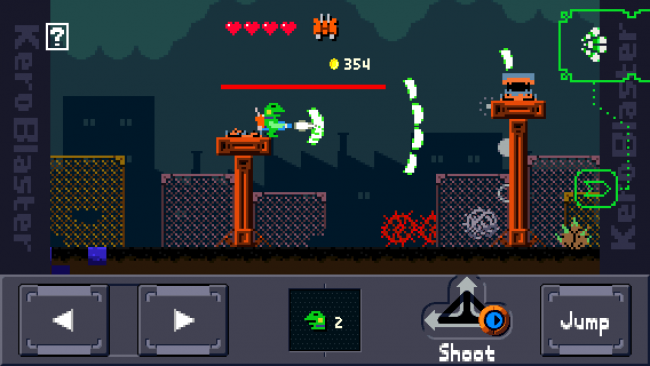 KeroBlaster is a side-scrolling action game designed by Daisuke “Pixel” Amaya – the man behind the action indie hit Cave Story. Though it’s ten years old, Cave Story is still widely regarded as one of the greatest action games of all time. Concocting a worthy follow-up act couldn’t have been an easy task for Amaya, and it probably explains why KeroBlaster has been subject to delays.

Happily, KeroBlaster is worth the wait. Though it aesthetically resembles Cave Story, KeroBlaster is unmistakably its own adventure thanks to an emphasis on shooting (tons of it) and jumping instead of exploration.

Best of all, the action is driven by what’s arguably the most responsive control scheme for a mobile game yet. It’s not quite perfect, but it’s darn near close.

KeroBlaster puts you in control of a little green frog that’s a “custodial scientist” – a fancy way of saying “a janitor with a gun.” The frog works for the Cat and Frog Company: an industry that builds and maintains teleporters. Fuzzy black creatures have begun swarming the tech, so Froggie needs to pack his weapons, travel across several levels, and rid them of the black things as well as other pests.

Whereas Cave Story is all about scaling high peaks, low depths, and backtracking to pick up missed power-ups and advance the story, KeroBlaster is much more linear – more Super Mario Bros than Super Metroid. You advance from left to right, blasting everything that gets in your way. You gain awesome upgradable weapons when you beat a stage boss, and then you advance to the next level.

KeroBlaster‘s linearity makes it pretty short. The whole thing can be polished off in a few hours, though things admittedly get challenging towards the end of the journey (and losing all your lives sends you back to the start of a level, though you get to keep your collected coins and upgrades). 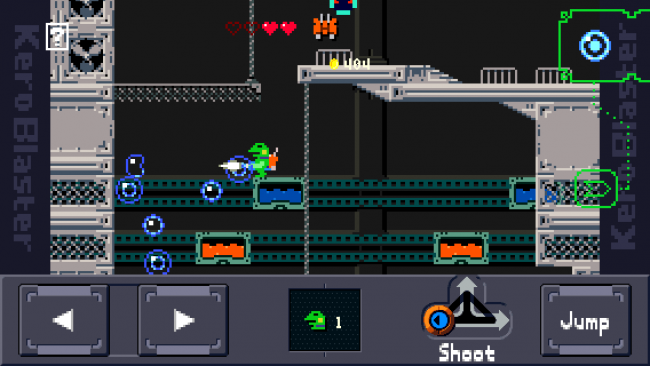 Don’t dread the heavy action in the last few levels though. KeroBlaster is a rare example of a mobile game that controls beautifully. There are two large buttons for moving left and right, and a single large jump button. Firing your weapon is done by locking it in the desired position, so you’re free to concentrate on maneuvering around the landscape. When you die, you have no-one but yourself to blame, though the jetpack accessory does take some getting used to.

KeroBlaster‘s chiptune soundtrack is likewise smooth, though there isn’t anything in there that sticks to you like “Gestation”or “Moonsong” from Cave Story. Nevertheless, the game is definitely worth a go with headphones plugged in.

KeroBlaster‘s compelling retro-style graphics, sharp controls, intense shooting action, and charming character designs make it one of the best action games on mobile. It’s not Cave Story, but it doesn’t try to be, and it succeeds regardless. That speaks well for Amaya’s talent as a game developer.