“It’s too late to love you now”

We’ve been driving back country roads of rural Kentucky for over a year now, although it’s only been one night in-game.  What started as the final delivery of antiques truck driver Conway and his straw-hatted dog, Blue (or Homer), has turned into a circular expedition for an ever-growing group of nomads with nowhere preferable to go.

Shannon Marquez remains determined to see Conway to his destination after her mysteriously vanished cousin Weaver led them to each other.  Young Ezra and his gigantic eagle companion, Julian, have joined up with the trio when they’re not transporting cabins between the forest and museum.  And shortly into Act III, two new additions appear, rounding out the group to seven souls in search of Dogwood Drive off the Zero. 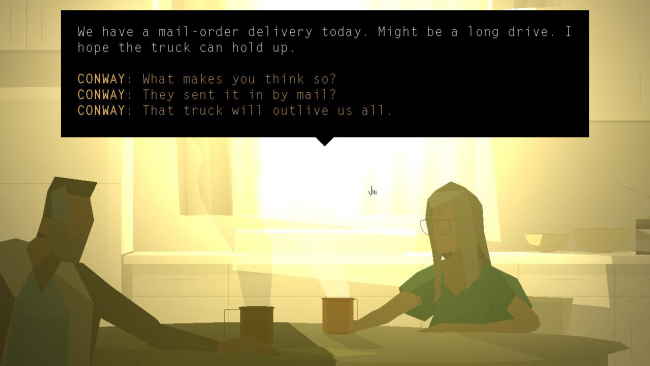 Like Act II‘s interim chapter Limits & Demonstrations before, developer Cardboard Computer provided fans with a free, short lead-in to Act III with The Entertainment.  Arranged as an amateur play written by Lem Doolittle and set by the now-recognizable Lula Chamberlain, The Entertainmentis the perfect appetizer to what Act III will offer players.  It’s flooded with dialogue and new characters who pour their mundane woes into the bottom of a whiskey glass.  Much like Conway’s simple desire to make his final delivery, the barflies of this pre-chapter have modest dreams: a poolside vacation, a faithful husband, an honest living.  It’s only in brief snippets describing the “strange boys from Hard Times” Whiskey that we are reminded of the surreal world Kentucky Route Zero is set within, and the reality of what awaits these characters outside their seemingly average troubles.

Act III is focused on most of the themes presented in The Entertainment, from the simple, unglamorous dreams of the average Joe to the past—and unpaid debts—catching up to you.  There’s a recurring thread of unachieved goals and split paths that led to unplanned outcomes, which opens up our characters and sharpens their previously fuzzy motivations. 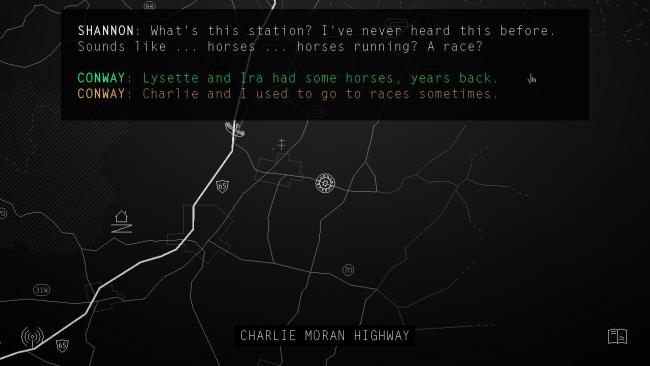 While all of these themes are embodied through one-off characters and locations you may or may not meet while traveling, they’re also explored through much more detailed and revealing dialogue between our party members themselves.  Previous Acts hinted at Conway and Shannon’s pasts, but Act III is much more transparent in its storytelling, regardless of the choices you make.  Shannon is extremely forthcoming with personal details, and Conway frequently reminisces on his time with Lysette, as well as the man he used to be.  This exposition is interesting and beautifully written as we’ve come to expect from Kentucky Route Zero, but it’s also too readily supplied in a series wrapped in surrealism and mystery.

It almost feels like Act III is the end of “Part 1,” and Cardboard Computer wanted to tie up loose ends before moving in a new direction.  This is true in our travels throughout this Act, as well.  A handful of locations from previous entries are revisited, including Equus Oils, the Bureau of Reclaimed Spaces, and the Zero itself.  There are new sets introduced, but none have quite the punch or surreal appeal of the other Acts, save one exception.  Most of the effort of Act III has gone into the dialogue and detailed histories we are filled in on, which leaves us with a lot fewer scenes like Act I‘s TV screen barn, or Act II‘s third floor: bears.

Some of these surprising locations still exist—like the Rust Archives, which specializes in the cataloguing of rust—but they’re mostly presented in the text-only format of drive-by destinations.  Even most of these map points prioritize character descriptions and backstories over setting, providing more detail on a woman fighting for public transportation than a petting zoo located in the middle of nowhere, which is simply “closed.”

As always, enjoyment of Kentucky Route Zero depends on what you want and expect to get out of it.  Act III clearly favors characters over setting, and players wishing for more of the former should be sated for a long time to come.  With four distinct voices available in most dialogue trees, there’s an even greater value in replaying and examining the variety of characters we’ve been introduced to.  Those of us who most enjoyed the exploration of surreal and uncanny locations scattered around this world have less to chew on, but should still walk away full.