Have you seen our grotesques?

The Zero: the mysterious interstate in central Kentucky that everyone seems to know about, but no one completely understands.  Act I of Kentucky Route Zero introduced our protagonist, Conway, to the existence of the Zero and set him on a persistent path to find it.  Act II follows up on Conway’s discoveries and experiences as he continues trucking about the surrealistic backwoods in an attempt to make his final delivery of the night.

Kentucky Route Zero takes place in an inexplicably strange, yet empathetically acceptable magical realist world.  While Act Iintroduced us to this setting within a suspenseful shell—beginning with a car crash, a dank basement, and an abandoned mineshaft—Act II scales back this ghostly atmosphere to focus on the surreal.  The majority of locations in Act II refer to reclaimed spaces, buildings whose purposes have been remapped and are no longer what they seem.  Even the Zero itself—which has many purposes simultaneously—makes an admittedly eerie, yet nonchalant appearance; Conway and company have become accustomed to the strange habits of this region, including “driving” the Zero.

Although the atmosphere of Act II has shifted, free exploration and character interaction are still the dominant gameplay mechanics.  Kentucky Route Zero‘s classification as a point-and-click adventure remains tenuous at best, and Act II further confirms this with even fewer “puzzles” than its preceding chapter.  The Zero is something of a puzzle, but successfully navigating it results in additional blocks of interactive fiction, the predominant method of narrative throughout the game.  There are even more discoverable side stories available in Act II, and each one adds a snapshot to the unnamed photo album that is filling up before us.

While Act II introduces us to new locations and characters that are arguably the most interesting yet, it successfully maintains the mysteries and events from Act I.  Weaver continues to come up in conversations unexpectedly, Conway’s single-minded need to make this delivery is questioned, and even Lula Chamberlain—whom dedicated fans will recognize as the artist from Limits & Demonstrations—makes a critical appearance.  Much of Act II is a forced detour caused by Conway’s injury—also from the previous installment.

This injury causes a change of direction for Conway and Shannon’s journey, but also highlights one change for the worse in Act II: the tediousness of travelling.  Although Kentucky Route Zero is absolutely not a game to be rushed through, the majority of movement in Act II is slowed by Conway’s injury or simply overly convoluted in other instances.  This difficult method of travel is fitting and atmospheric at first, then frustrating and tiresome, ultimately discouraging exploration in a game that relies on exactly that. 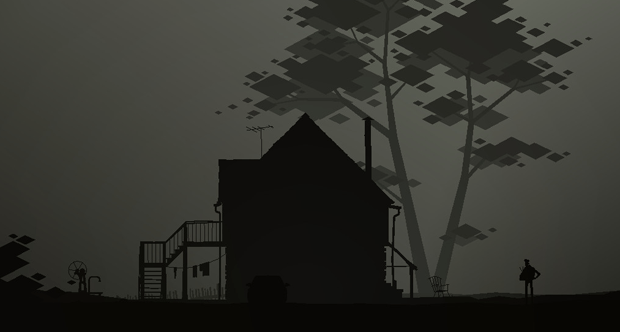 And you will want to explore every aspect of Act II.  Once Conway drags himself to a destination, you’ll be treated to any one of the following: literally endless bureaucratic roundabouts, an office with a humorously shocking third floor, an unexpectedly serene storage space, and a museum with a very unique exhibit.  Every other detail in between, whether it’s stopovers from the “Bureau of Secret Tourism” or easily overlooked rooftop neighbors, are surprising but strangely fitting hot spots that help flesh out this surreal rural setting.  Going into any greater detail would ruin the dreamlike discovery of the game, but the bizarre tone and method of storytelling is so consistent throughout the first two parts of Kentucky Route Zero that by the end of Act II the world almost begins to make sense…almost.

Whether you’re on board with this surrealistic experience or turned off by its esoteric nature, Act II has confirmed a consistency in Kentucky Route Zero‘s narrative, setting, and tone that we can only expect to continue throughout the next three installments.  Now it’s just a matter of finding the off ramp and waiting for the next detour to appear.