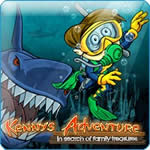 Let’s get philosophical for a sec. If a game is far too easy for an adult, does that mean the developer probably had a younger audience in mind? Or is it just a game that’s not challenging enough?

That’s the question regarding Kenny’s Adventure: In Search Of Family Treasures, a breath of fresh air for lovers of Mario-like platform games. In each of 62 gorgeous undersea levels, gamers swim, walk, and bounce young Kenny through hazards galore in order to pick up a varying number of treasures. When he’s accumulated the specified amount, he’s off to the next level for more of the same.

It may sound like quite the challenge: By the end of the game, a dozen varieties of dangers — from electric rays and big sharks to fuel barrels and underwater mines — have made their presence known. You’ll need to avoid them all and move quickly enough before your scuba tank runs out of air. And if you run out of rocks, you’ll have no ammo left to hurl at the predators. Phew! Can one possibly survive throughout all this?

Uhhhh, yes. And, in the first half of the game, without too much effort. There are far too many “extra lives” and additional ammo lying around, and most of the baddies can be taken out quite easily (except for the sea snakes and dripping goop which seem indestructible). If we said we got through all 62 levels, would you be impressed? Gee, thanks … but don’t be.

Getting back to our philosophical question, we’ll give the developers the benefit of the doubt and proclaim this a great game for pre-teen treasure hunters. For they are the ones who are most likely to find Kenny’s quest a challenging one. And won’t mind the fact that there seems to be a sameness to all the levels — the underwater landscape is fraught with dangers, except each level has the same dangers, just in different locations. Around level 20, more experienced gamers will suddenly find they need to concentrate a bit more than previously only because the numbers of dangers seem to have notched up a bit.

Perhaps the biggest challenge, unfortunately, was that occasionally — not too often but now and then — Kenny stubbornly chose to swim in one direction even though the balky controls were directing him in another. Or he refused to stop bouncing regardless how hard we smacked the mouse or keyboard. Invariably this would result in his losing a life when, ignoring us, he swam smack into the path of a menacing sea creature. Lucky for us, we always had more lives to spare, but that doesn’t make up for the fact that faulty controls just aren’t fair, now are they?

While 62 levels may seem like a lot, most require only 3-4 minutes to complete, especially if you don’t go hunting around for the one or two secret locations scattered about. Gameplay could have been extended if players were permitted to repeat levels in order to improve their scores by scooping up more coins and jewels. But this game is unforgiving; once a level is completed, off you go to the next one whether you want to or not.

As if to make up for the graphics – which are delightful — the game skimps a bit on the music which is workmanlike but never-changing. Maybe that’s why we enjoyed the change of pace when we let little Kenny rest in one place too long and he launched into a kazatski, the familiar dance that is surely well-known to the developers who are based in Nizhni Novgorod, Russia’s third largest city. Cute.

By the way, we don’t believe it giving away endings, but somehow we expected more that what we got when we completed level #62. We mean, after all that effort, would a fanfare and a few fireworks be asking too much? We don’t think so.