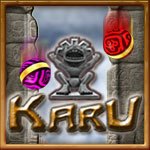 If the metric by which a game can be called addictive is the number of times you forget to blink while playing it, then Karu by GameGekko should have its own twelve-step program. This game requires such constant attention that even a split second of looking away can spell disaster. The heightened tension it brings to a now classic gameplay model cannot be denied.

Graphically, thematically, and by virtue of its core gameplay, Karu must be held up to the mega-hits Zuma or Luxor. There simply is no escaping the comparison. A snake, comprised of a jeweled head and tail and a body made up of colored balls winds along a carved stone track. You pilot (for lack of a better word) a wheeled, Incan stone statue across the surface and drop colored balls down on it, making matches and slowing its advance. Once the snake is destroyed, you collect your points, apply a few eye drops, and do it all over again.

Where Karu differentiates itself is in how you collect those balls to drop. They rain from the sky and must be caught before they can be used, stacking up inside your statue as you whip back and forth across the screen to ensure that none escape. If any balls slip by you and land on the snake as it advances, they are added to its length. If they miss the snake completely and fall off the screen, the snake surges forward with an unnerving hiss.

As you progress through the game’s 89 levels (there is a riddle to solve after level 75, but don’t be fooled – there’s more to the game than that!), the speed of the snakes picks up. The number of colors involved increases. More balls fall from the sky at a faster pace. More snakes line up along the subterranean tunnels. It’s a maddening progression of frantic matching that almost borders on too much. But with that enhanced tension comes a superior feeling of accomplishment and relief when you’ve finally cleared a level.

It is the sort of game that neither has, nor requires, any real depth to speak about. All of the matching action is very straightforward. You catch the balls as they fall and left-click to drop them. The right mouse-button switches which ball in your stack is on top, but unfortunately you can’t always pick the color you want or need. By making matches on the snake, you create gaps in its body, and its pushing tail section has to catch up before it advances further. Sometimes, the head section rolls backwards, which creates a momentary sense of relief.

Power-ups launch into the air from matched combos and, like the balls, must be caught. Sometimes they slow the snake. Sometimes they force it to reverse. Sometimes they give you fireballs or lightning to destroy whole sections of its body. From what we could tell, all of these power-ups were very well balanced, and accompanied by impressive aural and visual effects. After every five levels, a bonus round ensues, with jewels dropping from the sky at an increasing speed. The more you catch, the faster they come and the more points you earn.

The game’s appearance displays a certain crispness, and has a very tight and cohesive appeal. The colors are bright and distinctive against the stony backdrops, the fire and light effects are all well applied, and the whole wrapper on the game-the menus, the scoreboards, the interface that borders the game-all point to a level of attention that we appreciate. Despite the game’s polish, there are a couple of minor oversights including the lack of a score display at the end of each level.

The soundtrack is another area where Karu‘s crispness stands out. There is a constant bass rumble to the game (especially if you’ve got a subwoofer hooked up to your computer). Every little aural pop, from the shattering of colored balls to the dry, rattling hiss of the snake as it advances on you, enhances the experience and really works to build tension.

The game’s one fault is that there isn’t much of it. There is only one way to play the game, and while it is unquestionably fun, Karu should give a little extra, like multiple modes or online scoreboards. The game does not, and relies on its very simplistic appeal to get by. You may prefer to think of it as “focused.”

This is not a game for those who appreciate the slower pace of Zuma. Karu is a frantic alternative that might not appeal to everyone. But for those who want fast action, and a real sense of satisfaction at taking down a relentless foe in a color-coordinated stone snake, this is definitely the game to play.