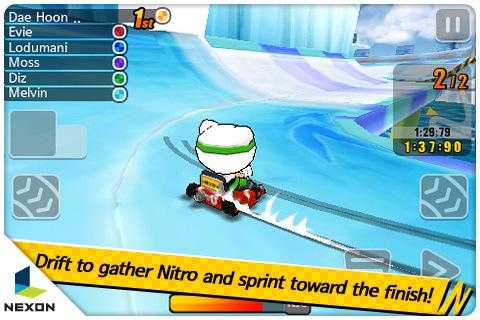 Usually when I begin writing a review, I try to think of some sort of context for a game. Usually it’s relating to other trends in the market or perhaps a different insight into the game. With KartRider Rush, it’s surprisingly easy to sum up the game: No. Just no.

It’s shocking, actually. KartRider in a free online game that’s hugely popular in Asia, boasting a Zynga-like 200 million-plus users. Players race each other in a social network, buying extra items to give them an edge. Given the successful groundwork, coupled with the iPhone’s connectivity, an iOS version seems like a shoe-in.

When you first load up KartRider Rush, you’re treated to a very bright, colorful and detailed world. Everything is shiny and sunny, for lack of better description. The soundtrack, forgettable though it may be, gives you the impression that you’re in for a good time.

Even loading up the first race, things look good. The camera smoothly zooms in, showing your racer on the starting line. This also helps to set the controls at neutral for the tilt steering you’re about to perform. The countdown begins. 3…2…1…

Then the train wreck begins.

Where to begin with this unmitigated disaster? The tilt controls are way too sensitive, resulting in constant oversteering. There’s no way to adjust the sensitivity, either. You’ll be weaving more than a textile artist here. The game does offer a drift mechanism, but the only way to get out of a drift is to quick steer in the opposite direction. Couple that with the oversteering issue, and you’ll be smacking the walls or falling into rivers or cliffs, or going anywhere but on the road in the direction you’d like to. The tilt controls sometimes lags behind your inputs as well, but it’s not like KartRider Rush actually listens to them.

It’s probably just as well that you’re likely going to lose a lot in KartRider Rush. It means that you don’t have to be near other drivers. If you actually do encounter them, be prepared to watch the framerate slow to a crawl, literally around four or five frames per second. Other times, you’ll manage to hit a vertex (the point where two polygons meet) and fly through the road into oblivion. Perhaps the developers were overreaching, or it’s just badly programmed. Either way, it becomes unplayable. Okay, more unplayable.

The two modes in KartRider Rush don’t offer a lot of variety. Speed Mode is a straightforward race to the finish, where the only way to gain an advantage is to drift to earn nitro. Since drifting is physically impossible, this renders the mode mostly useless. It’s up to Item Mode – a very poor man’s Mario Kart – to save the day. 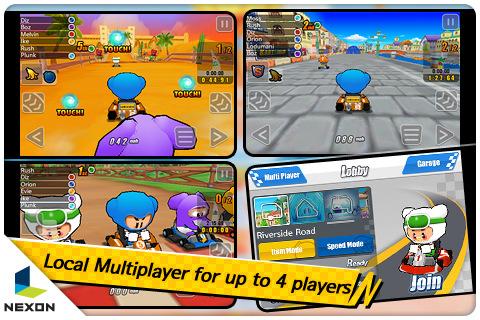 Admittedly, some of the items are pretty cool in that there are iPhone-specific ways to defend yourself. For instance, if a water bubble is about to form around your kart, as long as you tap the three blue balls floating around your car, you’ll be safe. Other times, the idea is neat but the execution is terrible. One particular item forces you to flip your phone upside down for a period of time. It’s a fun idea, until the screen flips back, you can’t react in time and into the wall/ravine/river you go.

Should you actually somehow succeed in a race, but are about to get a second-place finish, don’t just follow the computer player to the finish line. For some reason, they just stop dead at the line. I watched every other character zoom past me while I gratefully earned my last-place finish. At least it ended at some point.

It would be great if you could play with other people like the PC version of KartRider Rush. After all, it’s the social aspect that makes the game so popular, right? Well, with only local Bluetooth multiplayer, it’s not terribly social You can compare your scores to your Facebook friends if you want, but that’s assuming others have downloaded this piece of tripe. To add insult to injury, KartRider Rush warns you to disable your Wi-Fi if you want the optimal connection. Of course, this means you can’t actually upload anything to a Facebook profile. 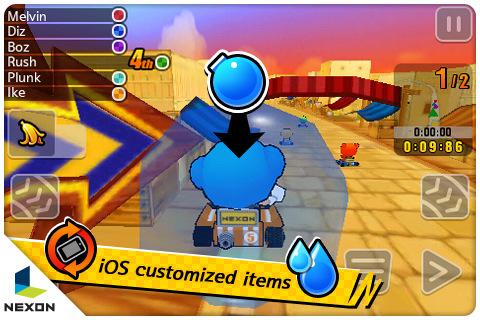 If I haven’t buried the game enough for you by now, know that if you actually want the full KartRider Rush experience, it’ll cost you. A lot. The microtransactional nature of the original title has been horrifically misconstrued to mean “you’ll get three of the most uninspired courses for free along with two mediocre drivers.” If you want more, you’ll have to buy it. The rest of KartRider Rush comes in six “bundles” which add up to an additional ten dollars. This is only way to unlock some of the special “quest” items. Not that you’d want to.

And while you’re searching for things to buy and explore, you’ll likely end up being booted from the game. KartRider Rush crashes harder than Charlie Sheen’s career, with about the same frequency. Switching modes means holding your breath and praying that you’ll get there.

KartRider Rush is a terrible game. In fact, it’s one of the worst games I’ve ever had to play. I was so excited to hear this game was coming to the iPhone, I even pitched to do it. I’m sorry I did. If anything, I hope this prevents others from suffering the misfortune I had to endure to get these words to you. I can think of a ton of things I’d rather do than play KartRider Rush, none of which is repeatable in polite company.