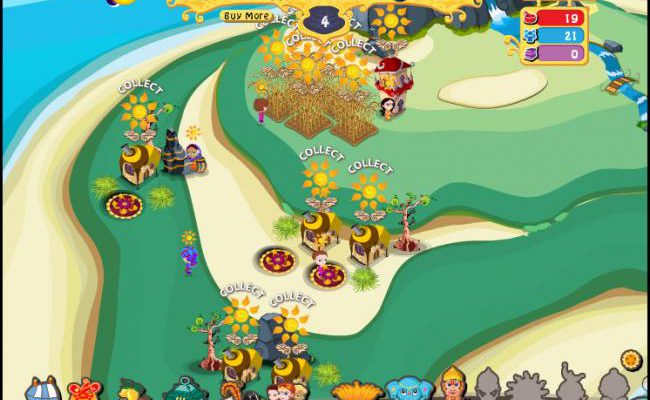 Facebook is traveling to a place of serenity and balance with a new simulation title by the name of Karma Kingdom. Reminiscent of games like Happy Island, the application promotes the concepts of kinship and enlightenment, as well as incorporates the noble endeavor of charity. Nevertheless, in terms of gameplay, the new ideas it does present are often vague and come accompanied with a handful of obnoxious bugs.

Simulation games may be pretty common but Karma Kingdom is certainly taking a new look at it. The game puts you in control of a new island settlement guided by the Hindu deity of Ganesha. Rather than focus on the material, the game centers itself around concepts of enlightenment: goodwill, karma (player experience), health, community, and knowledge. That said, these are merely conceptual representations as the core play still revolves around earning currency in order to develop a larger and more attractive virtual space. 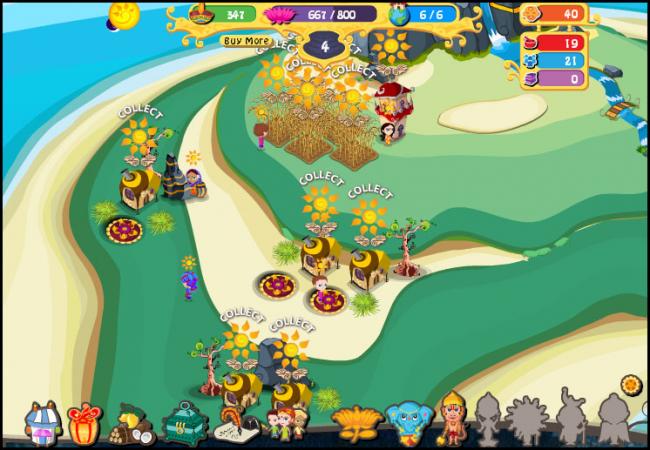 Goodwill makes up the primary currency of the game, and is earned via various structures. The most common way of earning income is by residents themselves. Limited by a population cap (that increases with your level), these homes will periodically grant more goodwill. In addition to these, other structures, such as rice fields, can also be created to generate revenue. These, however, usually take far longer to yield results and are not affected by augmenting decorative components.

The previously noted concepts of health, community, and knowledge come into play here, as certain items will enhance these for residents. Working similarly to decorative elements in Millionaire City, these improve the amount of goodwill garnered from each residential collection. Unfortunately, this is also where some of the ambiguity of Karma Kingdom begins to enter the picture.

It is completely unexplained as to how much these statistics affect play, and there is no way to tell what the difference between them are. This is only the tip of the iceberg though when it comes to vagueness. Another example stems from mysterious crafting materials such as wood, silver, rice, and so on that you can apparently buy with Facebook credits. Though they never become explained, it seems they are used to construct different types of buildings, yet the game never says how to earn them. You might assume that building fields of rice would produce rice, but even after having collected a couple dozen payouts of goodwill from them, no rice has been earned. Along with these unclear mechanics, the app also has any annoyingly frequent tendency to go “out of sync” with the server and force you to refresh your browser window. 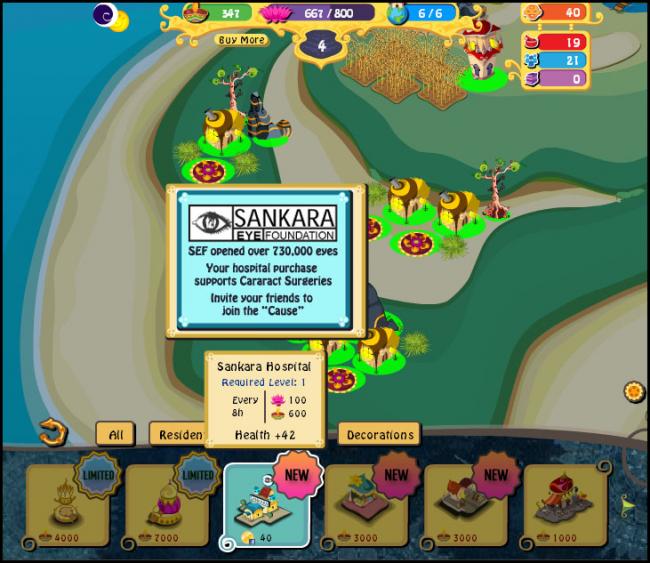 Socially, the application holds the standards of gifting and visiting a friend’s virtual space for daily rewards (extra goodwill). One of the more interesting ones, however, is that you can also post a “Good Deed” that you did recently in order to receive a large chunk of goodwill and karma. Moreover, once you have written it, you can send it to friends to confirm it, earning even more reward.

Another aspect of Karma Kingdom that is certainly worth highlighting is that it is also heavily tied to charity. Within the game store there are a handful of items whose purchase price goes to charity. One such charity comes in the form of the “Sankara Hospital” item that is used to help support the Sankara Eye Foundation which seeks to fight against curable forms of blindness.

Noble though Karma Kingdom may be, the game still has quite the complement of problems. Between general vagueness and a constant server syncing issue, playing the game can be incorrigibly annoying. Regardless, should such qualms be fixed, the title could become a fairly enjoyable simulation app. Moreover, between its core concepts and serene presentation, it’s a game that can also be very relaxing to play. It just needs some time to reach that point.