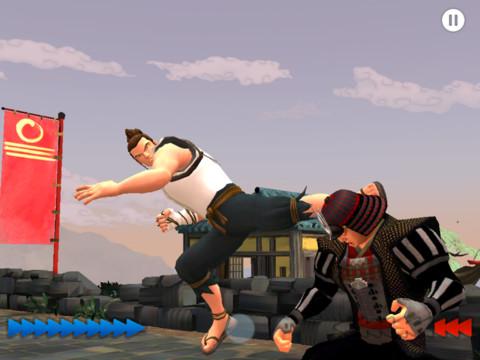 The original Karateka was a beat-em-up released across several computers and video game consoles through the ’80s. Its papa was video game designer Jordan Mechner, who would go on to create a game called Prince of Persia. Maybe you’ve heard of it. The ’80s version of Karateka looks a little primitive, but the concept driving it is still classic. It’s long been ripe for an overhaul, and nearly thirty years later, here we are.

Story-wise, Karateka for doesn’t stray far from its roots. You are an unnamed protagonist who’s kicking and punching your way through the forces of a Japanese war lord in hopes of rescuing your beloved, the Princess Mariko. There’s no text, and no dialogue. The story is conveyed through the music as well as the characters’ glances and motions, and it’s quite well done.

Gameplay-wise, Karateka has received a major overhaul. Your fights with the warlord’s henchmen are still one-on-one, and you still need to block attacks efficiently before answering in turn. However, blocking and punching requires you to adhere to rhythm and patterns. It’s easy to get sucked into the game’s heartbeat, though all of the punching and kicking (with only one special move to spice things up) gets a bit repetitive after a while.

The original Karateka is infamous for sending Mariko’s beloved back to Start whenever he falls to a bad guy. The new Karateka adds an intriguing feature: When the boyfriend eats pavement, his efforts are carried on by two other fighters that also have their eye on the fair princess. The first successor is a powerful monk with an extended life bar. The second successor is an ox-sized brute that’s almost impossible to topple. In other words, Karateka takes pity on you if you’re a crummy player—but it goes without saying that you want to get the “real” ending by finishing the game with Mariko’s beloved. Easier said than done, as the boy is fragile and has a shorter life bar than the monk or the brute.

It’s good that Karateka features this unique brand of replayability. It’s a short game; you can breeze through it in thirty minutes tops. Some players will love honing their timing and pushing themselves to do better, but others might find plowing through the same sets of enemies a little repetitive.

What’s more, some players might find the game runs choppily on any iOS device that’s not equipped with up-to-the-second hardware. It runs well on the iPhone 5, but there have been complaints of choppiness on the iPad 2, and it won’t run at all on any iPhone that’s older than a 4S. None of this is very surprising, as Karateka is one fine-looking game thanks to its smooth animations and gorgeous backgrounds.

If you can get it running, Karateka offers a short but potent burst of fun. It should bring back good memories for fans of the old game, and the new “three-fighters” rule makes it more accessible for new players.