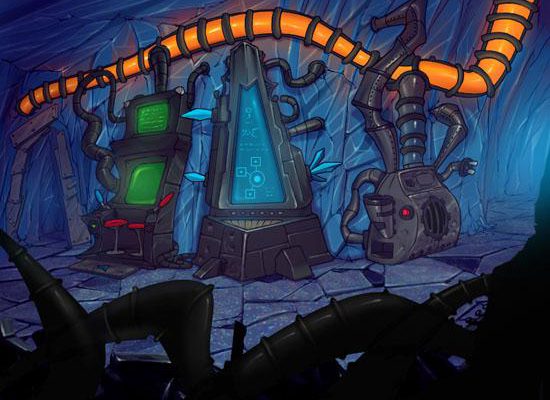 Fun point-and-click adventure blends the past and the future.

In a strange alternate reality, man has already conquered space travel by the mid-19th century. That’s the setting of Kaptain Brawe: A Brawe New World, a new point-and-click adventure from Cateia Games that manages to blend the future and the past into one unique game world.

It’s also filled to the brim with goofy characters, hilarious dialog, and great cartoon visuals. Unfortunately, the game is also hampered quite a bit by some frustratingly obtuse puzzles that will leave many players scratching their heads, not knowing what to do next.

The titular Kaptain Brawe is a dimwitted but committed space police officer, who begins the game investigating a crashed ship on a virtually deserted resort island. But while it starts out simple enough, he eventually stumbles onto a vast conspiracy that will see him travel across the galaxy. Not that he ever really seems to understand what’s going on. Thankfully, he’s joined by a cast of much smarter characters, including the mysterious Luna and a silent but helpful robot named Row Boat. You’ll actually get to play as several different characters throughout the game, switching between them at various points. 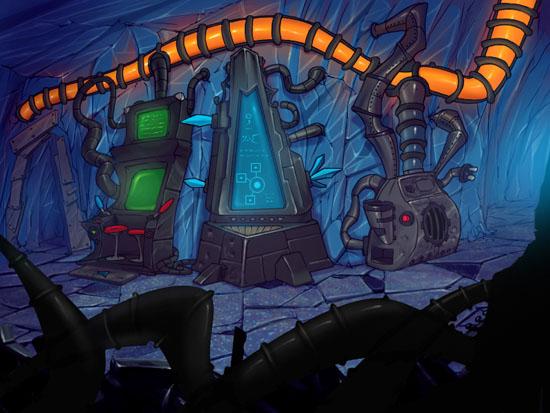 What really makes Kaptain Brawe unique, though, is its sense of style. The combination of futuristic and ancient technologies helps to create an interesting world, one that feels like a vision of the future circa 1805. Sure, there are robots and spaceships, but they’re made of wood and powered by strange crystals. The game also has a strong Eastern European vibe, that further adds to its atmosphere. Brawe speaks in broken English and more often than not doesn’t know the correct way to use a word or phrase. As with most of the dialog, this leads to plenty of humorous situations, though the jokes aren’t always going to keep you laughing. There are few duds, including one particularly unfunny scene that involves some awkward drug humor.

The game itself is a fairly standard, old-school point and click adventure. You can move your character around–and at certain instances switch between two different ones–and the game revolves around talking to characters, collecting and combining items, and then using those items to solve puzzles. About half of the puzzles are straightforward and actually make logical sense, while the rest follow the traditional adventure game theme of being completely obtuse. These puzzles require lots of trial and error, and even when you figure them out to do they often still don’t make any sense. For the easily frustrated, it’s best to keep a walkthrough handy.

Now Kaptain Brawe does attempt to alleviate some of this frustration with a casual difficulty level, and this does help a bit. You’ll get multiple layers of hints for your various tasks and at any point you can click a button to see every point on screen that can be interacted with. But even these helpful features don’t do much to make some of the more frustrating puzzles easier to solve. In some cases missing the tiniest thing will leave you stuck, and even the hint system won’t do much to guide you towards what it is you missed. 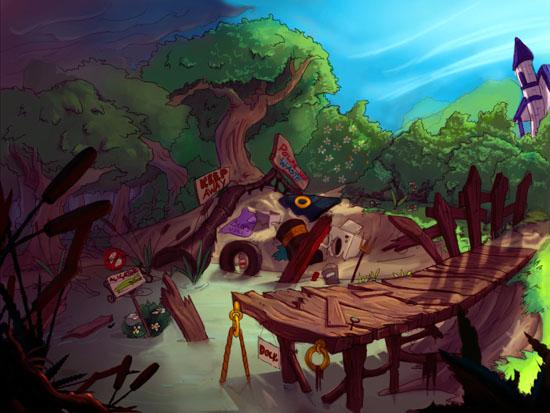 The game does look great, with a visual style that gives the game the appearance of a 1980s cartoon like Heavy Metal. The backgrounds are 2D, but lush with detail and color, and though the characters themselves are actually 3D, their look and animation blends together seamlessly with the backgrounds, so they never look out of place. It simply looks great and there’s a good amount of variety to the locations you’ll be exploring. It should also be noted, however, that Kaptain Brawe is a pretty quiet game. While it has sounds effects and music, unlike most adventure games, there’s no voice acting whatsoever. Instead, all of the dialog is relayed via subtitles. It’s not a deal breaker, but it does feel as though something is missing whenever a character speaks.

Kaptain Brawe is a quintessential point and click adventure: it looks beautiful, has a compelling story filled with interesting characters, and it’s plagued with puzzles that feel more like you’re guessing what the developer was thinking rather than doing anything logical. And even with the casual difficulty level, these puzzles make the game unfriendly to players new to the genre. But for adventure game veterans, there’s plenty to love, from the unique look and setting, to the intriguing plot and great sense of humor.