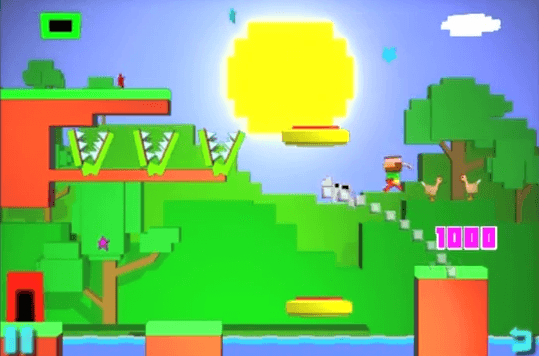 At this point the term “retro” has lost all applicable meaning, kinda like “HD.” Nowadays anything with chunky square graphics is considered retro no matter what the gameplay elements are. I tend to attribute the term retro not so much to games that look like older titles but rather games that PLAY like older titles. Kami Retro has glimpses of these elements, but trades more on its main character being square than it does in old school gameplay.

If there’s a retro connection with Kami Retro it’s to the old PC game Lemmings, where you have to guide a multitude of little creatures to safety. It’s a tenuous connection at best since Lemmings’ hook was that you could give the little things tons of jobs to do like dig or climb or block a path. In Kami Retro you move around props like jump pads and then guide guys to safety yourself while collecting on-screen stars for bonus points.

The controls work well and are very precise both in placing props and in controlling your wards. Swiping left and right over them change their direction and an upward swipe makes them jump. It all feels very natural, and never once did I have a situation where a character did something I didn’t ask it to do, nor did one ignore any of my input. There’s nothing more frustrating in a game like this than to have poor control over what’s happening on-screen, so this was good to see.

The main issue with the game is one of repetition, and not the good kind. Once you move elements around and get your stuff in order there’s a good feeling of satisfaction, but it’s ultimately temporary. Once you guide a man to safety, for whatever reason the game just has you go through those motions a few more times, just doing the same thing over and over. Same jumps, same turns, same star grabs. What purpose does this serve to just do the same thing five times instead of one? Asides from artificially lengthening the game without putting in any extra development work, I can’t imagine a one.

The other issue that really drags the game down is how long it really takes to get moving. There must be 12-14 levels that are just much too boring for their own good as they hold your hand time after time. It’s meant to be a tutorial, but really just bogs down the experience. I’d be willing to wager a good chunk of people that download the game won’t bother to even get past these initial stages – it’s that boring. This is a shame, because after that slow start the rest of the game’s 60 levels are much better.

By the end of playing the game it was a bit redeemed in my eyes, but only marginally. The slow start and the repetition in the levels ultimately just left me feeling “eh.” It’s one of those titles that left me feeling totally ambivalent about it, with no strong feelings to either tell people to avoid or buy the game. Probably not the way the makers of Kami Retro intended me to feel after playing, but with the problems mentioned above there’s just no other way to feel after playing it.