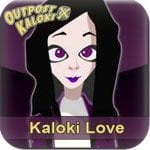 Dating should be simple: a box of chocolates, flowers and a nice dinner should be all that's needed to impress a nice girl. In the future, however, apparently the ladies require you to build entire space stations in order to win over their hearts. Kaloki Love, an iPhone game from Ninja Bee that expands on the original space tycoon game, Kaloki Adventure, proves that love is all space stations or black holes as it follows a new station manager, Roger, on his search for true love.

Kaloki Love is pretty much the exact same game as Kaloki Adventure except it's smaller and more story-driven. As Roger, the new station manager, you must build, manage and maintain your space stations the same way as you did before in Kaloki Adventure but this time you don't just have your customers to appease, you also have four girls to impress.

Each girl has her own unique personality as well as their own requests for the space stations. If you build everything one certain girl request during the five levels of the game, then you will end up winning that specific girl over in the end.

On top of the girls' requests, you will also have other goals you will have to meet in order to clear the level, so remember that you still have to build, manage and maintain your space station businesses in order to ensure that they are profitable.

You will have five different business types to build from, each with their own upgrades, plus you still have to built power supplies and garages to keep your businesses up and running. The game provides you with a monitoring system in order to keep track of your customer's needs, your money, your goals and your station rating.

The controls are all touch screen-based. Menus and actions are activated with a touch of the pad on specific icons or points on the station. For example, new businesses are built by tapping the screen on one of the station's free extension points in order to bring up the build menu. To view your station from different angles, you simply hold your finger on the screen and move it around the pad to move the station around.

Kaloki Love lacks the degree of humor and challenge as other Kaloki games, which is a big part of what makes this series so great. The requests from the girls make the game feel uneven, too, which slows the pace down. You would have to wait on a girl to send you a message before you built anything else for fear you end up with the wrong girl in the end.

The control scheme remains flawed like its previous installation, Kaloki Adventure, with delayed reactions and impossible to hit small icons. Even the graphics continues to slow down under heavy amounts of screen activity.

The cartoon graphics were continued over from the first game along with the 3D builds of the space stations. I especially loved the design of the four girls you get to pursue in the game as each is unique and so darn cute. The music hasn't change either since the first game as you still has to listen to the same big band number over and over again.

Even though the game is only $0.99. This game has none of the fun challenges and humour that the first game had, plus it's only five levels. Ultimately this is one Kaloki universe add-on you can live without, but you insist on checking it out, there is a demo version available for download on the iTunes stores.