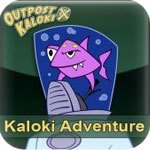 Hard to believe that anyone could be a hero while running a space station but I guess if Commander Sisko of Deep Space Nine can do it, then why can't we? Kaloki Adventure, a simulator iPhone game from Ninja Bee puts aside the typical space ship riding hero and his band of alien crew and has you playing a simple space outpost manager destiny for great things. Are you up to the task or will you fail under the pressure?

journey into the Kaloki Adventure's exciting world of space station management begins with a basic tutorial and then a couple of easy missions to test your new skills. At first, it will seem like everything is just going swimmingly, when all of a sudden the Princess of Galactic Empire is kidnapped and you must use your amazing new skills to come to her rescue.

Kaloki Adventure is a very basic city building simulator game that provides you with 14 missions and 6 free-style scenarios in which you can hone your money making skills. Each level starts with a space station with a select number of extension points on which you can build. Each level also has goals that tell you what needs must be met in order to pass the level. Goals can be associated with building types, money, time or station ratings but all levels are passed based on successful stations.

In order to make your station successful, you must start by building a business on one of your station extension points. You have the option of 5 different business types for your station: Nature, Science, Social, Trade and Information. Each business type has several different buildings you can construct, but only once you met their building requirements and earn enough money and power to construct them.

Power is earned through generators which are built like businesses and use up extension points. All buildings must be maintained which is why garages must be built as well in order to keep repair all buildings. They too use extension points. All buildings can be modified to increase power/money/robots but this will also increase their maintenance fees which come out of your earnings. Earning must be more than fees in order to ensure a successful station.

Station monitors are handy in order to figure out what your station visitors what in their venues from nature spots to social clubs. The more red a line is, the greater the need is. Plus it also monitors things like your money, power and station rating.

Controls in the game are all pretty simple: everything is pretty much accessed or activated by tapping on it. Buildings are created by tapping on an extension point and opening up the build menu, for example, while you can modify any existing building by tapping on top of it.

To view your station, you can place your finger on the screen and roll it around the screen to move your station and access it from all angles. Some visitors may want to communicate with you during the game; you can bring them up by tapping on their icons with the exclamation points above them.

While you would think saving the galaxy from the inside of a space station would be somewhat boring, Kaloki Adventure actually makes it quite funny with its goofy humour and clever missions. Each level adds just a bit more challenge to it with its ever changing goals and obstacles. Its addictive game play and medal reward system will keep you coming back from more.

The upbeat big band music while pretty fun to listen to at first, will get annoying after the 100th time you hear it on repeat. I did like the cute alien gibberish that you get over each message in the game which reminded me of the Jawas from Star Wars as well as the colourful cartoon people & aliens which also seemed to be influenced a lot by Star Wars in its character design. The 3D stations and space ships were too bad to look at long as you didn't zoom in on them because the camera had a habit of zooming right through them.

My only real disappointment in the construction of this title how badly this game transferred over from the Xbox Arcade version to the iPhone. The tapping controls were very unresponsive and in the later stages of the game, movements in the game become eradicate due to the amount of activity on screen and any delay in game moves can eat up time needed to make a mission's goal.

This is the first official iPhone game I've had the pleasure of checking out and I must say I'm kind of stuck in the neutral zone on this one. On the one hand, I love this series and own its Xbox Arcade counterpart, Outpost Kaloki X, which I would recommend to anyone in a heartbeat, however it's hard for me to recommend the iPhone version when I know that the game didn't port over well. I guess I'll have say if your only option is the iPhone version, then definitely pick it up for $2.99 and hopefully your version will run better than mine did on my iPod Touch.