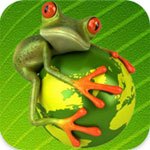 I play a lot of games. All kinds of games. Puzzle games, arcade games, pinball, Wii, music games, hidden object games, time management games, match three games. I don’t want you to think I’m bragging. It’s just that I play a lot of games with my family. Family times have always been focused around playing games together. And most games I can finish or score very high if I put my mind to it. So, I was quite disheartened when I started playing Kaeru Jump to find that it took me a really long time just to pass the first level.

I have to admit that, even though I did work my way through the tutorial (twice), I kept getting stuck because Kaeru Jump is so much like the classic Peg Jumper game, with one very important difference in the rules.

You’ve probably seen an old-school, non-digital version of Peg Jumper on the coffee table at a friend’s house. There is a wooden board of some geometric shape with a certain number of holes punched into it. Then there are metal “pegs” scattered through the various holes. The game is to move the pegs by jumping over, and capturing, other pegs, until all but one peg remains. You can move in any direction, but you can only capture one peg at a time and there must be an empty slot (or hole) for you to jump to. Sometimes you’ll find this style of game as a mini-game in a hidden object or adventure game, too. It’s a very popular game mechanic.

So, when I first saw Kaeru Jump, I thought it was an animated version of Peg Jumper, with jumping frogs replacing the pegs and stones replacing the holes. Clever, I thought. Even more clever is the integration of “frog fun facts” which gives you (between levels) such frog trivia as “Frog bones form a new ring every year when the frog is hibernating, just like trees do. Scientists can count these rings to determine the age of the frog.” Who knew that frogs and trees had so much in common? You’ll also see a high quality photo of a cute little tree frog (that is if you think frogs are cute).

But make no mistake, Kaeru Jump is NOT Peg Jumper. The strategy is very different because there are two basic rule differences. First of all, you cannot jump your frog in any direction. If he is facing backwards, you cannot jump him at all. Also, he can only jump horizontally or vertically, and never diagonally. So, in order to make a legal jump, the little guy has to be facing a stone either straight across or down, and there are no exceptions. It is these restrictions on the jumping rules that makes the game so difficult and unfamiliar. It turns out that the only correct solution to each puzzle involves finding a continuous, circuitous route for your amphibian where he is never forced to go backwards, because once he cannot jump over any stone is not facing.

All of this explanation is to say that I have put more hours than I would like to admit into playing Kaeru Jump, and I am ashamed to say that I have not progressed very far. There are two basic modes. Classic mode involves moving from one puzzle to the next, accomplishing as much as you can in 60 second rounds. The other mode, called 100 map journey, is 100 puzzles strung together to give you the sense of progression. I do agree that each puzzle on the journey map appears to be getting harder, though I could not get very far.

So, my advice to those who might be beguiled by the colorful, cute frog graphics and the intriguing puzzle gameplay, be very cautious about this game. It is one of the hardest puzzle games I’ve played from the App Store. It is possible that some people really enjoy these types of puzzles games because their brains are hard-wired to see the solution more quickly and easily than the rest of us. For those select few who have this vision, Kaeru Jump might be a good value. Certainly, there are enough puzzles (well over 100) to keep you busy for many hours. So, for those so inclined, Kaeru Jump would provide significant value. But for the rest of us, it might just be an exercise in froggy frustration. I would most definitely suggest trying the free LITE version before buying this app.