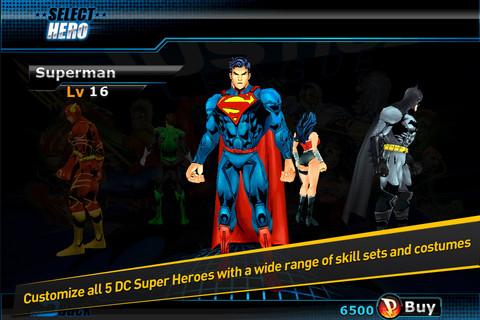 Annihilate the Legion of Doom with nothing but your fingertips

What do you want out of your superhero game? This is a question that I’ve been forced to ask myself recently. With a summer full of hero movies, iOS has been packed full of games centered on recent blockbuster pictures. Despite releasing games with great ambition, I couldn’t get into Gameloft’s recent Spider-Man or Dark Knight Rises games. However, with Netmarble’s Justice League: Earth’s Final Defense title, I think I finally know the answer to my question.

I want to feel like I’m the hero. I want to trash a non-stop spawn of minions, unleash multiple powers, and take on a ton of classic villains. And while Justice League isn’t quite perfect, either, it ended up being just what the doctor ordered.

As a linear beat-em-up, your only goal in Justice League is to wreck as much evil as possible while following a straight line. This formula takes plenty out of the book of old-school arcade side-scrollers (such as the fact that you’ll never have to bother with controlling the camera), but it adds a Diablo-like leveling system into the mix as well.

From the get go, you have the option of picking from three justice league heroes: Batman, Super Man, and Wonder Woman. The Flash and The Green Lantern are available as unlockable characters for points, as well. Each character has their own unique array of melee and ranged attacks to deal with the Legion of Doom, and the characters feel fairly balanced against one another. Personally, I decided to give the Man of Steel a go for a majority of my adventure, and I loved him.

As you beat your way through the stages of multiple areas, your hero will level up fairly often. Each new level allows you to increase your stats and select a modifier for one active or passive ability. The leveling system is fantastic, and it allows you to naturally increase your goon-dispatching capabilities with increased performance.

By the end of my adventure, I was able to fly up, hit my opponent from above, uppercut them, keep them floating with a blast of heat vision, unleash a flurry of ice breath, and deliver a dash attack at the end of my 30-hit combo in order to fell a single very unlucky minion. Discovering combos with your abilities is plenty of fun, and really makes you feel like an unstoppable force.

The only drawback to this is that it can be hard to try new characters once you’ve found one you really like. I had a level 25 Super Man that could break dozens of enemies before they even had a chance, and it was pretty tough to leave him in order to try out all the other level 1 characters. There’s a lot to like about everybody, but chances are likely you won’t feel compelled to compete with the whole team.

While Justice League does use an in-app currency, it thankfully has no impact on the game’s fantastic leveling system, and it can be earned very generously through natural play. Points can be spent on modifier cards in the form of unplayable DC superheroes, new costumes, and unlockable characters.

By the time I’d finished the main adventure, I was able to purchase almost everything that I’d wanted. While a few boss characters were challenging, I never felt like I was forced to purchase anything out of pocket beyond the game’s opening cost. And even if you find yourself getting stuck at a portion, you can always venture to past stages and level yourself there. 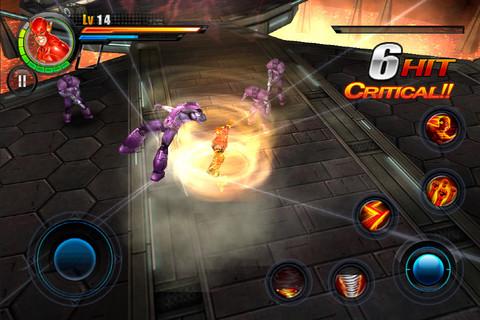 My only gripe with Justice League is that it isn’t a particularly gorgeous title. The bright colors on character models fit the game’s comic book roots, but the blurry textures across every environment aren’t exactly gorgeous. While level interaction is at a bare minimum due to the game’s linear style, it’s still pretty hard to settle for a visual downgrade after checking out the superhero titles offered by Gameloft.

Whether or not you enjoy Justice League: Earth’s Final Defense will heavily depend on your taste for beat-em-ups. If cruising through wave after wave of similar disposable baddies in order to reach a challenging boss sounds repetitive to you, than the game might not feel so super. But if you’ve grown up on arcade classics and are looking for a cheap way to relive the thrill of incredible combos, then this is a must buy.