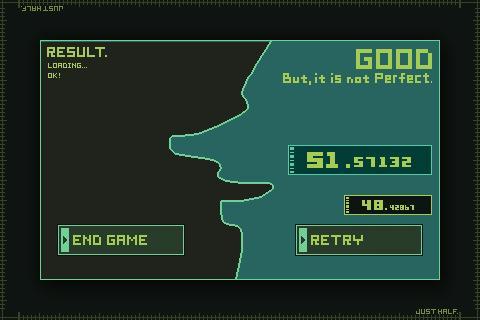 Just Half is just a game about just one thing: just dividing rectangles just in half. The game makes the cut, and more than only just.

Just Half relies on a very simple gameplay concept. Players need to trace a line inside a rectangle in order to divide it into two identical areas (though not shapes). The game calculates the area as a percentage, down to five decimal places. Get one half in the 51-52% range, and you pass. Make one half in the 50-50.99999% range and you earn an extra life. If you make one half bigger than 53%, you lose a life. Lose all your lives and it’s game over.

The only other thing you’ll need to worry about are the targets inside the rectangle, which you need to trace your line over. As the difficulty level increases, the number of targets increases as well as awkwardness of their locations. Most of the time you need to think very hard about how to shave bits off one half in order to equalize the areas. Some of the later levels are quite clever, forcing you to draw shapes like a facial profile.

The game has just two modes. Just Half mode is the just-mentioned increasing level gameplay, while Perfect Half mode is about carving a blank rectangle perfectly 50-50. The problem, of course, is once you are able to conquer Perfect Half, Just Half ends up being the only mode you’ll ever play.

Fortunately, Just Half‘s accuracy isn’t just good, it’s great. Tracing your finger along the screen is really precise. It seems accurate down to the individual pixel. Considering how harshly Just Half calculates the percentages, this is a very good thing.

The graphics and sound, too, are quite good. Just Half sports an old-school green-and-black monochrome look, while the ambient techno soundtrack helps keep you focused on getting each half just right, without distracting. The game has just the right mix of style and minimalism. It’s very nice.

The downside, though, is Just Half is about as old-school arcade as you can find. The notion of a game doing only one thing – think Space Invaders or Tetris – isn’t new, but isn’t often done these days. And, for better or for worse, Just Half spends its time just splitting rectangles, and nothing else. There are no achievements, unlockables or any worldwide leaderboards (a must for an arcade game like this). There’s just nothing extra.

The good news, though, is that it is a head-scratching good time. Just Half will have you shaving every pixel until your division is just right. It’s a shame that there’s just one thing to do here, but it is done very well. Just finish reading this and give Just Half just a moment of your time. You’ll be just so happy you did.