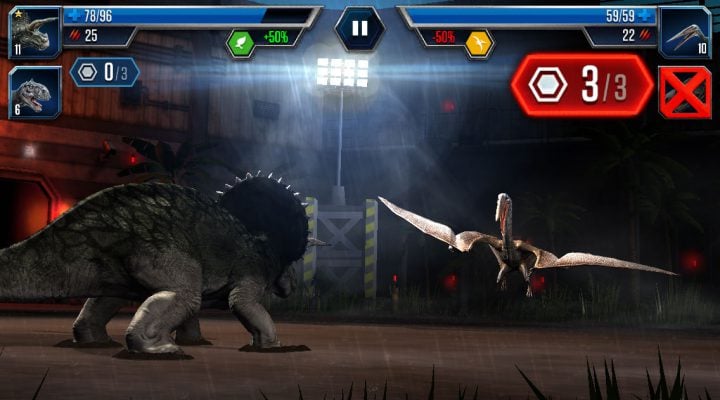 Dinosaur fighting is a bit interesting, but overly-simple.

The Jurassic World movie has an interesting and relatively realistic premise (as far as dinosaur fantasy goes, anyway): Genetically-engineered dinosaurs, having been in captivity and on display for some time prior to the film’s beginning, have lost their all-important “Wow!” factor.

So the Park’s scientists (a species with a history of bad decisions) do a little more genetic juicing and create Indominous Rex, a true monster of a dinosaur. I-Rex does what’s natural to monsters: She escapes and causes mayhem.

The premise for Jurassic World isn’t exactly scientifically sound, but at least it appears to be fun. By contrast, Jurassic World: The Game combines mediocre park-building with mediocre dino-battling. It’s competent and by gosh it (mostly) looks glorious, but there isn’t a lot here that differentiates the game from standard park-builders. 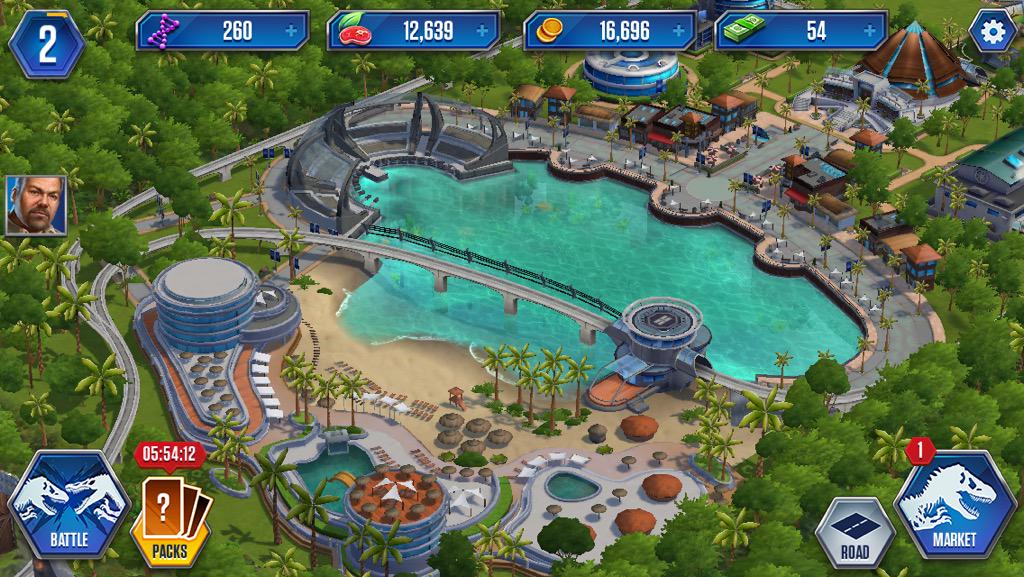 As might be expected, you build up your new park – the titular Jurassic World – from nothing. With hard work, perseverance, and a lot of dino pit-fighting, you should hopefully have an attraction that’ll keep those dang kids off their “smart phones” for ten seconds.

The park-building aspect of Jurassic World: The Game doesn’t offer anything super-new or exciting. Dinosaur exhibits bring in money over time, as do supplemental structures like food stands and security offices. It’s pretty much Jurassic Park Builder part II, except the parks you create in that three-year-old game seem a lot more colorful and joyful than the washed-out grey fairgrounds you create in Jurassic World. 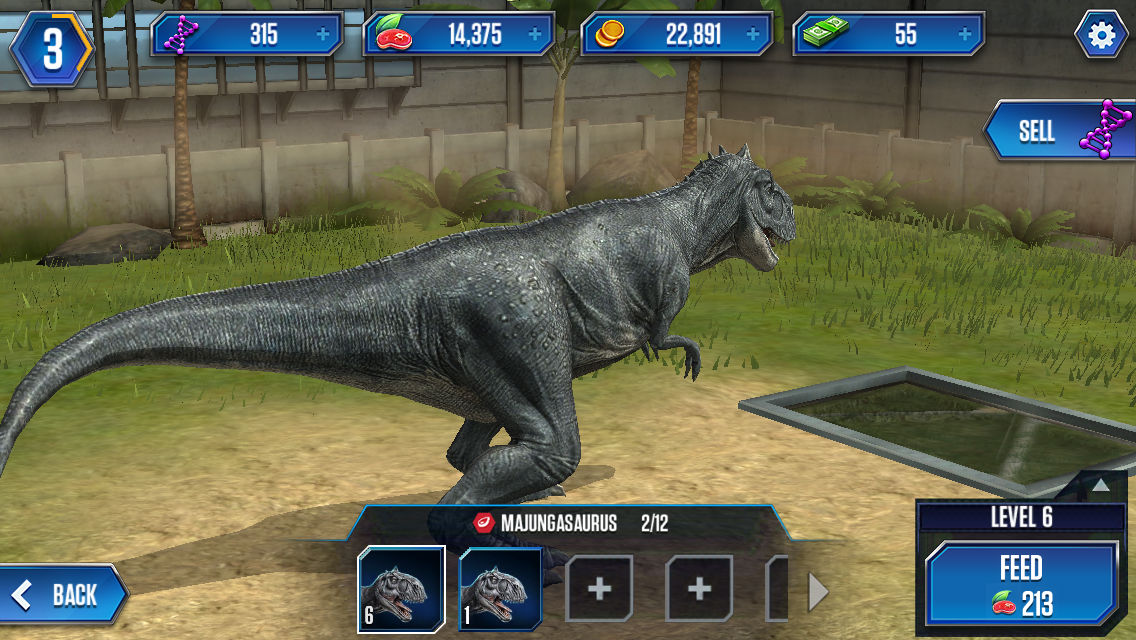 That may be because most of Jurassic World: The Game’s resources went into the dinosaur models, which admittedly look and move like the real deal (or our best guess thereof). The beasts stomp, roar, fan their wings, and scarf down whatever meals you provide. When you evolve your scaly pals for better battle arena performance, they take on brighter hues and interesting markings. Incidentally, be warned: This game won’t work on anything lower than an iPhone 5S, iPad Air, or iPad Mini 3.

The battle arena is Jurassic World’s most interesting feature. Fighting dinosaurs square off in the arena and attack each other via a point-based system. Points can charge attacks or augment defense, and turns can be skipped in order to build up more points for your next turn. It’s not exactly Dino Street Fighter, but it’s entertaining enough. 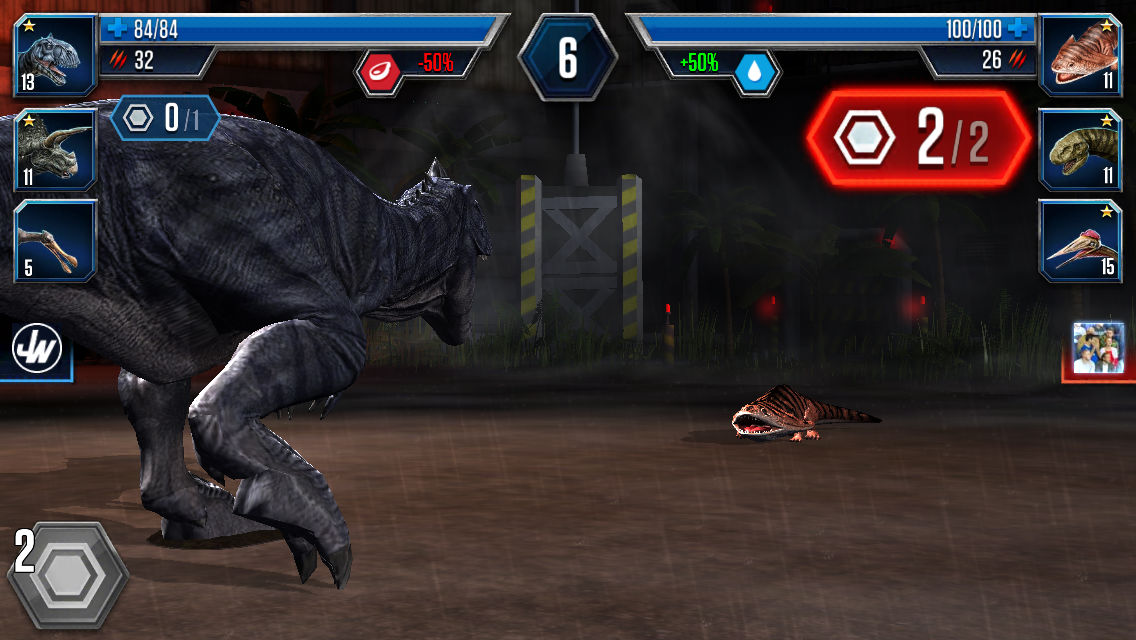 The stronger a dinosaur is, the harder it hits. Natural strength counts for a lot, so you probably don’t want to pit a camposaurus against a diplodocus. Also, you can fight against other players, but since the match-up process seems more random than level-based, you can expect to get creamed at least once.

There’s nothing overly offensive about Jurassic World: The Game (except for its hardware requirements), but aside from its fluid dinosaur models, there’s nothing very exciting about it, either. Maybe it would’ve fared better as a park-builder or a dinosaur-themed fighting game instead of a mix of the two. It says something that your mind wanders while playing. You start thinking about your email, your cat, and what you want for dinner. Suddenly, it’s easy to sympathize with the young park-goers that would rather text their friends than watch the T-rex gobble up a goat.