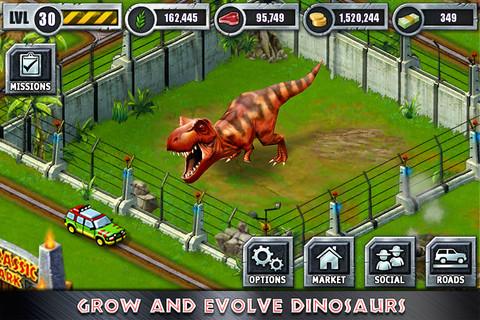 “Welcome to Jurassic Park! Now you can tuck us in your pocket!”

If any combination of words is capable of making your inner child sit up and take notice, that combination should be “Jurassic,” “Park,” and “Builder.” After all, the implications are fascinating. Who wouldn’t want to build their own dinosaur park, raise raptors, feed goats to Tyrannosaurs Rexes, and hopefully keep everything from going horribly wrong this time (we suggest thoroughly inspecting every can of shaving cream that comes into the park)? Jurassic Park Builder for iOS doesn’t really offer an outset that’s as exciting as the movie that spawned it, but it’s still a very decent park-building game that lets you manage some fascinating attractions.

In Jurassic Park Builder, your job is to build and maintain the new Jurassic Park. True, things didn’t go so well the first time, but nothing should ever get in the way of dinosaur revival—even the risk of the animals going out of control and eating nearby mammals like so many piles of popcorn. Building up the new Park means clearing away foliage, decoding dinosaur DNA, managing food supplies and feeding the beasties to help them gain levels (which, in turn, earns you more money), adding decorations, buildings, and laying down tracks for those neat tour-car things to travel along.

Some familiar faces are on hand to help you out and give you quests, including Dr. Alan Grant, John Hammond, and Dr. Ian “Spoilsport” Malcom. Even Malcom’s daughter, Kelly, shows up.

Unlike most zoo management/building titles, you can’t simply visit the in-game market and say, “One velociraptor, please—hold the bitey.” Jurassic Park Builder requires you clear away rocks and trees to locate bits of amber cloning DNA trapped inside. 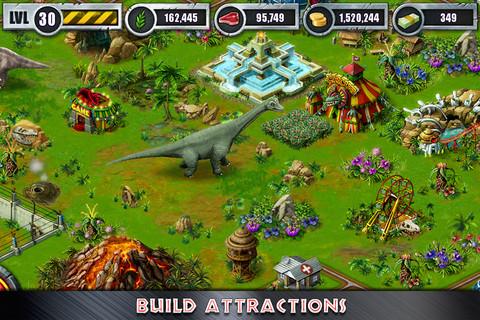 You know the story: said amber contains the unlucky, bloated corpse of a mosquito that was flash-frozen in tree sap shortly after snacking on dinosaur blood. The valuable genetic info in the skeeter’s tiny belly is “unlocked” in the game’s lab. Unlocking DNA can take several attempts and a lot of soft currency, but if you’re successful, you’ll have your very own dino egg. Some species to aspire towards are the ankylosaurus, the baryonyx, and of course, the belly-slicing velociraptor.

Once your dinos are in place, the action in Jurassic Park Builder is pretty standard for a zookeeping game. You collect money from your dinosaur attractions, you perform certain tasks to earn additional rewards, and you aspire towards bigger dinosaurs and better upgrades. Once in a blue moon, you’ll be given the option to respond to a “Code Red” emergency (storms, attempted dino escapes), which is a great way to rack up a lot of soft currency in a short time. 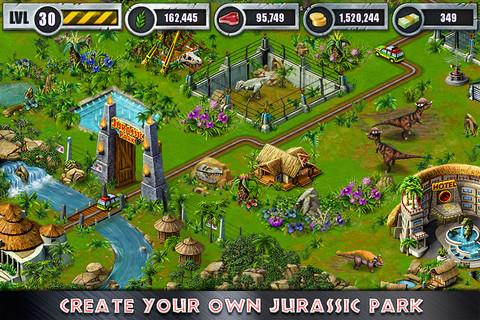 While there is a decent selection of dinosaurs in Jurassic Park Builder, it’d be nice to see even more. To be fair to Ludia, though, no amount of dinosaurs can possibly be enough. That said, the game’s selection of decorations and buildings is kind of sparse, though the dinosaurs themselves are far more interesting, anyway. They walk, they charge, they stomp, and they vocalize with an impressive library of snarls, squeals, and grunts.

Jurassic Park Builder‘s core gameplay certainly doesn’t break new ground, but it builds a solid experience with its old materials. Even if you master dinosaur wrangling, however, don’t get too confident: life finds a way (to eat you alive).