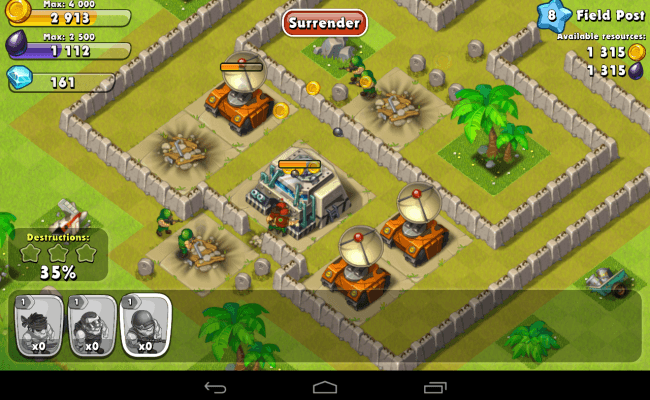 Welcome to the oh-so-familiar-looking jungle

I’m going to come right out and say it: My.com’s Jungle Heat offers almost nothing that makes it a fresh or original experience. Outside of the jungle theme, it’s hard to find any way that it stands out among the competition. That said, its lack of originality doesn’t make it a bad game. While it will likely be lost amongst more prolific strategy titles, Jungle Heat makes for one of the genre’s most accessible entry points for Android gamers.

Players who are familiar with titles such as Supercell’s Clash of Clans, KIXEYE’s Backyard Monsters, or Kabam’s Edgeworld will immediately know what to expect from Jungle Heat. The gameplay successfully combines strategy with city building and generally presents the best of both worlds. After a brief tutorial of the game’s core functions, you’ll be left to learn the rest as you go. The game has an achievement list that can help track progress a bit, but there’s little guidance for players new to the genre. Players are expected to learn as they go. This approach isn’t necessarily wrong, but it can cause a bit too much of a learning curve for some individuals. 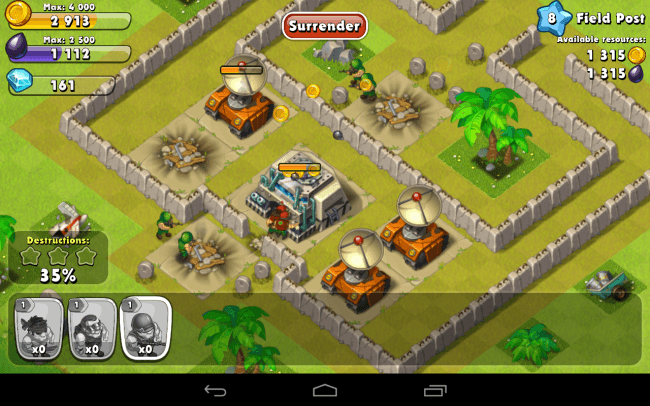 One of the major objectives in Jungle Heat is to build a base that can mine a ton of resources (gold and oil), as well as protect the command center from enemy attack. When you’re not under the veil of protection, your base is constantly available for other players to just wander in and strike. If they manage to destroy the command center, the battle is theirs. However, suffering other major damage can be just as devastating. Like other games, everything in Jungle Heat is done on real time. If a structure takes two hours to build or repair, you have to either wait two hours or pay diamonds (the premium currency) to finish. This approach has found financial success, but playing the waiting game has never been fun, and this is no exception.

When you’re not beefing up your defenses, you’re able to assemble an army consisting of dozens of troops among a handful of classes. Each class has its own strengths and weaknesses, and knowing their best uses is necessary for success. The single player mode does an excellent job at helping improve strategy without blatantly saying how to approach a level. Each stage features a base that’s a little harder to destroy and is a little better at crushing your troops. While the difficulty spikes a little too quickly, the three-star rating system and the linear map is a nice touch and somewhat makes up for a lack of guidance. 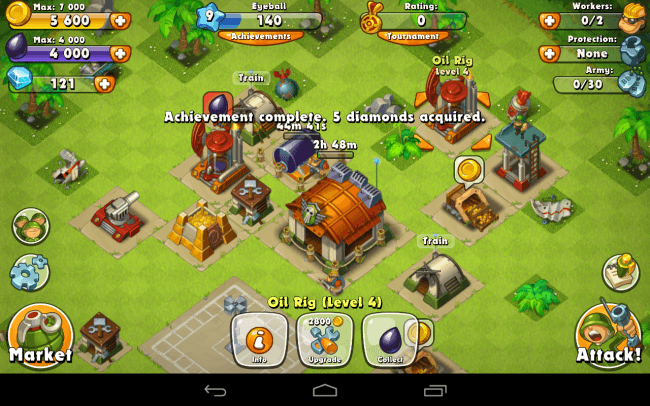 On the other hand, almost nothing helps multiplayer be all too fun. When you’re ready to attack your opponent, you can pay a small amount of gold to check out a base. If you like what you see, you can attack. If you want to try again, you can pay more gold. It’s nice to not have to commit to an attack. Unfortunately, the quality of opponents feels like a bit of a crapshoot. One match, you’ll find someone with a seemingly impenetrable fortress, and the next you’ll find someone who obviously just started playing. With the implementation of leaderboards and weekly tournaments, a hub or world map would make the system easier to abuse. However, the randomness of the process as it is makes it a bit more frustrating than it’s worth.

The only thing really keeping Jungle Heat from burning to the ground is the fact that there are few decent games of its sort on Android. It’s not a bad game and it certainly doesn’t do much worse than other games in the genre; it just doesn’t do anything well enough to recommend over the others. Combat is usually both fun and challenging, while the strategy behind city-building will challenge players new to the genre. If Android is your mobile device of choice and you want strategy on the go, you could do much worse.